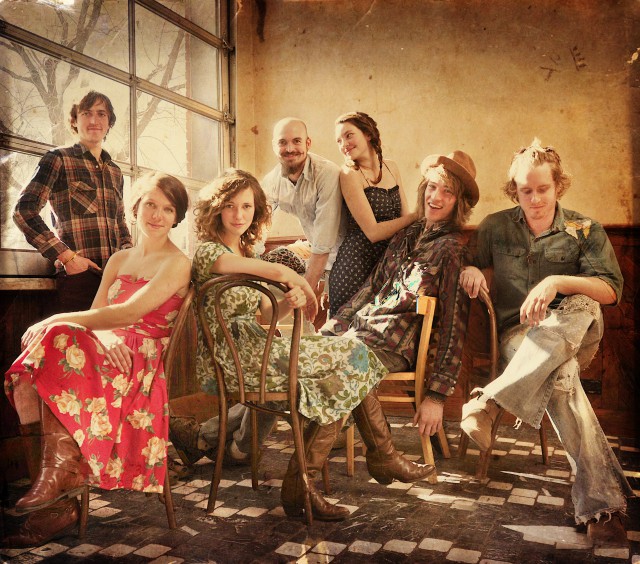 For any band, breaking out of the hometown turf and onto the national scene is a laborious task. For bands on the Front Range where touring means plowing through hundreds of small-scale, mid-America spots to get to either coast it can be even more difficult to garner the kind of exposure needed to finance touring and recording while maintaining any sort of independent ethos.

A seven-piece outfit of bass, trombone, trumpet and vocal harmonies, Paper Bird is at a crossroads. Since its inaugural 2007 release, Anything Nameless and Joymaking, the band has experienced grand local acclaim from readers’ polls and music showcases. In 2008, it was highlighted on the bill of New Belgium’s Tour de Fat cross-country circuit. And this year alone has brought two new EPs A Sky Underground and Paper Bird Live at Twist and Shout, coming Oct. 6 as well as a tour smattered with big-name festival spots like the High Sierra Music Festival, 10,000 Lakes, and Denver’s Mile High Music Fest.

But for all the applause they’ve received for their hard work, these DIYers are looking at greener pastures. Though they’ve enjoyed the freedom of self-releasing, Paper Bird banjo player Caleb Summeril notes that it might be time for the band to break out of its shell.

“We might start looking at new opportunities with record labels and such,” he says. “Right now, we’re just doing it all on our own and that’s the way we are on our own. But we’re looking at some bigger-picture things, seeing if we can get some national or international support to help our exposure to larger audiences.”

Though nothing is officially in the works in terms of contracts or labels, it’s clear that Paper Bird is ready to shift gears. This, after all, is a band doing everything in their power to make their venture a full-time career.

Will they make it on the national scene? Considering the momentum their journey has gained thus far, it’s entirely possible.

The band started after a few friends decided to get away for a trip up to Summeril’s uncle’s cabin in Breckenridge. With a banjo and a guitar at their disposal, a friend suggested they write a song.

“So we did,” says Summeril. “And then we wrote another one. And then a couple more.”

With a few rehearsal rounds, they decided to take their newly crafted tunes to the streets of Breckenridge. The result was inspiring.

“We made a couple hundred dollars from the passers-by,” says Summeril. “So we thought, ‘This is a pretty good idea.'”
And so Paper Bird was hatched.

Despite a humble first gig on the streets, the band has been nothing if not ambitious ever since, and their music reflects that combination of whimsical spark and certitude. The female harmonies float against a background of straw-chewing strings. An added horn expands the sound into a bolder territory. And still the lyrics are sweet and warm.

They’re the kind of band you’d expect to hear on Sunday morning NPR the kind that has a wide appeal to hipsters and alike, that is smooth but still evocative. It’s part of the rootsy Americana flavor that has experienced a strong resurgence in the past decade.

“It feels good for people to have a music that is super accessible that they can play on their back porch but can also go see live and have it be a great show,” says Summeril. “I don’t know exactly why it’s popular, but I’m happy for it.”

But though their fan base keeps growing, it hasn’t always been smooth sailing.

“It was pretty bad,” he says. “It was his face. His lips were split in half. There was a minute there where we didn’t know if we even had a band for much longer. The doctors told him he would never play trombone again, but two months later he was howling away, so it was pretty remarkable.”

With Archuletta back on board, Paper Bird used the mishap to re-evaluate.

“We just wanted to get the heck out of Dodge, so we tried it,” says Summeril. “Looking back, it was kind of a wake up call for us to slow down and think things through a little bit more.”

And since the accident, the road has treated Paper Bird quite well. The band picked up a working team, including booking agents, to help manage their tours. For the past two summers, they’ve toured on a bus that runs on vegetable oil and solar panels. And as for the shows?

“It’s been great,” says Summeril. “I don’t think we’ve been to a place where we haven’t said, ‘Let’s go back and do more.’ We’ve been well-received, and now it’s just a matter of trying to go back [to those places] and do it again and bring people closer to our music, which is what it’s all about.”

But for a band, the road is still a place for proving. With a new EP to be released Oct. 6, Live at Twist and Shout, and the final touches being put on a new full-length release, Paper Bird is preparing to get back in the saddle again. But not before some hometown celebrations, including their upcoming headliner at Boulder Theater, where the band plans to explore new ground by building their own set, playing new songs and renditions, and a few other not-to-be-mentioned surprises.

“We feel like we’re pretty established here,” says Summeril. “We’ve played more shows here than anywhere else, and people come back again and see us. They sing along with the words, and we get to see a lot of our friends and family and experience that hometown vibe.”

It’s a feeling that Paper Bird wants to extend on the national circuit, to make it beyond the Colorado scene and to have, as Summeril puts it, “all those other places we’ve been feel more like home.” In the meantime, however, the band will focus on using their talents to pay the rent.

“That’s been one of the main struggles, is just figuring out how to be successful, but also keeping it in tune with how we want it, which is light-hearted and fun,” says Summeril. “It’s been interesting, and it’s been hard. But you just have to work at it. For now, we’ll focus on the music and playing good shows.”