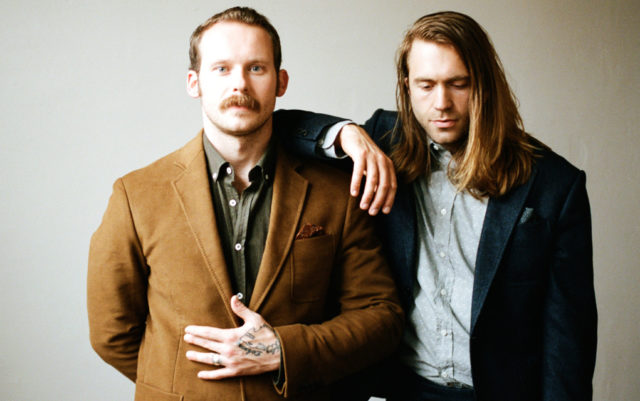 “You can find music to be cathartic if you’re willing to be honest with it,” says Andy Baxter, lyricist and one half of the duo Penny & Sparrow.

And honesty is at the forefront of his new album, Let a Lover Drown You, with guitarist Kyle Jahnke. The relative newcomers have made a name for themselves in the indie folk scene by combining Baxter’s poetic and often candid lyrics with Jahnke’s instrumentalism, solidified in sweeping harmonies.

The band will head to eTown Hall for a live recording on July 14, and joining them on stage is singer/songwriter Sara Watkins, who brings a renewed focus to her lyrics on her latest album Young in All the Wrong Ways. Known for her long career both as part of the iconic bluegrass group Nickel Creek and various other projects, Watkins spent the last year and a half singing mostly cover songs as part of the Watkins Family Hour with brother Sean and other friends. The newest release is her first solo album without covers. It’s comprised entirely of songs she either wrote or co-wrote with friends.

“For some reason I had more to say,” Watkins says about Young in All the Wrong Ways. “My own personal words didn’t really need to come out of me for a long time on the [Watkins Family Hour Tour]. Instead, I was singing other people’s words. Maybe somehow that contributed to me having more to say. Everything affects the next project, that might have something to do with it, who knows.”

In the past, she’s called the album “a breakup record with myself,” and certain songs point to that notion; “Invisible” for one.

“I was just rethinking some things and being willing to start over with myself,” she says. But for Watkins the album is really more about continually taking steps forward, whether the destination is known or not.

When faced with a decision several years ago, neither choice of which felt particularly perfect, Watkins listened to advice from her dad.

“Don’t stall, don’t stop moving,” he told her. This album, she says, is about moving forward towards the unknown instead of staying in the same place paralyzed by uncertainty.

“I decided I didn’t just want to stay where I was. I wanted to get some forward motion going and not camp out in the same valley that I found myself in,” she says. “I think for me and for a lot of people, every five or 10 years or so things will be going great and then you kinda of look around and it’s like, ‘I’m still in this job and I don’t really want to be in this job anymore or I’m still in this relationship and I’m probably just defaulting to it or [I’m] living in a town that doesn’t really resonate with [me] anymore.’”

This same sense of self reflection — the kind that launches a person on a completely new trajectory — was the catalyst for Penny & Sparrow’s start in 2011.

While living in Austin, Baxter found himself intermittently homeless for a time before moving into a crowded, but creative, house with nine other guys including Jahnke. The two shared a room with another friend and often found themselves playing music without any thought to making a living from it.

“We started doing music just as a hobby because we both had jobs that were fairly stressful and to decompress we’d get together, hang out and do music,” Baxter says. He was working for a nonprofit and a gym, while Jahnke was finishing up a Master’s in public health with dreams of working for the Centers for Disease Control. Baxter, although a member of a show choir while simultaneously playing Texas high school football, had never really considered himself a singer.

“I had this insecurity complex growing up that I would listen to the radio or listen to CDs and try and do what other voices could do,” he says. “I finally got over that in the midst of singing with Kyle.”

Jahnke had only recently picked up the guitar after playing drums for years when the two started. It could have all come to an end when Baxter moved into a new apartment after marrying his girlfriend, but as fortune would have it, Jahnke moved into an apartment just down the hall from the newlyweds. Around Christmas 2010, the two decided to record a few songs which eventually became their debut Creature EP.

“We put it out literally on iTunes for the sheer purpose of looking back when we are 40 and saying look at this cool thing we got to do… ‘Hey, kids your old man was decently cool at some point. He has an album,’” Baxter says. But then, “We just sort of kept going.”

In a way, the career found Penny & Sparrow and not the other way around, which allows the duo a certain freedom in their music.

“We didn’t go out searching for it, really trying to make it,” Baxter says. “It really just kind of snowballed in a really beautiful way. Fear was never an engine of creating stuff, it was all out of joy.”

Like Watkins, whose album could have been mistaken at first as pessimistic, the honesty Baxter employed on Penny & Sparrow’s newest release is almost melancholic as he reflects back on broken relationships and lost loves.

“I wanted to experience that emotion all over again,” Baxter says of his lyrics. “In experiencing it this way, the sting of loss is gone a little bit or … or I was reminded that marriage although hard is worth sticking around [for] because that type of love, the type without an escape path is really what I want.”

Despite the album’s cursory, pensive tone however, Baxter says ultimately there’s a lot of joy and hope behind his lyrics.

“We wanted to write honestly, which means your songs are going to contain some melancholy but if you write honestly, also, it’s not all bleak,” Baxter says. “There’s a ton of hope if there’s any reading into the lyrics. Granted that’s easy for me to say because I wrote them.”

Heeding advice from an author friend, the duo combines their melancholy sound with a certain humor in presentation, allowing the audience to breathe a bit, while still able to take in the depth of emotion presented in the music. Plus, the “ridiculous” joking and laughing in between songs at their shows is a large part of the honesty Baxter hopes to express.

“If we weren’t to be joyful on stage or express levity and happiness, it would feel disingenuous because we’re not brooding sadballs all the time,” Baxter says.

Penny & Sparrow’s chemistry on stage is a natural product of a long and close friendship that’s had it’s fair share of disagreements and arguments, which, according to Baxter, has only made their bond stronger.

“Humanity is such a huge ball of insecurity that the second things get hard, it’s like we’re allergic to difficult conversation,” he says. “We disengage with friendship, we disengage with romantic relationship and all the while we should have expected that shit all along. … The fact that an argument comes should not be shocking at all. What should be shocking is our aversion to dealing with it and seeing it through to the other side.”

Both Watkins and Baxter are hesitant to share too much of the personal stories that inspired the new albums. As Watkins explains, she doesn’t want to take away from the listener’s ability to resonate with the lyrics, to make each song their own.

“I don’t want them to have to listen to my life,” she says. “I want them to hear their own life in the album. Ideally it’s relatable.”

For both Watkins and Penny & Sparrow, this feat has been achieved on their newest albums. The music is cathartic, honest, relatable and whatever else it makes you feel.