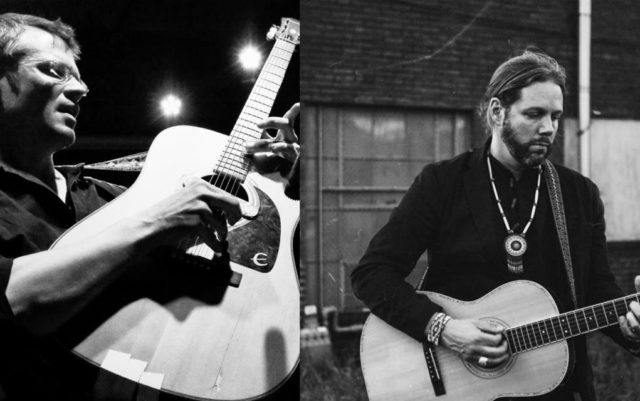 It’d be a mistake to regard Luther Dickinson’s Blues & Ballads — A Folksinger’s Songbook: Volumes I & II as a career retrospective, even if, at 43, the Mississippi-bred guitarist has enough music in his head to make one, and even if he’s sliding into middle age and mid-career, usually an opportune time to take stock. The songbook tradition is a vivid one for Dickinson and his family — simple books of artwork accompanying lyrics and transcriptions of traditional music — and Dickinson is a guy, despite his success as the firebrand slide guitarist for the North Mississippi Allstars and for a time a Black Crowe, who has made celebrating and interpreting his own musical DNA his life’s mission.

The songbook itself — available only with the vinyl edition of the 21-song album of the same name — was the goal of the project, he told Boulder Weekly recently.

“The inspiration for the project was the concept of the songbook, and when it came to the music, re-recording some of my favorite songs in a manner befitting a folk song,” Dickinson explains. “But, there were also a lot of new songs I wanted to record as well. I had a friend transcribe the tunes, another friend of mine did the artwork for it; really came out beautiful.

“But the recording of the album was really casual,” he says. “I was in Chicago, so I got to record with Mavis [Staples], which was wonderful. When I was in Nashville, I’d go with my Nashville and Mississippi friends. We’d just record in groups. There’s a funny kind of luck in record production, where the more honest and casual your recordings are, the more people like it.”

All the tunes across the 21-cut programs bear Dickinson’s writing credit; a few are collaborations, such as the lovely ballad “And It Hurts” (with a Jim Lauderdale co-writing credit), gently laced by Lillie Mae Rische’s weeping fiddle, a few credited with his dad, legendary producer and musician Jim Dickinson, and the bouncing hill country shuffle “Hurry Up Sunrise”, co-written with the late Otha Turner and sheened up by flashes of Dickinson’s elegantly serpentine electric slide.

So the thing is not really a greatest hits package and the songs themselves are mostly Dickinson’s, so it’s neither a collection of traditional songs as such.

But it’s a window into how Dickinson, by way of song choice and shirtsleeve recording sessions, hears himself and hears his own influences. And tucked in there are bits of his long association with the likes of Otha Turner and R.L. Burnside, ambassadors of the hill country blues Dickinson absorbed wholly and unreservedly growing up in northern Mississippi.

The tune “My Leavin’” reads, at least initially, like a tribute to his father’s death in 2009 after bypass surgery. The line “Don’t let my leavin’/grieve you” sticks with the listener like a psalm of serenity.

“It’s funny that you pick that one out,” Dickinson says. “That line was actually from an R.L. Burnside song, ‘Long Haired Doney,’ and I learned that line when I was on tour with R.L. back in ’97. I always thought it was a nice line, kind of old-fashioned.

“All my songs come from conversations I remember, or other songs I heard. It’s just a southern oral tradition … But it’s just like what Dylan does: take a line and write a melody to it.”

Like “Ain’t No Grave,” his re-record of the tribute piece he did write for his dad, initially recorded with North Mississippi Allstars, recorded more sparingly here with the transcendent Mavis Staples sharing vocals.

“Yeah,” Dickinson says. “There are a handful of old-time gospel songs that use that verse, use that line. You hear that, and it’s all about the connotation. It could be, you know, the song that someone got engaged to, or the song that your mother got married to. Whatever! The language bears weight.”

Economy of language, indentifying the specific gravity of words and their placement in a song — these are qualities we’re tempted to believe are innate, but Dickinson knows better. Songwriting is both a primitive and fiendishly complex process (well, good songwriting is…), and he admits that despite his richly musical upbringing, developing the skills to play in that space took some guidance from his old man.

“It’s easy to get hung up on what you think the song’s really about. But now, it’s all second nature or part of my process. And it feels like we’re still collaborating.”

Now the father of two daughters, Dickinson finds himself drawn to thoughts of fatherhood, what it means to be a role model, what someone sees of themselves, or their own parents, in their children’s eyes and aspirations and instincts.