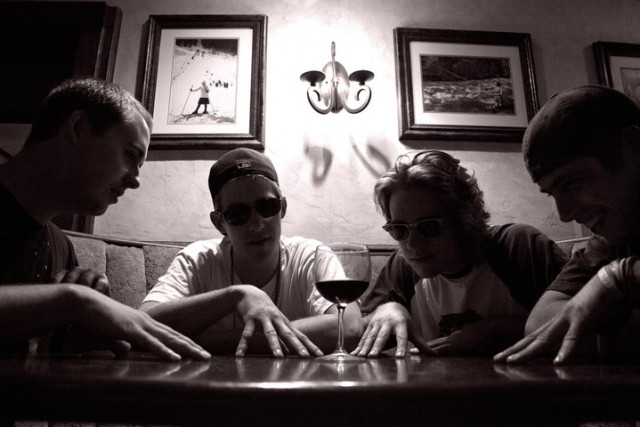 After four-and-a-half years, Springdale Quartet is ready to move on to bigger and better things. As bassist Jordan Roos explains, that means everything from the venues they play to the music they make.

The local jazz/funk/blues four-piece has thus far enjoyed a nice run of success. They’ve played alongside Maceo Parker, Karl Denson’s Tiny Universe, the Benevento/Russo Duo and Tea Leaf Green. They also just finished a run of two shows at Telluride Jazz Celebration, and that comes on the heels of an appearance at the famed 10,000 Lights Festival in Minnesota. Suffice to say, it’s been a good run for Roos, Chase Terzian, Ben Waligoske and Greg Russell.

Yet at this point, the band’s ready to move on.

After years of playing anywhere and everywhere, they’ve thrown that touring philosophy out the window.

They’re focused on new tunes not found on their brand new album, Noisefactory. In short, they’re ready to take things to the next level.

“We have a lot of special shows and bigger shows coming now, so we’re trying to weed out some of the smaller ones,” Roos says. “Until now, we’ve had the mentality that doing shows every weekend was great for us as a developing band. Now that we’re more settled, we’re picking our gigs wisely, and I think that’s going a long way with the perception. If you see a band playing every week in a small bar, it starts to build on how people may perceive that band. You want to spread things out and make them special.”

The band has a wide range of favorite experiences to date, given their ability to play several large stages — from the Snowball Music Festival to playing Telluride. In addition, the band’s gotten to meet The Flaming Lips, who Roos says are all nice guys.

“It’s nice to see people like that as normal people,” Roos says. “It can be surreal when you see people back behind the curtain.”

Yet Roos says the band’s favorite persons to play alongside to date have been The New Mastersounds, a funk quartet from Leeds that has been around since ’99.

“Playing with the New Mastersounds has been an incredible experience,” Roos says. “We’ve done a small run with them, and those guys are just the nicest guys. If there’s one thing that directly influences the experience for us, it’s how these guys are off-stage. You play with some guys, and they have big heads or they might not be the funnest people to be around, and it takes from the experience. Playing with the New Mastersounds is just a great time.”

Even though Noisefactory is a new release, the band’s already focusing beyond it, since the album is largely material they’ve already been playing for years. Instead of serving as a proper release of songs to promote, it’s more about giving these songs an official home on a release, since they’ve been a part of the band’s live identity for so long.

“We really have an opportunity now to look forward now that we’ve put Noisefactory out there,” Roos says. “We’ve got a lot of new material that we’re working on, and we’re very excited about writing some new songs as well. The mentality isn’t about hitting the reset button, but we do want to take a fresh breath as we move forward — learning fun new covers along with the new songs. That’s how it stays fresh for us.”

Springdale Quartet plays this Friday, Aug. 26, at Conor O’Neill’s, which has been a kind venue to them over the years. Thus, this weekend offers a prime place to have some fun and see them in their element.

“Playing a place like Conor’s has been one of our favorite places to play in Boulder,” Roos says. “There’s something about the room in there, and people like to have fun. When you play a place like that, you have three hours or more to play. You stretch things out, experiment a bit more, and we try to bring guests up.

“There’s such a great musical community in Boulder that it’s fun to play with friends like the guys in Jet Edison,” he continues. “We just like to get people dancing. That’s the No. 1 priority for all of us on stage. When we see people having fun, we’re having fun. It’s a direct relationship between the band and the crowd.”