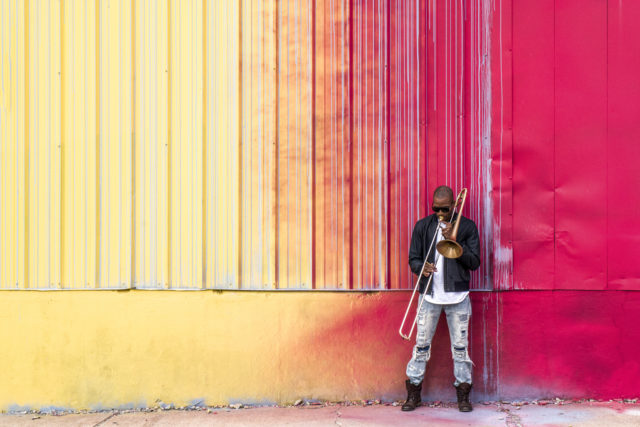 Troy Andrews was handed a trombone at the age of 4, and he’s never looked back.

“I think at that time that was one of the only other instruments that wasn’t occupied and that actually worked in the house,” he says. “I didn’t really know what I was doing, but I was able to get some type of note out.”

Raised in a musical family in the heart of New Orleans, his older brother James already played the trumpet, which made the smaller instrument off limits for Andrews. The long brass instrument was twice as big as he was, earning him the neighborhood nickname “Trombone Shorty,” a moniker he performs under to this day.

For the past decade or so, he’s played as Trombone Shorty and Orleans Avenue, releasing four albums, the first of which, 2010’s Backatown, earned a Grammy nomination for best contemporary jazz album. Although he doesn’t necessarily consider himself a jazz musician — his self-proclaimed “supafunkrock” genre is a fusion of jazz, hip-hop, funk and rock, a sort of musical gumbo, he says.

“I just look at the people that came before me and try to take from what they created and put my own stamp on it and have my own identity,” he says. “We’re all playing in the tradition without trying to play the traditional music. But we’re keeping that tradition alive.”

When he first started playing the trombone his arms were too short to reach all the positions. Andrew’s mother used to stand next to him while he played, watching his head tilt to one side, afraid he would fall over any minute. But Andrews also quickly learned the piano, bass guitar and drums. He played the trumpet and other brass instruments, too, as his entire family would gather to jam on a regular basis.

“It was just like a music store for me at home. I would just crawl from the tuba to anything,” he says. “That was my playground.”

Andrews chronicles his early years and the culture of New Orleans in two children’s books, Trombone Shorty and The 5 O’Clock Band, the first of which was named a Caldecott Honor Book in 2016.

Andrews grew up in Tremé, one of the oldest neighborhoods in the city known for second line parades, big brass band marches down the street any day of the week. As a 7-year-old, he started his own neighborhood band with cousins and friends all joining in.

“I wasn’t able to speak to them musically because we were so young, but I was able to teach them the notes to play,” he says. The kids all played music by ear at the time, drawing the attention of older neighborhood musicians who would teach them in between tours, Andrews says.

They called themselves the 5 O’Clock Band, the time when school was over, homework was done and they could all grab their instruments and march the streets.

“We just were imitating what we saw in the neighborhood and being a part of it,” Andrews says. “I have a whole lot of education that you can’t pay for.”

It wasn’t until age 10 that Andrews began formal lessons and learning music theory. He attended high school at the acclaimed New Orleans Center for Creative Arts before being recruited to play with Lenny Kravitz after graduation. He’s gone on to play and tour with varied artists from the Rebirth Brass Band and Dr. John to Red Hot Chili Peppers and Foo Fighters to country stars Zac Brown and Dierks Bentley. All of that experience has created a sound rooted in the rich tradition of New Orleans, but made wholly his own.

“When you play with different people, you start to pick up their rhythms,” he says. “It’s just like if you moved to a different city, there’s something from that city that you’re going to pick up, certain words that they use, certain slang. That’s the same way with me and music.”

New Orleans has changed a lot in the last decade or so, and Andrews isn’t sure it’s possible for kids nowadays to have the same rich musical experience he had as a child. Still, he hopes the next generation can “move it forward,” just like he has done. Through his Trombone Shorty Foundation, Andrews helps provide music lessons for teenagers from all over New Orleans every Monday night. The program includes management, producing and recording — all sides of the music business in an effort to give the kids the best chance at success, to show them the possibilities are endless.

It’s not uncommon when Andrews is home (which he rarely is given his touring schedule) to gather 75-100 musicians to celebrate and march in the streets, just like he’s done his whole life.

“It was never in my mind that I would be where I am today,” he says. “I didn’t even know if it was possible. I just wanted to play.”