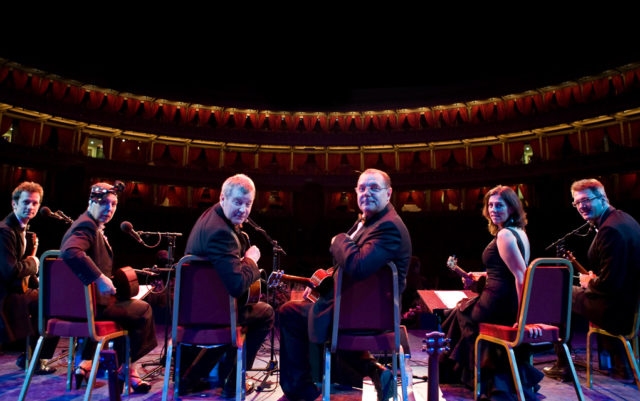 Sure enough, it’s all part of the eclectic mix of holiday music on the Boulder classical scene, featuring not only the Ukulele Orchestra of Great Britain, but also Elphaba from the Broadway hit Wicked, alongside other events that have become part of the annual December concert schedule. The perennial best-sellers — the Nutcrackers and the CU Holiday Festival — are already behind us, but there is still plenty of music to look forward to.

The Ukulele Orchestra of Great Britain (UOGB) will be at Macky Auditorium Thursday (7:30 p.m. Dec. 8) as part of the CU Presents series. Known for their iconoclastic, not to say wacky, programming, the group promises to perform their usual combination of rock and pop covers, including music from Joni Mitchell and Pharrell Williams, some jazz and country songs, and classic Christmas carols.

The group’s origin is almost mythological. When he was child, founder George Hinchcliffe w sas given the choice of a model train or a ukulele. Unexpectedly, he chose the uke, and eventually banded together with other aficionados to form the eight-member singing and strumming “orchestra.”

Playing instruments known more for their association with Tiny Tim and Hawaiian ballads than whatever you might consider “serious music,” the UOGB has become popular embracing the ukulele’s light-hearted image. They mug gleefully in their publicity photos — no glamour shots for them — and even invite Boulderites to bring their own ukuleles to the concert for a sing-along, play-along session during the concert.

Sheet music for this portion of the program can be found by visiting the CU Presents Web page at www.cupresents.org/events/ukulele-orchestra-great-britain-0 and you can find tickets to the UOGB show by calling the Macky box office at 303-492-8008.

The Wicked Witch of the West sneaks into the Christmas schedule with the Boulder Philharmonic Orchestra, who are presenting A Wicked Good Christmas Saturday in Macky (7:30 p.m. Dec. 10). Scott O’Neil will conduct the performance, which will feature vocalist Dee Roscioli, who played the role of Elphaba in the Broadway and national touring productions of Wicked, and the Fairview High School Festival Choir.

Roscioli made her Broadway debut as Elphaba in 2009, after playing the role in Chicago and San Francisco. While that is her most famous role, she has been active in musical theater for many years. Her other credits include Mrs. Lovett in Sweeney Todd, Andrew Lloyd Webber’s Cats, her own cabaret show Decidedly Dee at the jazz club Birdland, and most recently the 2015 Broadway revival of Fiddler on the Roof.

O’Neil was resident conductor of the Colorado Symphony from 2005 through 2015, and can currently be heard discussing the relevance and meaning of classical music on Colorado Public Radio.

The program will include music from Wicked, and more seasonally, Frozen. The Christmas selections will range from the sacred “O Holy Night” to the secular “Santa Claus is Coming to Town” and “Baby, It’s Cold Outside.”

Tickets are available by calling 303-449-1343, or at the Boulder Phil Web page, boulderphil.org/concerts/2016-17-season-overview/a-wicked-good-christmas.

Other holiday events in Boulder and the surrounding communities include:

Under the direction of Vicki Burrichter, the 200-voice Boulder Chorale and the Boulder Chorale Children’s Chorus celebrate the holiday season with songs honoring things to be grateful for this time of year. The program includes traditional carols and music from Annie Lennox.

The Seicento Baroque Ensemble will perform music by the Renaissance composer Michael Praetorius, best known for Es ist ein Ros entsprungen (Lo, How a Rose E’er Blooming), and his contemporaries. Seicento and conductor Evanne Browne will be joined by the early brass instruments of the Dark Horse Consort.

Longmont Symphony Orchestra will present its annual holiday concert with conductor David Rutherford, who is widely known to Colorado audiences as a string bassist and an-air personality with Colorado Public Radio.