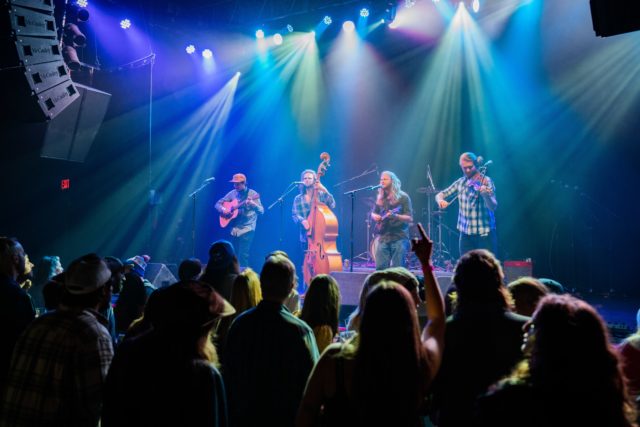 Jamgrass is often associated with the state of Colorado, which has given birth to many of the genre’s well-acclaimed groups, including Leftover Salmon, the String Cheese Incident and Yonder Mountain String Band. As time marches on, the tradition of pushing the boundaries of bluegrass continues with younger players happily joining the party and adding fresh spins to the sound. One of the latest groups to gather momentum in the Centennial State is High Country Hustle, a quartet out of the Durango area that won the WinterWonderGrass band competition in 2020 and is rapidly ascending the peaks of acoustic twang while pleasing its listeners. Boulder Weekly had the pleasure of chatting with the band’s guitarist and vocalist, Andy Gallen, who also works as a graphic designer when he’s not playing a high and lonesome tune.

This interview has been edited for length and clarity.

Boulder Weekly: What’s the history of the band’s name?

Andy Gallen: Choosing a band name is always hard, but I had a huge list of names that we were considering. High Country Hustle just happened to be one of them. We play fast bluegrass from the high country.

BW: You and your bandmates all recently graduated from Fort Lewis College?

AG: Yeah, we all went to Fort Lewis and that’s where we met. Three of us are (from Colorado), but our mandolin player, Seth Yokel, is from South Carolina. Our fiddle player, Dennon Jones, is from Nederland. Our bass player, Charlie Henry, is from Littleton, and I grew up in Telluride.

BW: I’m guessing you took in a few bluegrass festivals living down in Telluride?

AG: Definitely. I’ve been to like 20-plus. I haven’t missed one in 16 years. I hit my first Telluride Bluegrass Festival sometime in the early ’90s when I was a little kid.

BW: What did you major in at Fort Lewis College?

BW: You all recently released an album called Weather the Storm. Did the title have anything to do with the pandemic and all that went along with it?

AG: It kind of ended up being that way, but that wasn’t necessarily what I was thinking at its inception. I wrote the song that’s the title track before the pandemic. And then it kind of took on new meaning from everything that happened during the pandemic.

BW: How’d you guys come to know Jake Simpson from the Lil Smokies? I saw that he produced your album.

AG: Our fiddle player had taken some lessons from Jake in the past and we were lucky enough to have him jump on board as a producer on the album. He really helped take it to another level. We recorded some of the songs on the album in Fort Collins at Swing Fingers Studio and then we finished it up down in Durango.

BW: Will you get back to the Front Range soon?

AG: Yeah, we play most of our gigs up on the Front Range unless we’re going out of state, but we like playing down in the Durango area too. It’s a lot of driving to get to gigs, but we like living down in the Four Corners area. It’s nice to be down in Southwest Colorado. We’ve talked about moving up closer to the Denver area, but for now we’re enjoying living down here and bringing the music up there. We like to camp and get out on the river when we can. We like the outdoors a lot. So far it’s been a good run. We just turned five this year. We made it through the pandemic, raised a bunch of money on Kickstarter for our latest album and had a great summer. We’re chugging away. It’s been great. We’ll be back up on the Front Range in a few months.