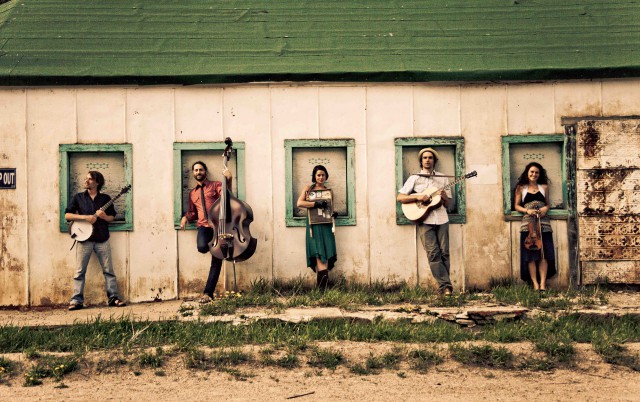 Right up there with Leftover Salmon and Big Head Todd, Elephant Revival is one of those handful of Boulder bands iconic to the city, but also widely known beyond the People’s Republic. But that status also comes with the price of not being able to play its hometown very often.

“It becomes rarer and rarer as the crowds get larger and larger,” says Bridget Law, the band’s fiddle player.

The band hasn’t played here since its September 2013 free album release performance at the Central Park Bandshell, a performance that drew nearly 1,200 audience members and moved enough albums to catapult the band onto the Billboard charts.

But for local music-starved elephantine disciples, that rarity is this weekend, when Elephant Revival will do a two-night stand at the Boulder Theater on Friday, Nov. 7 and Saturday, Nov. 8, with special guest sets from Horse Feathers on Friday night, and fellow local heroes Paper Bird on Saturday.

In addition to the music, there will be acrobatic dancing from members of Fractal Tribe, and the band is encouraging attendees to dress in feathers because both nights will be filmed.

“We’re hoping to be able to release this as an ondemand or live DVD package,” says Law. “The live music is such a part of us. It’s exciting, capturing this night as a time capsule. It’s so beautiful. The energy in that room is amazing. I think it’s time for a live release.”

That sort of bombast might seem unusual for a band like Elephant Revival, whose particular brand of folk sits between gentle and delicate, and for the band to be stepping up to bigger and big ger stages, away from the natural ambiance of the instruments their sound is based on, but Law says a big part of that sound’s appeal is the ability to be dynamic, to jump from 60 to 110 decibels if need be, and that with the sort of subtle nuance found in Elephant Revival’s songs, you kind of have to play loud in order to play soft.

“You’re amplified so you have a spectrum and that makes those subtleties more available,” says Law. “Our vocals are so quiet. Being on a street-corner, you really miss out on a lot of the sound.”

As for the stage dancers…

Once, while en route to the High Sierra Music Festival, Elephant Revival pulled over to the side of the road to pick up a hitchhiking stiltwalker, who turned out to be a member of March Fourth Marching Band also going to High Sierra.

“We were like, I don’t know if you can fit,” says Dango Rose, Elephant Revival’s bassist.

But sometimes those quirky people they’re drawn to are elsewhere. Though Elephant Revival claims Nederland as its home, its members are a little less confined with members now scattered across the plains, reuniting for recording and tours.

“I think it helps us write more,” says Rose. “We all come in fresh with new material and build that personal autonomy. On the road, where does one person begin, where does the other end? Most people live autonomous lives. People in bands, it gets a bit convoluted at times.”

“Now when we come together, the potency of our time together is stronger because we have more space when we’re apart,” she says. “It’s a balance we’ve been seeking to achieve. Having the flexibility to live elsewhere is something we like a lot. We’re about to start another wave of music and I think you’ll feel it in the music, there will be more of an out and in breath.”

The band scheduled a fourday rehearsal to work on new material while on break from tour in Los Angeles, and says that, armed with some of that new electricity, it finds itself facing slightly diverging sonic paths best summarized as Colorado and Nashville.

“I don’t think we’re intentionally part of the neo-acoustic revival,” says Law. “When it started, we just liked to be outside, to go camping and go to festivals. So I think naturally we were more drawn to the acoustic instruments because of their portability.”

“It’s a choice of where we want to go,” says Law. “We could go this Americana route. My choice would be to dive into this indefinable genre we’re exploring.”

Law for her part says she likes the idea of partially ditching albums and recording one-off singles with different producers to try lots of different sounds.

But no matter what the band does, Law and Rose say it will maintain the core of what fans expect.

“It’ll be soothing,” Rose says. “Bring your grandchildren. Bring your mom. It’s open to everyone.”