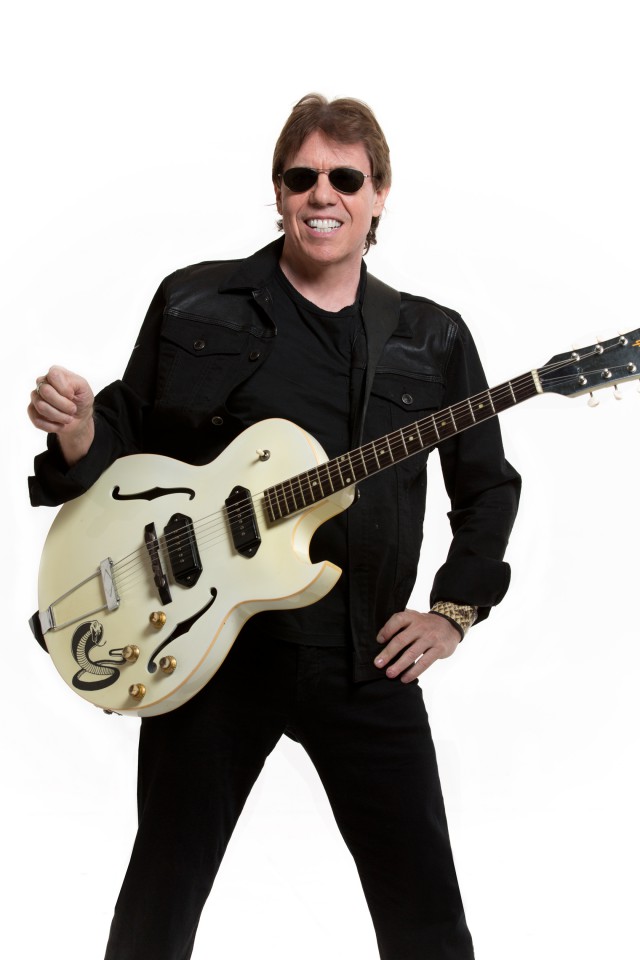 The Beatles did what they do, Dylan did what he does, and the rest of us had to play the blues,” George Thorogood says of the barreling Chicago-style electric blues he has specialized in for 40 years now.

But back when he first started playing in the early ’70s, Thorogood wasn’t really sure rock would even be around this long, let alone any contributions he might make to the genre.

“It wasn’t just me,” he says. “At that time everyone thought rock might die. The Beatles broke up, Jimi Hendrix just died, Janis Joplin just died.”

And who was left? James Taylor and Joni Mitchell, whom Thorogood respects, but says are definitely not rock. Even the mighty Led Zeppelin was going soft back then.

“‘Stairway to Heaven’ was a gentle song,” he says.

The music world was shifting toward soft rock, and Thorogood just wanted to be a part of heavy or hard music before it went away. So Thorogood, who at the time was a semi-professional baseball player in the now-defunct Roberto Clemente league, picked up the guitar, cranked his amp and went to town.

But when he did, it wasn’t just his being neither Lennon nor Dylan that pushed Thorogood toward the blues.

“Life is tough,” says Thorogood. “How many times does your team win the world series? Overall, blues is something everyone can relate to in some way.”

In the early days, George Thorogood and the Destroyers (most of whom were other players on Thorogood’s team) only performed when baseball wasn’t in season. But in those down months, he and his bandmates channeled that universality toward writing songs with staying power. Iconic hits like “Bad to the Bone,” weren’t just written to reach a broad audience; Thorogood says they were written to “last forever.”

“Here I am 40 years later, so I must be doing something right,” he says.

And Thorogood says that playing to a different audience every night keeps those songs from getting stale for the band as well.

“We never get tired of them,” he says.

And the biggest proof he isn’t just blowing smoke out of those so-bad bones of his is that Thorogood and company are still touring.

“It’s probably up there with making love and drugs as the most powerful force on the planet,” he says of the stage experience.

And while many consider rock something that peaked in the ’60s, not in your 60s, Thorogood thinks it’s a far better experience now than in the old days.

“Everything is a lot easier to do,” he says. “The stage is better. Technology is better. The hotels are better. … Now audiences don’t have to sit there for 45 minutes because Eric Clapton’s amp blew up. Now they’ll make a better amplifier.”

Also better in Thorogood’s mind is Thorogood himself, and his band as well. Though his string of hits is mostly from the ’70s and ’80s, Thorogood never stopped recording.

His most recent album, 2120 South Michigan Ave., was released in 2011, and features 13 tunes in his signature style, perfectly combining a raw and rowdy sound with polished, near-perfect songwriting chops.

One thing listeners might notice about 2120 South Michigan Ave. is that while many artists tend to play everything at lightning speed when they’re young and then downshift into ballads as they age, Thorogood has taken the opposite tack, with his early tunes paced as strutters and many songs on 2120 South Michigan Ave. flying by at breakneck speeds. Covers of “Seventh Son” by Johnny Rivers and “Let it Rock” by Chuck Berry blast by like early punk tunes, and “Mama Talk to Your Daughter” goes even faster.

“I’ve always had a reputation for playing things a little too fast,” he says. “You get out in front of an audience, you’re revved up. You’re rocking, man.”

To say that Thorogood isn’t slowing down as he ages is not a metaphor.

Which leads to an obvious question: How many bourbons, scotches and beers does it take for rock and roll to pass out?

“It was just the title of the song,” he says and laughs. “The smell of scotch actually makes me puke.”