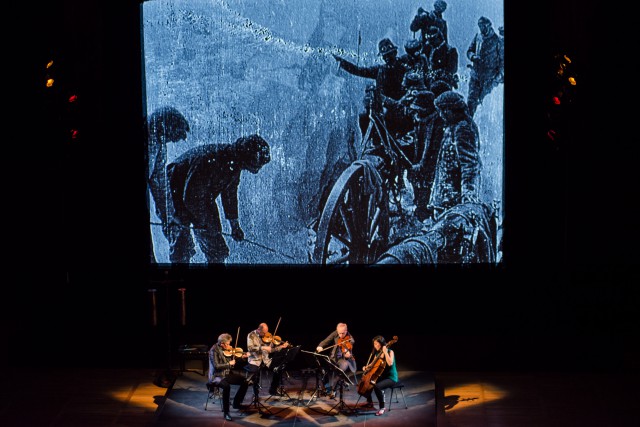 The Kronos Quartet, always bold, brings Boulder artists to Boulder for their appearance at Macky Auditorium at 7:30 p.m. Wednesday, Oct. 8.

The concert will feature the world premiere of Speak, Time by Yuri Boguinia, who grew up in Boulder; and an appearance by broadcaster and writer David Barsamian, who founded Boulder’s Alternative Radio in 1986.

Barsamian will speak while Kronos performs songs from the early years of the 20th century. That performance will lead to the major work of the program, filling the second half of the concert: Beyond Zero: 1914–1918, a new multimedia work for string quartet and film that Kronos commissioned for the centennial of the outbreak of World War I.

Beyond Zero was written by Serbian composer Aleksandra Vrebalov and will be performed with film restored by experimental filmmaker Bill Morrison from extremely rare and badly deteriorated original films of the war.

David Harrington, Kronos’ first violinist and guiding spirit, said the quartet wanted to remind audiences of the impact of the First World War.

“The world that we live in is incredibly affected by things that occurred a long time ago,” he says. “For me personally, and I think for a lot of Americans, that war is something that we don’t know as much about as we know about other wars, so I thought it would be a good idea for Kronos to explore that time.”

Vrebalov, a composer Kronos has worked with before, was the quartet’s choice for Beyond Zero because she has survived a war — she was writing her first commission for Kronos in Belgrade while the city was under NATO bombardment in 1999 — and she is from Serbia, where the 1914 assassination of the Austrian Archduke started the world’s slide into war. And she writes in an intense style that seems well suited to the subject.

“Her direct knowledge [of war] pointed me in the direction of her work,” Harrington says. “This piece got bigger and bigger and eventually it became clear that the piece wanted a film. And we thought who better then Bill Morrison to take us back 100 years to the world of video and film” during the war.

The deterioration of the original film is visible in the projected images, creating both a historical distance and an emotional impact when it is seen.

After the score was completed, Kronos made a recording so Morrison could fit the film to the music. Kronos performs Beyond Zero with a click track, allowing them to synchronize with the film.

Barsamian, who is known for his extensive interviews with Noam Chomsky and other progressive figures for Alternative Radio, has worked with Kronos before.

“I realized that one of my favorite persons that we’ve ever worked with lives in Boulder,” Harrington says. “I thought to myself, ‘We’ve got to have David. Why don’t we take some of the music that we play from right around Word War I and see if David would be interested in speaking over that music?’ So, we’re going to make a bed of music” for his words.

Barsamian says he will be “talking about the multiple crises in the Middle East, and some historical issues that still resonate today,” while Kronos plays songs from Greece, Turkey and Armenia, sometimes with early recordings. Barsamian will draw on his own personal history as the son of survivors of the Armenian Genocide, one of the great tragedies of the First World War.

Harrington and Kronos first met Boguinia when, as a young composer, he sent them a fan letter. The son of a Russian mother who moved to Boulder in 2000, Boguinia studied with University of Colorado composition professor Daniel Kellogg before attending Juilliard. He is currently a doctoral student at Princeton.

“It was one of those letters that you don’t get very often,” Harrington says. “It was incredibly wonderful and passionate and so interested in music and its effect, so I called him up. This is a young composer who is amazingly talented.”

Kronos will open the concert with a lighter piece by Montreal-based composer Nicole Lizée, Death to Kosmische. If you don’t know — and Harrington didn’t — kosmische refers to a 1960s German form of pop/rock/electronic music.

“Nicole has an amazing sonic palette and a great sense of humor,” Harrington says. “This concert starts with celebrating fun, sonic fun, and then it goes into other areas of life as well.”