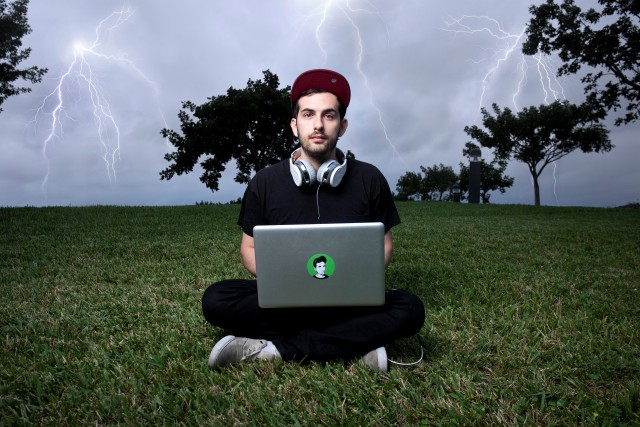 Now he’s at the top of his game, ready to return to Colorado for headlining shows in Fort Collins and Denver after taking over the Fox last December.

Borger’s latest, Flex EP, has built plenty of momentum. The strippers might have helped. More on that later.

Borger is naturally unfazed that the video for “Flex (Borgore’s Dubstep Remix)” has more negative votes on YouTube than positive. He referred to the song as “next-level offensive,” and the video features him with an entourage of strippers dancing around a tricked-out station wagon.

“If you see the number of likes and dislikes on this video, it’s humongous,” he says. “There’s big numbers on both sides.”

The video has collected more than one million views total since its Jan. 27 release, with more than 20,000 votes for or against it.

“So people are talking about it, y’know? If it was shit — if it was proper shit, if it wasn’t a good tune — people would just ignore it,” Borger says.

“Even when a big artist is releasing a tune that no one cares about, no one talks about it, for good or worse.”

Furthermore, Borger says the dislikes are mostly his fans who feel cheated that the absurdly misogynistic lyrics of “Flex” are auto-tuned for the remix and mostly incomprehensible. “They’re like ‘Yo, we were expecting offensive lyrics, and we could not understand what you are saying,’” Borger says with a laugh.

“Flex, along with most of my work, is just fun, y’know?” he continues. “It’s just a joke. The songs make me laugh and I went all the way with it. Some people think we’re serious, and they like us for being serious. That’s funny stuff, too.”

On the other hand, the response is solidly positive for Borger’s favorite track from Flex: “Kiss My Lips,” a less chauvinistic (but equally shallow) track featuring electro-pop vocalist Dev (best known for her part in Far East Movement’s ubiquitous hit “Like A G6”).

“Kiss My Lips” sounds like what the controversial “Britney Spears dubstep” track should have sounded like. Therefore, it’s no surprise that BBC radio has given it mainstream rotation and Rolling Stone supported the video on its site.

Coming from a producer who is known to be among the “filthiest,” it’s mounting evidence that pop is becoming inseparable from dubstep.

The real question is not “who” ruined dubstep, but what. The answer: pop music. It “ruins” everything, right?

Pop is increasingly swallowing EDM. It has already become the core of dubstep’s genius commercial appeal, where female-friendly “builds,” driven by vocals and clean-cut synths, counterbalance the aggressive bass “drops” that give dubstep its phallocentric image. “Kiss My Lips” is this formula in action.

Amidst all of the EDM bastardization, attitude is the only thing clearly separating DJs — and Borger crafted his from the start.

“I always said, and always believed in it 100 percent, that you must have a character,” he says.

Most of his fans, anyway, understand that the rude, confrontational, absurd quality of “gorestep” is not true to life. The Borgore persona is a joke, and Borger is strongly defensive about how he carries himself in person.

The strippers on stage? Not a joke. “Lasers are cool … but I’m going back to basics. Lasers, oh lasers! Whatever,” Borger says “Strippers … now we’re talking.”

Skrillex could not pull off having strippers on stage, Grammy win or not. He would never hear the end of it. But Borgore makes it work — similar music, different attitude.

“I’m working on the next-level Borgore show,” he says. “It’s gonna be whatever you’re about to see on a different scale. It’s gonna be pretty much [like] going to a show in Las Vegas.”