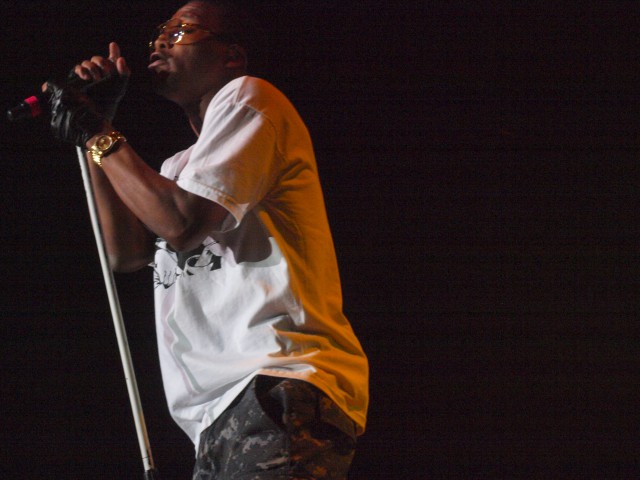 The Laser Tour Denver show sold out about three weeks ago. With a tour that features B.o.B. who has the No. 1 hit in the country with “Nothin’ On You,” and headliner Lupe Fiasco who has two superb albums under his belt, the question comes to mind, who really sold out this show? Regardless if you came to see either B.o.B. (aka Bobby Ray) or Lupe, you were in for a surprisingly magnificent and energetic live show from both.

Nineteen-year-old rapper Dosage out of Philadelphia opened the evening at Denver’s Ogden Theater on Thursday, April 29, with his brand of hip-hop. Unfortunately, we missed his set and arrived midway through B.o.B.’s set. Bobby Ray was backed by a band and was effortlessly singing, rapping, and plucking away on his acoustic guitar. He’s a natural performer weaving in and out of songs from his debut album, The Adventures of Bobby Ray, like “Don’t Let Me Fall,” and “Lovelier Than You” to his mixtape classics like “I’ll Be in the Sky,” and “Generation Lost.” How was Lupe going to be able to follow this? Like any up and coming rap superstar, Bobby Ray ended his set with his hit “Nothin’ On You” and a hype jam session with his band. Those that thought B.o.B. was just his hit song had their eyes opened wide.

Lupe Fiasco took the stage after a short intermission with his own band along with a band member behind a couple of laptops running what looked the electronic portion of the show. He commanded the stage from the outset running through fans favorites like “Hip-Hop Saved My Life,” “Kick, Push,” and “Superstar.” Although Lupe’s new album, Lasers, isn’t due out until later this year, he was happy to share a plethora of new tracks including his new single, “I’m Beamin’,” for which the video just hit the interwebs this week. He kept it light throughout the entire set, performing more of the crowd-friendly tracks as opposed to deep-thinking songs like “Dumb It Down” or “American Terrorist.” But for those who wondered if a lyricist like Lupe could truly rock a show, he definitely proved he could.