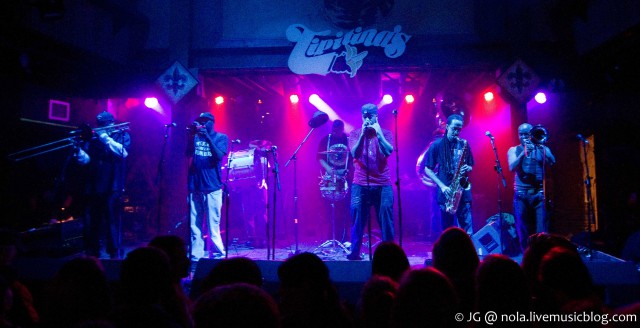 Proving the old adage that patience pays off, the Frazier brothers — Keith and Phil — are finally breaking through into the national scene after plying their trade for 28 years. With their heavy, funky brand of New Orleans brass, the Rebirth Brass Band are now playing theaters and finding more commercial and critical attention than ever with the emergence of David Simon’s latest HBO series, Treme.

The origin of Rebirth Brass Band hearkens all the way back to 1983, when Phil, Keith and Kermit Ruffins, who co-produced the band’s latest album Rebirth of New Orleans, came together for the first time to play local gigs, indoor and outdoor, around New Orleans. Fourteen albums later, the Frazier brothers have played on four continents and are just now finding their greatest momentum.

“After the HBO series Treme came out, it generated a lot of interest in New Orleans culture and music,” says Keith Frazier. “As a result of that, we’ve seen a larger number of people coming out to the shows and stuff, because they want to find out what this brass music is all about. Because it generates interest, club owners see us and say, ‘I want to get you guys to our festival or our club.’ So we’re playing larger things right now. It’s been great for the band.”

Frazier also says the exposure has been educational for folks who might not understand just what a brass band is all about. While the cast of players might rotate over the years, the exact set-up has never diverged from the original. As Keith describes the same structure night after night, he becomes animated describing the “trombones on the outside” or the “highs in the middle.” It’s a passion for him to stay connected to his musical and regional roots, both of which run deep.

For those unfamiliar, a brass band is rooted in the history of a marching band. The rigid line, the anchor of the bass drum and tuba, the two instruments of choice for Keith and Phil respectively, and the use of instrumental solos all take their queues from the style. It only takes one quick tune for the listener to realize this is different than a New Orleans jazz band, and that the facets of New Orleans musical heritage are more varied than you might believe.

Yet as the genre becomes more commercially understood and appreciated, Keith says their new album is focused on establishing their own name and not just a genre.

The timing for a new recording is pitch perfect with the opportunity afforded by Simon. Keith said the band was both excited and a bit nervous when confronted with the possibility of working with the talented writer/director, but getting over any kind of stage fright was worth it to help the city they love and a genre they inhabit.

“When David Simon first had the idea for Treme, he mentioned to my brother Philip that he was doing something based around musicians in New Orleans, and that he wanted us to be a part of it,” says Keith. “We didn’t know exactly what he wanted us to do, but we knew what his work consisted of after watching The Wire and The Corner.

“We got together when he called us and in the beginning they just wanted the music. But then he said he wanted us to be musicians in the series and read lines and that kind of stuff,” he continues. “We were like, ‘Sure thing. Whatever it takes to get the Rebirth name out there and be involved and let people know that New Orleans is on its way back.’” Respond:letters@boulderweekly.com