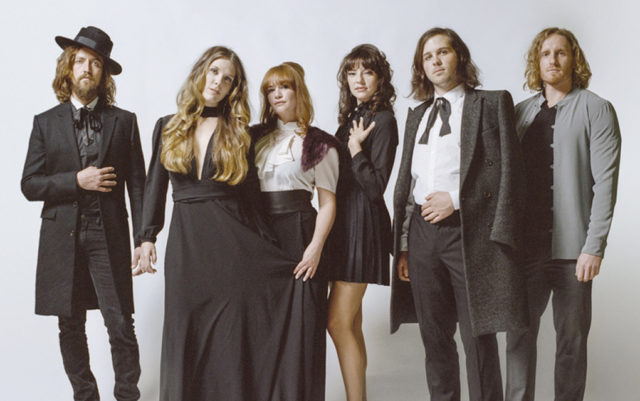 It’s clear in Sarah Anderson’s voice: the vocalist and trumpeter of Denver-based band Paper Bird is clearly a little nervous. It’s three days after the grand finale of this year’s U.S. election cycle, and, as she’s working through the pleasantries associated with phone interviews, she makes a comment about how “weird” the world is. In this moment, it’s evident we’re going to dance around that conversation.

But there’s plenty to talk about until we decide to cross that bridge, like the folk group’s new self-titled album. After four other full-length albums, this is Paper Bird’s first release under a record label, Thirty Tigers/ Sons of Thunder.

“This record means a whole lot more to me now than it did [when we first recorded it], with all of these changes and the things that are happening,” Anderson says, implicitly evoking the outcome of the presidential election. “[The songs] all have a very specific story, but there’s this theme about just keeping your heart open and keeping your head up and moving forward and not letting the bad stuff get you down.”

The local Americana outfit has been making music together for more than a decade. Their formation stems back to the teenaged years of the original members: Esme and Genevieve Patterson (vocals), Sarah Anderson (vocals), Tyler Archuletta (trombone), Paul DeHaven (guitar), Caleb Summeril (banjo) and Macon Terry (upright bass). Back then, they weren’t even sure they wanted to commit to the complexities of being in a band.

“We were like buddies getting together, just writing songs,” Anderson says of those early days. When Paper Bird first started collaborating, the members expressed themselves in a way that was authentic at the time. But as they grew a older, change became inevitable.

A lot has happened since Boulder Weekly last spoke with Paper Bird banjoist Summeril in 2009, just after the release of their first album, Anything Nameless and Joymaking.

After releasing Rooms in 2013 and touring heavily, founding member Esme Patterson parted ways with the band to pursue solo projects the following year, breaking apart the triad of female vocalists Paper Bird is known for.

But Aikins, having been in contact with the band for two years, was ready to fill the void.

“I love that the three women get to share space in a very powerful way and kind of hold space for each other, just as singers and being up front,” Anderson says. “It’s kind of a scary position to be in sometimes and it’s really nice to be able to do that with other people, and these guys are … family.”

Summeril traded in his banjo for the bass around the same time Aikins joined the band. The now six-piece group, typically known for playing in odd time signatures, began laying out the groundwork for a new beginning. Although Paper Bird has always been fond of experimentation, Anderson says their transformation has become, in part, a migration away from the anticipated down-to-Earth roots rock, and a movement toward a more pop/rock sound.

“We made a very clear decision to start over and change our sound, and we’re really coming out full force,” she says before adding, “This is the perfect record to start over on.”

With help from producer John Oates of Hall & Oates, the band recorded their new album at Addiction Studios in Nashville, Tennessee.

“I got nervous and curled my hair before [I met Oates],” Anderson admits.

Anderson wasn’t the only one in the band with nervous energy.

“We were just in that zone, working our butts off,” she says. “It’s fun to look back on what we were writing. It’s like reading a journal.”

Anderson says Paper Bird wound up recording 50 potential tracks, settling on six that made the album. The band hit the road Nov. 1 — eager to “tour their little butts off,” as Anderson says — for the West Coast leg of their tour with Boston-based public radio darlings The Ballroom Thieves.

“It feels so good,” she says. “There was a lot of anxiety leading up to [the release] for sure, because we just wanted to get it out. We’ve been playing these songs for quite a while and we were really ready just to get it into the world. Now we can relax a little bit more and just play these songs and just focus on our live performance.”

Although Paper Bird plans to tour as much as possible in the next year, the future remains unclear — on a number of levels. The conversation steers back toward the vaguely political.

“[The election] was the most interesting thing that happened on this tour,” she says. “I think everyone’s had such an internal unraveling.”

Anderson cannot predict what the next year, or even four years have in store for her or her “family,” but one thing is clear: She is confident about sharing these new tunes with the world.

“We’re all doing…” she hesitates, takes a breath. “We’ve all got each other. It feels really good saying that,” she confesses before adding, “We’re feeling pretty clear about what we’re doing and why it feels good.”