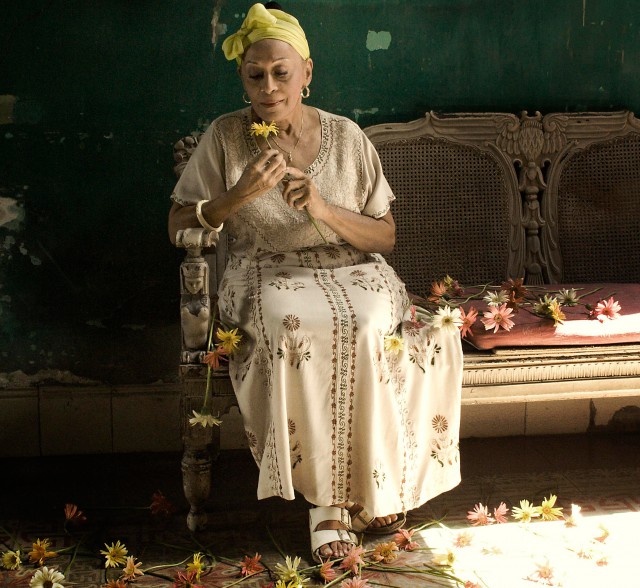 A regal-looking woman wearing a flowing, multicolored dress strolls down a narrow street in Havana, Cuba, casually gesturing with her hands as a tune escapes her lips. She’s singing to nobody and everybody at the same time. As if on cue, a passerby recognizes the tune and adds her voice to the chorus. Earlier, the woman had been standing in front of a microphone in a small studio, her robust voice full of passion as she sang a mournful duet about heartbreak with Ibrahim Ferrer.

These short scenes, filmed in the spring of 1998 as part of the documentary Buena Vista Social Club, are how most Americans first saw the legendary Cuban singer Omara Portuondo. Encouraged by the film’s popularity, she has since toured all over the world, first with the Buena Vista band — a mixture of the sultans of Cuban music — and then a younger generation of musicians under the billing Orquesta Buena Vista Social Club.

Now in her 80s, Portuondo swings through Denver Aug. 20, with these fresh faces, as part of a four-city stop in the United States.

“These young people always admired these musicians that have passed away. They’re doing what is essential — maintaining the traditional music,” Portuondo tells Boulder Weekly, speaking through an interpreter from a hotel room in Madrid. “Many of them were ignorant in the sense that they didn’t know many things that they are learning now because of being with people of other generations.”

Portuondo herself learned music from a previous generation. As a child, she was taught folk songs by her parents, who were convinced she would someday have a career as a singer. After a stint dancing at the Cabaret Tropicana in the 1950s, she began her career as a vocalist, recording as both a solo artist and as part of a band. In May, she added Omara and Chucho, a disc of duets with jazz pianist Chucho Valdes, to her staggering discography.

“When I used to sing, [my parents] used to think I had a future — that I could be a singer to represent Cuban culture to the world,” she says.

As a young singer eager to hear different genres of music, her first exposure to American jazz was through American artists who flocked to Havana, looking to import Latin jazz to the States. But U.S.-Cuban policy soon got in the way of this cultural exchange, and Portuondo and other Cuban artists were banned from performing in America.

In recent years, she has been able to venture to America, as U.S.-based musicians have been allowed to plan goodwill tours to Cuba. A picture from last fall shows a petite Portuondo posing with trumpeter Wynton Marsalis in Havana. The return to a free flow of musical ideas between Cuba and the United States is how it should be, she says.

“You cannot put a barrier between cultures,” Portuondo says. “It’s a good feeling to be able to come over [to the United States] and to continue exchanging cultures and music.”

Though she tours around the world and relishes bringing her music to new audiences, Portuondo’s home is still on the island. After long stretches of touring, she comes home to recuperate and lend a hand to less experienced musicians searching for a veteran vocal presence.

“I love coming back to my country.

When she leaves the touring behind and returns home, the same sights and sounds she knows from childhood greet her. Contemporary Cuba isn’t a lot different, she says, and, for now, she likes it that way.

“Things change like the rest of the world changes — civilization changes, people change — in that sense, it did change,” she says.

But the Cuba glimpsed through that 13-year-old documentary — and the image of a vivacious brunette singing a joyous song — is still very much the same.