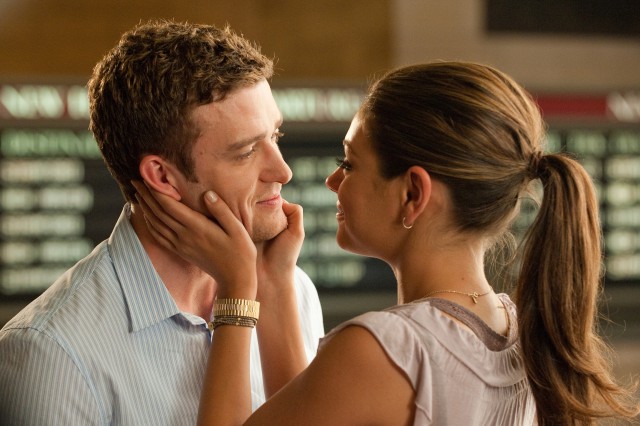 Yes, she was sharing a steamy love scene with Justin
Timberlake in their sex comedy “Friends with Benefits.” Yes, she knew
Timberlake’s reputation as a lady-killer, from Britney to Fergie, Alyssa
Milano, Cameron Diaz, Jessica Biel and maybe Olivia Wilde.

And, yes, she dozed off in the middle of said sexy scene. But she can explain.

“What happened, and what started this wonderful
rumor, was we were at the end of like a 17-hour or 20-hour workday,”
Kunis says. “It was a scene where Justin had to kiss my shoulder, or
maybe my back. And my face was turned away from the camera.”

Timberlake pipes up, “We were doing inserts, little cut-in shots, at the end of the day.”

“You literally only see my shoulder and maybe my hair,” Kunis continues.

“The camera’s on me and her back,” Timberlake adds.

“But Justin had taken a nap during the day, because
he knew it was going to be long one, at lunch time,” Kunis continues.
“And I hadn’t. I didn’t.”

“So when I realized that I wasn’t going to be seen on
camera, I very politely asked if it would be OK if I closed my eyes for
a minute,” Kunis says. “I think it’s important to tell your co-star
when you’re about to take a nap in the middle of a scene. And being the
gentleman and wonderful co-star that he is, he went, ‘Oh, sure.'”

“Why not?” Timberlake gallantly offers.

“Apparently, I closed my eyes for a solid 20 minutes.
Nice little power nap. Next thing I know, I wake up at ‘CUT,’ and the
scene is over.”

That’s how rumors start, and this is how you quash
them. No, JT isn’t so boring in the clenches that he puts Hollywood
hotties to sleep. Kunis, like a good co-star, sticks up for her man. And
Timberlake jokingly plays down the fact that Kunis used a body double
in a few scenes, which makes Kunis crack about just how much Mila-age
she’ll show off in a given movie — the delicate negotiations about how
much bare bottom you get if you’re already offered “side-boob.”

“It was important for me to be working with a woman
who was going to be witty, because we share all this banter in the
movie,” Timberlake explains. “Modern, sexual but able to make fun of
herself and the idea of having sex with a friend.” Which is, of course,
what that phrase “friends with benefits” means.

“We wanted to be self-effacing about everything that is our generation, especially as it pertains to sex,” Timberlake says.

The 30-year-old Memphis native, an ‘N Sync singer
turned solo pop star turned film actor, thinks “the immense
accessibility of sex these days has probably made us lazy, when it comes
to actual human behavior. I think (the phrase “friends with benefits”)
means we’re more accepting of our mediocrity. We don’t want to commit to
getting closer to somebody of the opposite sex, getting to know them as
they really are.”

Kunis, 27, the “That ’70s Show” veteran just now
breaking out in films, doesn’t see the sort of sexual openness that
their comedy documents as a positive, either.

“I think people figure they can talk about sex more,
but I don’t know if that makes us more sophisticated than earlier
generations.”

Their movies last year — his turn in “The Social
Network” as Napster co-creator and Facebook backer Sean Parker and her
much-lauded work opposite Oscar-winner Natalie Portman in “Black Swan” —
turned them into the big screen’s hottest teaming of the summer.

Playboy magazine called Timberlake “the coolest dude on the planet.”

And thanks to her decision to accept a combat vet’s
invitation to a Marine Corps Ball, Entertainment Weekly countered that
Kunis was now “officially the coolest celebrity on the planet.”

Will cool translate to big-screen heat when “Friends
With Benefits” opens Friday? Maybe, but that wasn’t exactly the goal.
They were out to puncture Hollywood’s standard-issue sex scenes.

“When you watch love scenes in a movie, in a theater,
you feel awkward,” Timberlake says. “The actors feel awkward.
Everybody’s awkward. Because underneath the beautiful lighting and
everything, everybody involved is saying, ‘Man, it never happens like
that!’

“The perfection is what always gets me,” Kunis
counters. “Movies always get that wrong — perfect lighting, perfect
bodies, perfect positions. We tend to forget that there’s a lot of funny
stuff that goes on when the clothes come off. It’s not always as hot
and cut and dried as the movies like to depict it.”

“Honestly, that’s something we wanted to use our
bedroom scenes in this movie for, to embrace all of those awkward
situations, because they can be really funny,” Timberlake says.
“Especially if two people are bantering back and forth on how awkward
they’re being.”

Not that they were awkward as a screen couple. Not at all.

“Nothing says ‘trust’ more than dozing off on your co-star in the middle of a take,” Kunis giggles.

Visit the Sentinel on the World Wide Web at http://www.orlandosentinel.com/.