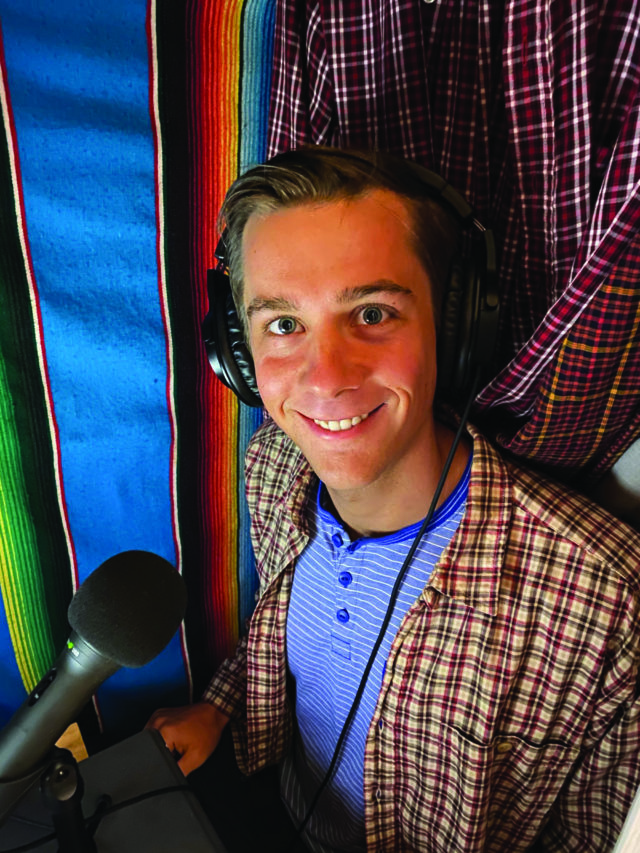 There’s a saying in sales: Show up and throw up.

It means knowing your product inside and out, and being ready to offer that knowledge to your client — to spew that knowledge, if you will.

Because if there’s one thing Tim Drugan knows inside and out, it’s Tim Drugan.

“Everybody has things that they would be mortified if anybody knew about, but if you choose to talk about it, that’s the quickest way to build an intimate interaction with somebody,” he says. “You can kind of sneak your way into their confidence.”

Drugan’s podcast has that sneaky quality, using absurdist stories to skewer his own neuroses, many of which ring true universally.

Like the story of Jimmy, an unemployed man with a female voice in his head telling him he could really try harder. Or the story of Doug, a complaining llama who hates the town’s new waterslide because it takes all the attention off of him, a talking llama, for God’s sake. Or the story of Joseph, about to embark on a late-life marriage, whose children are more worried about their inheritance than their father’s happiness or health.

The stories are wild, stretching beyond the bounds of reality to highlight human foibles — insecurity, vanity, greed — and episodes often contain autobiographical segments alongside fictional stories. Drugan takes a Zach Galifianakis approach to storytelling, assailing the listener with frustratingly confident oblivion, forcing the listener down tangential rabbit holes before dropping them off — laughing — at their final destination.

It’s not for everyone, but there’s a strangely satisfying emotional reward for those who dive in head first.

“I’ve been cultivating this skill set for a really long time, that is essentially a mix between being the town idiot and forcing my opinions on people, and then immediately contradicting those opinions and acknowledging that I’m probably full of shit,” Drugan says. “I think absurdism is what I’m actually good at, which is nothing.”

His love for humor developed as a child, watching his father command attention at dinner parties.

“My dad was just the funniest guy at the table — he would always make people laugh,” Drugan says of growing up in New Hampshire, where his dad was a professor of psychology at UNH. “He was always a performer, and I think it was a subconscious goal of mine to kind of steal that torch from him.”

But a young Tim Drugan struggled to find a place for his humor, often alienating peers and getting in trouble for hyperactivity.

“I think that both my mom and dad were difficult for their parents in their own way, so I was kind of them paying the piper,” Drugan jokes. “My sister was fairly well behaved and they made the terrible mistake of having a second child. I came out with flames in my eyes and made it my mission to be a difficult kid — I was a real maniac. I think I went to the principal’s office, like, 30 times in elementary school.”

Drugan says he was diagnosed with ADHD and ODD, oppositional defiant disorder, a poorly understood mood disorder found in children and marked by frequent and persistent anger, irritability, arguing, defiance or vindictiveness toward authority figures.

But through it all his parents continued to provide unconditional support.

“I very much felt like I had a place at the table, so to speak,” Drugan says. “A lot of my childhood was academics coming over for dinner and I was very much encouraged to sit at the table and listen and participate.”

Still, it’s clear that Drugan has felt some distance between himself and his father. In the episode “Sharing Heart Medications,” Drugan laments the deep interest his father takes in Winifred, his son’s newly adopted dog with a heart condition.

“I call up my parents and they ask me how the new dog is and I let them know,” Drugan recounts in the episode. “Little did I know that this would be the germination that would grow into the gorgeous plant that would become an illustrious tree of excitement for my father, because it turns out that my dad’s heart has many of the same problems as my new dog does. What a link between a grown-up son and his father! And sometimes a grown-up son has trouble coming up with what to say to his father, especially when said son has been a little bit of a dick to said dad and they struggle to find conversational topics. So you can only imagine my dad’s voice coming through the phone with more excitement than he had in a long time. … I had to pull the ear set away from my ear lest I burst an eardrum.”

Drugan pokes fun at himself throughout, maligning his own vulnerable narcissism and inability, as a child, to fully understand the weight of his father’s heart condition. He creates a caricature of himself, his worst traits overblown in order to make them look as silly — and ugly — as they feel. He admits things most of us won’t: his resentment toward the dog for garnering affection from his father and his wife; his hesitation to spend thousands of dollars on cardiographs and lifelong medication for the dog.

But Drugan also shows his underbelly — his love for his father, for his wife, Aimee, for “Winnie,” the dog — as a reminder that he’s a complex person, full of good and bad, just like the rest of us.

“My wife is very much a harmonizer,” Drugan says. “She wants people to be happy. And I think it’s funny to make people uncomfortable. So it’s an interesting dynamic. … A running joke in our marriage is I will say something totally offensive and then she will laugh at it, and then she’ll get mad at me for making her laugh at the offensive thing because it’s the ‘wrong’ thing to say. But I think that there’s a release that everyone needs, especially in today’s world where everybody’s afraid of saying the wrong thing to the wrong group of people. I’m not a bad person because I said an uncomfortable thing — no one is.”

The podcast has come about quickly as a way to move through the uncertainty of unemployment during the pandemic. Drugan’s unsure of where it will take him, but he knows it’s a true expression of who he is, and what he wants to do.

“I’m not going to design a building,” he says. “God forbid, if I ever did, that thing will come crashing down and kill thousands of people. Nobody should let me near anything of substance; just let me tool away on my podcasts. Don’t ever get in the self-driving car that I designed. You don’t want to. But maybe you can try my podcast. I’m not trying to be a millionaire, but it would be really great to be able to make a modest living off of making people more joyful, off of making people see the ridiculousness of a lot of the things that they considered super important.”

On the bill: ‘Tim Drugan’s Story Time’ is available wherever you get your podcasts, or at timdrugan.com