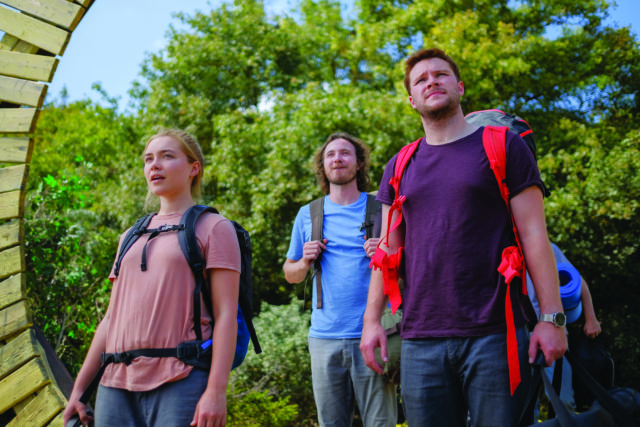 So it’s fare-thee-well, my own true love. We’ll meet an-other day, an-other time. It ain’t the leavin’ that’s a-grievin’ me, but my darlin’ who’s bound to stay behind. —Bob Dylan

Dani (Florence Pugh) is hurting. A family tragedy has left her alone and shattered her sense of security. When she’s not lying despondent, Dani seeks the comfort of Christian (Jack Reynor), her boyfriend who was thinking of ending their rocky relationship before the tragedy. Now, he’s been backed into a corner and looking for a way out — maybe in Sweden.

Pelle (Vilhelm Blomgren), one of Christian’s roommates, has extended an invitation to his mates — Christian, Josh (William Jackson Harper), an anthropology doctoral candidate, and Mark (Will Poulter) — to visit his family’s commune in Sweden for the nine-day midsummer festival. Not wanting to be left behind, Dani invites herself, and the unsuspecting quartet heads off into the Swedish countryside.

At this point in the movie, Midsommar is firmly rooted in reality. But the worst is yet to come, and writer/director Ari Aster makes this clear through ominous images from cinematographer Pawel Pogorzelski and a droning score from The Haxan Cloak — the stage name of British musician Bobby Krlic. Additionally, Aster slows his movie greatly with long, teasing takes and creeping camera movements: He is in no hurry to get where he is going. Aster toys with the audience, eliciting their urgency to get to the good stuff and then punishing them when he does.

Running 140 minutes, Midsommar can be divided into three sections: dread, horror and absurdity. The first two are the movie’s strongest, tackling the pain felt by those left behind. It also manages to turn a moment of graphic horror into a philosophical appreciation for the cycle of life. But then Aster discards all that and starts swinging for the fences, laying one bizarre image on top of another. Some are fascinating — powerful hallucinogens play tricks on the audience as they do the characters — most are just plain silly.

When person-of-the-moment Keanu Reeves was recently on The Late Show to promote John Wick 3, host Stephen Colbert asked the actor a beautiful and surprising question: “What do you think happens when we die?” Reeves took a deep breath and replied: “I know that the ones who love us will miss us.”