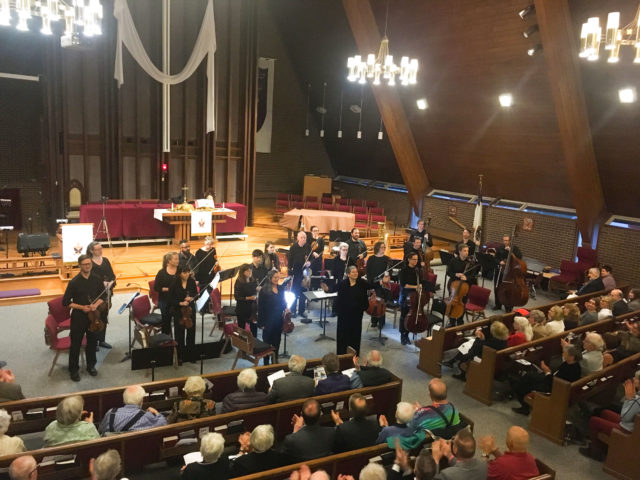 It’s been 276 years, and people are still talking about Handel’s Messiah.

Of course, it’s one of the best-known and best-loved pieces ever written, but that does not make it immune to controversy. One thorny subject is that it has become the quintessential Christmas piece.

But Messiah was not written for Christmas, and only about a third of it has anything to do with Christmas. The rest takes the story through Easter and the Resurrection. The first performances were given in April 1742, during Lent, and most performances in Handel’s lifetime followed that pattern.

Many people consider performances of the entire piece during the Christmas season inappropriate. Conductor Cynthia Katsarelis is one of those people, but she has found a way to reconcile Messiah’s popularity at Christmas with its content. With the Pro Musica Chamber Orchestra, the Boulder Chamber Chorale and soloists, she will lead performances Dec. 1 and 2 of what she calls “a Christmas version.”

“We’re doing the Christmas section, plus,” she explains. In addition to the full Part One, which is the Christmas portion of the oratorio, “we use elements from Part Two and Part Three that illuminate why this birth is so important.”

In Handel’s day, the three parts were performed in concert, as three acts of a drama. “That might be a great way to do it for Easter, but for Christmas it’s possible to tell a coherent, beautiful, majestic and sublime story without going into three acts.”

Katsarelis used three main criteria in selecting musical numbers from parts two and three. The first is to present texts that add to the Christmas story. “What is significant is to tell the story,” Katsarelis says. “I put things together in parts two and three by scenes, so that it makes a coherent story.”

The scenes are smaller groupings of musical pieces within what Katsarelis characterizes as “basically an opera that’s not staged.” Each scene tells a separate part of the story, through a combination of recitatives, arias, duets and sometimes a concluding chorus. There is musical continuity within each scene, with momentum that builds from the first musical number to the last.

Another criterion was selecting pieces that were especially suitable for the four soloists — soprano Jennifer Bird, alto Leah Creek Biesterfeld, tenor Stephen Soph and baritone Adam Ewing. “They are so wonderful, and they’re wonderful together,” Katsarelis says.

Finally, she had to consider the key changes between sections. These transitions from one musical number to the next happen smoothly when the whole piece is played as written, but when sections are cut, new junctions occur that may sound awkward. “I have made sure that there’s nothing jarring,” Katsarelis says. “I find [the piece] incredibly flexible, and by taking things by scenes, it works itself out pretty well.”

She is not the first person to abridge Messiah in just this way. As a violinist, Katsarelis has played dozens of Messiah performances, many of them with the second and third portions cut down to place the focus on the Christmas story. And in her research, she discovered that Leonard Bernstein did such a performance with the New York Philharmonic in 1956.

“You can go into New York Philharmonic digital archives and see his score,” she says. “I didn’t know about the Bernstein [performance] before. He and I didn’t necessarily come to exactly the same conclusions, but close.”

Pro Musica Colorado is not a historical instruments orchestra, but Katsarelis says they perform “on modern instruments with historically informed sensibilities. It’s scaled to the venue (Boulder’s Mountain View Methodist Church). “We’ve got a choir of 40,” Katsarelis says, “which is about the scale of the original Dublin premiere.”

One aspect of this performance that is absolutely authentic is that it is a benefit concert. The very first performance in Dublin was a charity concert for prisoners’ debt relief, the Mercer Hospital and the Charitable Infirmary. Later, Handel arranged for Messiah to be performed annually in London to benefit the Foundling Hospital, which stills owns a copy of the score in Handel’s hand.

The Boulder performances will include a food drive for Community Food Share. Audience members are encouraged to bring non-perishable, packaged food items, such as canned goods, cereal and pasta to be collected at the performances.

And in case you are wondering, yes, the “Hallelujah” Chorus will be included, although it has been moved from the end of Part Two to the very end of the performance. That “may be controversial” for purists, Katsarelis says, “but it sums up the feelings of the story.”

Besides, there is no better way to end the Christmas story than with that blockbuster choral number. “It will knock everybody’s socks off,” Katsarelis says. “They must come to hear that.”