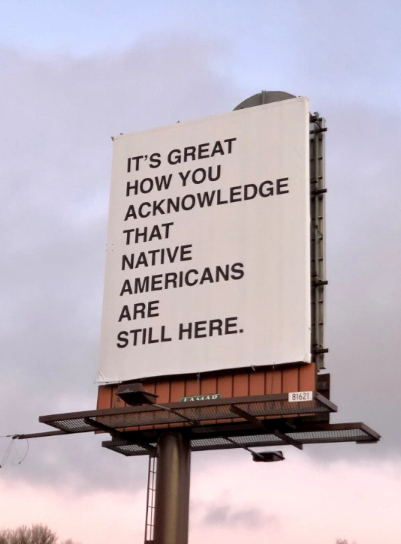 In his 1969 book, Custer Died For Your Sins, Lakota activist and scholar Vine Delorian Jr. wrote, “One of the best ways to understand a people is to know what makes them laugh.”

“Throughout the decades there’ve been a lot of Native scholars who have written about the use of humor within Native communities and how that creates specific relationships and connections,” Tsouhlarakis says. “And when you come away from the communities, those are the connections that I feel kind of float to the surface when you meet other Natives — that specific use of humor.”

Tsouhlarakis is a recent addition to the art history faculty at CU-Boulder, bringing with her degrees in Native American studies and studio art from Dartmouth College, an MFA in sculpture from Yale, and numerous showings in national and international exhibitions in her 20-some-year career. Tsouhlarakis was recently awarded a major Creative Capital grant (up to $50,000) to work on Indigenous Absurdities, an installation project she plans to build around a mix of media: photographs, videos, imagery provided by others, sculpture.

“I don’t necessarily have a vision of exactly how things are going to look, but I want to travel and to talk to people about how humor has played a role in their lives and their connections with other Natives,” she says.

Humor played an integral role in traditional tribal cultures: the sacred clowns (like jesters) of the Pueblo people; the Potlatch ceremonies (where much business was handled, but not without stories, games and merrymaking) of Northwest Coast peoples; or Cherokee Booger dancing (a kind of winter festival with a lot of symbolic — and satirical — ritual). Scholars like Cynthia Lindquist (Dakota), president of Cankdeska Cikana Community College and chair of the American Indian Higher Education Consortium’s board of directors, see how these traditions influence current Native humor.

“Laughter has always been a part of being Indian, and Native humor is culturally distinct and complex,” Lindquist wrote for Tribal College Journal. “Indigenous languages and storytelling are integral to the cultural uniqueness of Indian humor. There are male jokes and female jokes, and most all Indigenous languages accommodate a feminine or masculine version. Indian humor is unique and as such, is the heart of our resilience and survivability. Moral lessons and social order are embedded in storytelling, especially in trickster stories. Teasing someone is a way to point out that they might not be in step with tribal opinion or cultural norms.”

Not least of all, Lindquist points out, humor provides a pathway to healing from personal and historical trauma, and fosters cultural understanding and fresh perspectives.

Tsouhlarakis understands the power of Native humor firsthand, traveling from her birth home of Lawrence, Kansas (where her parents met at Haskell Indian Nations University), to Indigenous art markets and powwows where her father would sell traditional Navajo jewelry. When Tsouhlarakis was in high school, the family moved to Taos, New Mexico, where her mother — a member of the Creek Nation — was appointed director of the Indian health center there.

The realities of Native life in the United States — the poverty, the unemployment, inadequate health care and housing, the lack of easy access to necessary supplies or, as a group of Navajo pointed out from horseback this year, voting stations — are always front and center in Tsouhlarakis’ mind.

“There are a lot of other Native artists out there, even other BIPOC artists, who say, ‘I’m an artist first and then I’m Native, and then I’m Latino… ’” Tsouhlarakis says. “For me, I can’t do that. I’m Native first — I’m a Native American artist. I can’t differentiate those two, and I think it’s imperative for me to make that statement because we’re so marginalized that I don’t want to be naveeks.commistaken for something else, because that always happens.”

Once, at an exhibition of her work in Phoenix, Tsouhlarakis says her sister overheard some gallery patrons questioning whether Tsouhlarakis’ work was really Native.

“Specifically within that exhibition, there was a lot of feedback that the work that I was making wasn’t Native because it was performance video.”

It’s only seemed to encourage Tsouhlarakis to dig in more firmly with her art.

“I always want people to know that the voice they hear from me is an Indigenous voice, that it has ancestry, that it has a background, but it’s speaking not necessarily for people, but from a community,” she says. “Through my work I speak to my Native heritage in different ways, and I try to do that in unique ways, to expand on what the definition of ‘nativeness’ is and what it can be.”

Tsouhlarakis doesn’t yet know where she’ll find a home for Indigenous Absurdities, but she envisions the project as a traveling installation. For more on her work, visit naveeks.com.