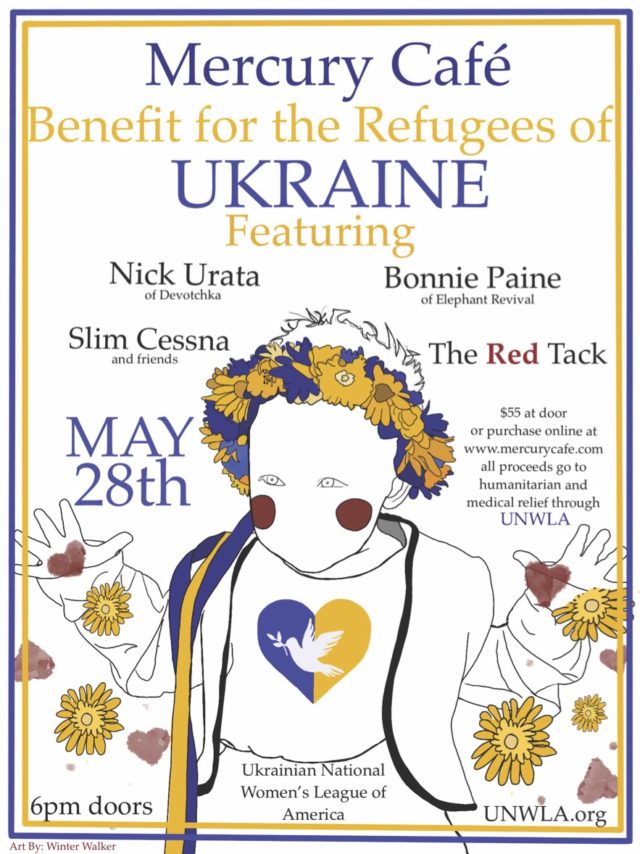 Dora Silver says she put together the Ukraine benefit happening Saturday, May 28 “because of the powerless feeling of watching the war unfolding in front of our eyes and wanting to do something to help.”

According to Silver, DevotchKa’s Nick Urata (her son-in-law) was recently invited to play in Italy to raise money for people in Ukraine trying to rescue families trapped in bombed-out buildings, and instead decided to work with Silver to raise money for Ukraine right here in Colorado.

Silver connected with the Ukrainian community in Denver and got the Ukrainian National Women’s League of America (UNWLA), which has been around for 100 years, involved. The organization helps deliver humanitarian aid of many kinds, from food, water and medicine to generators.

“That’s just scratching the surface of what these women can do,” Silver says. “All of the money UNWLA raises goes to the source of need.”

“For me and my family,” she explains, “it’s also personal, because my children’s father and grandparents were from Minsk and Kyiv and, sadly, most of their [ancestors] were wiped out during World War II for being Jewish. I have seen firsthand the sadness and loss that generations bear through these atrocities, that quiet, hidden sadness that is passed on through generations.”

“So what can we do but show up and sing out our support and love in the way we can?”

Through partnership with the iconic Mercury Café, Silver and the Ukrainian National Women’s League are teaming up with an all-star lineup of Colorado musicians to not just raise money for Ukraine but ensure it goes straight to the source.

Boulder’s own Ted Thacker, whose song “I Cried Like a Silly Boy” was famously recorded by DevotchKa and ended up in the movie I Love You Phillip Morris, will perform at the benefit concert with his band, under his Red Tack moniker. Thacker is well-known around here for fronting Baldo Rex and Veronica, and is passionate about the effort to aid Ukraine.

“The war is definitely the saddest, most horrifying world event that’s happening in my lifetime,” Thacker said by phone. “I’m glad all these people are coming together for it. I get in tears just thinking about it—every day we hear more things, especially the way these poor young Russian soldiers are being brainwashed into these atrocities. It’s insane, being brainwashed into thinking what they’re doing is right, bombing apartment buildings and refugee convoys. It’s horrific.”

“What people are paying for to see this show is not just the music but to be part of something important in the world right now,” Thacker says. “We have to do something.”

“She is awesome,” he exclaims. “If you go out to a show, she’s likely gonna be there. She’s everywhere at once. I don’t think she sleeps. This was her idea. She called her good friends at the Mercury and said, ‘I wanna put this show on.’ Next thing you know, she’s texting me saying, ‘I need you on it.’”

Silver also got in touch with members of Elephant Revival, Slim Cessna’s Auto Club and more for the benefit show. Silver cites Thacker’s “presence and joyful personality”; DevotcKa’s European sound, “the deep-seated memory of where we all started in this melting pot of America”; Slim Cessna’s “heart-felt gospel revival”; and Bonnie Payne’s “voice that transcends you into another realm” as keystones of how she envisions the Ukraine benefit at the Mercury Cafe being “the most beautiful experience possible for all that come to help us, help the people who are suffering in Ukraine.”

For his part, Thacker says he’s not writing any songs for the event, as he prefers to leave political songwriting to “geniuses like Neil Young or Joe Strummer or Bob Dylan,” but he does have a Creedence Clearwater Revival cover planned for the Mercury Cafe show.

“I was listening to Willy and the Poor Boys recently and ‘Effigy’ came on, and I just started weeping because it’s so powerful,” Thacker shares. “The lyrics are perfect for this. It’s an anthem for all times. [John Fogerty] wrote it during the Vietnam War, with that same kind of feeling as what’s happening now. It’s a great song. I hope we pull it off.”

Email comments or questions to editorial@boulderweekly.com