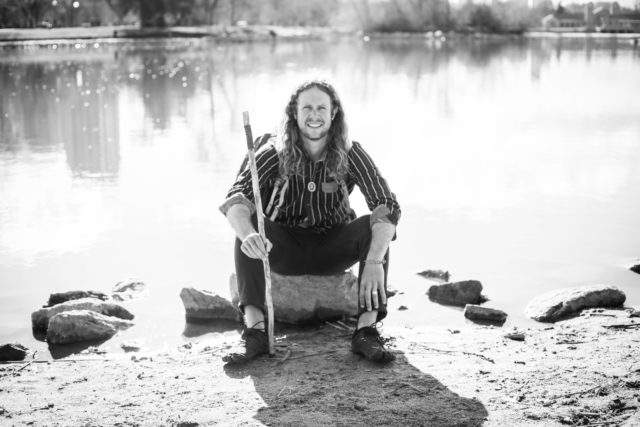 You could say Jonathon Stalls is a full-time pedestrian. You could probably glean that from his toe shoes, well-worn walking stick and routine propensity to trek more than a dozen miles a day.

As we circle Ferril Lake in Denver’s City Park, Stalls fiddles with a leaf he found, greets a passing jogger and jumps back to conversation about his gripes with Denver’s pedestrian infrastructure.

There’s perhaps no greater summation of Stalls’s passion for pedestrianism than his newest publication, WALK: Slow Down, Wake Up, and Connect at 1-3 Miles per Hour, released on Aug. 16 (North Atlantic Books). Through the philosophical collection of short essays, recollections and memoirs, it’s evident that walking is to Stalls what painting was to Bob Ross: a way to engage with the world at a slower pace while learning about yourself.

“It’s about being a moving participant the way you’re made to be,” Stalls says.

Much of the book focuses on a cross-country journey Stalls took in 2010.

“It was totally out of the blue. I had never had a multi-day hiking experience before. I wanted an experience that would re-orient and re-calibrate everything in my life,” Stalls admits. He was 26 years old, coming to terms with his queerness, and searching for belonging. “There was a lot of chaos that I suppressed and buried.”

“I wanted to learn from the natural landscape, the mountains and desert, small towns and cities. I wanted to be with the things that were hard on the inside. I was transformed by the experience. I learned from people—from strangers—at an unhurried pace.”

Eight months later, Stalls and his blue-heeler husky breached the Pacific Coast, and Stalls found his mindset anew. He came to realize how easily he could focus his thoughts and manage his emotions while he walked.

“Our bodies are made—whether you’re on foot or in a wheelchair—to be in movement, to have your body literally mirroring a moving world,” Stalls says, gesturing to the swaying trees around us as we continue our second, third lap of the lake. If our cells’ natural instinct when faced with stimulus or adversity is to keep moving, Stalls wonders, shouldn’t it be ours as well?

His newfound perspective made him uniquely attuned to “the reality of being a pedestrian in everyday places and spaces.”

“I was filled with information related to how unsafe and harmful it was for hundreds of people I would interact with at intersections,” Stalls says. “They were under bridge overpasses, darting and surviving. So much chaos.”

That framework provided the namesake of Stalls’s TikTok account, a platform for sharing the empathy, healing and activism he discovered on that cross-country walk. Stalls regularly shares point-of-view videos of his treks through Denver, aiming to enlighten people on the lived experience of pedestrians as he expounds on poor infrastructure conditions and anything else that crosses his mind in less than 60 seconds.

“This might actually fit me a lot better than any other social media app, because it’s quick. It can be more conscious thoughts and not overly planned,” Stalls muses. “I just started it as an experiment. It took off, and it was so affirming. It’s a tool that’s more natural for the way I’m wired.”

Though it’s likely the widest audience that Stalls currently reaches—his videos regularly get viewed and shared by an audience of more than 100,000 and growing— he has other platforms that predate both TikTok and his writings.

Stalls’ endeavors mainly revolve around Intrinsic Paths, an organization focused on art, community events and, most importantly, walking. Stalls regularly hosts meet-up walks, inviting people to embark on a multi-pronged fitness-, spiritual- and activism-oriented journey across the trails and sidewalks of Denver.

“People join me for a day, or just an hour,” Stalls says. “I see how people get out of their car, experience their neighborhood or community for the first time on foot. They’re like, ‘Wow, I had no idea this amazing park was here, or I had no idea how unsafe it is right across from where my mother goes to an assisted living facility.’”

Even in an outdoorsy state like Colorado, Stalls is dismayed with the way walking is relegated to recreation.

“It’s a more utilitarian pedestrian framework. Like, this is my home, office, commute life. And then there’s the escape to the trail,” he says.

A major focus of his book seeks to bridge that gap. Stalls hopes that society at large will realize the positive benefits of incorporating walking into everyday life rather than confining it to a recreational exception, novelty or luxury, or worse, ignoring the inequities that arise when cities make walking an uncomfortable experience.

For Stalls, there is no walk purely for pleasure, or a walk oriented toward content creation.

“(Walking) seems really simple and basic,” Stalls says. “But when we think about complex social, political or relational realities, it’s always between two human bodies. Your experience moves with mine. It’s an actual tool for teams, campaigns, relationships, peers, neighbors, whoever you’re in tension with.”

Stalls admits that reframing U.S. cities around pedestrians is a long, arduous and frustrating process often hampered by zoning laws, car-centric culture and thousands of miles lacking sidewalks. (Denver has an estimated 520 miles with no sidewalks.) That’s not even mentioning issues like cracks in the sidewalk hampering those in wheelchairs, or crosswalks changing too fast or not existing at all. Dismantling these barriers through law could take years.

“I wish that wasn’t the case. I wish all the lights would just turn on. It can be overwhelming,” Stalls admits. “It’s been helpful to just focus on the specific container of a human body. That’s kind of been my anchoring ground. My framework is: How are we centering the lived experience of human bodies moving the way they’re meant to?”

For Stalls, that means spreading the word through his videos, writings and conversations with everyday residents on his walks, hoping to change hearts and minds at 3 mph.

At the heart of Stalls’ book are practical solutions for pedestrian anxieties, barriers or unfamiliarities.

“Live it,” Stalls advises. “Replace some of your car trips and experience what it’s like to walk to the grocery store. Just be open and available. Connect to why it’s important for us to be doing this more.”