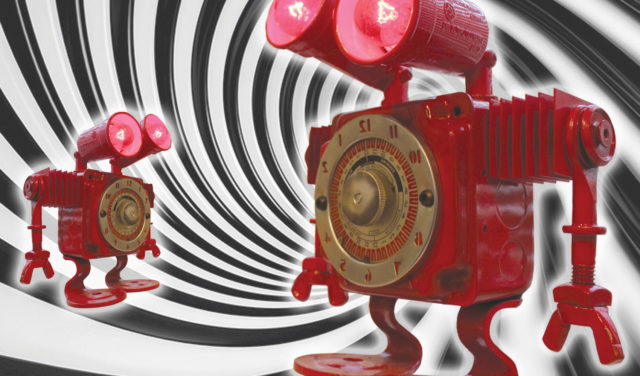 Mitch Levin’s studio is an electric, eclectic creative space, filled with sparks, artists and vibrant ideas. What else would you expect from a place called High Voltage?

And what else would you expect from Mitch Levin, the artist whose whimsical sculptures and recycled material artwork have been exhibited at or represented in more than 30 cities around the continent; who spends his days welding, designing, brushing, texturing and tinkering in his shop from dawn until dusk?

This is his life, his full-time job. And Levin seems to be loving every minute of it. “I’m always working on something,” he says. “I work on about five or six things at a time.”

“A lot of people know me as ‘the sign guy’ because I do a lot of signs for restaurants and that kind of thing,” Levin says. But that’s just one of the many, many products of his craftsmanship. “I’m not a sign maker, I’m just an artist that also does signs.”

A shrewd man with a sharp eye for design, Levin’s work dances with various shapes and colors, balanced in his playful signature style. Some of those vintage signs that have made him famous around Boulder line the walls of his work space: a CU buffalo, a flashing “LOL,” rocket ships and targets. There’s also pop-art made from industrial metal, a Colorado flag constructed entirely from metal tools, bolts and rebar, and oversized metal popsicles that hang happily above his work station.

“Someone dropped off an old washing machine panel and it had these really unique indentations,” Levin says, indicating the stamping on one of the giant popsicles. “I almost threw the metal away, but the more I looked at it, I realized it looks like a Dreamsicle! And I’ve sold like six of those since.”

Scattered among the drill presses and band saws are gears, drill bits, ear protectors, mallets, sand paper, and every manner of hand tool imaginable. It is a creative person’s dream-shop.

Instead of the thick layer of metal shavings and debris you’d expect to find all over the ground of a place like this, there is only a clean green concrete floor. Everything is organized and spotless — Levin runs a tight ship. And at the same time, a laid back one. Classic rock usually pours out of some unseen speaker, while other artists quietly plug away at their own projects at stations around the colorful and multifarious studio.

“I was in another space with like 14 other artists when we moved here from Chicago five years ago,” Levin says. That didn’t work out, though. “They basically kicked me out because I make too much noise, and I make too much dust, and I work too much.”

Probably for the best. Levin found this current space, out on Valmont and 55th Street, shortly thereafter, and started his own artist collective. Today, he shares High Voltage with seven other local artists, who lease stations from him. “We have a great group in here now,” he says. “Everyone has 24-hour access… the door’s open, it’s nice out, we have swamp coolers, high ceilings, good lighting, and everyone helps each other.”

There’s no doubt it’s a tradeoff: Levin provides an affordable, communal place for other craftsmen and artists like himself, and in turn they put up with his noise and seemingly inexhaustible work ethic.

Towering over Levin’s section of the collective is a massive 12-foot heart, constructed from gears and grates and welded metal, a thousand-pound monolith bound for Lyons, Colorado. Levin says it’s going to be “the Heart of Lyons.” 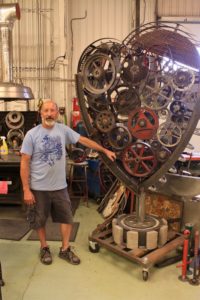 “They want this to be their town centerpiece,” he explains, looking proudly up at his creation. “The idea is that all these gears are supposed to represent different people that you come into contact with during your life. The fact that they no longer move is like the fact that we may never meet each other again but we still have a connection.”

Against one wall of the workspace sits a bright red, out-of-place looking British telephone-booth. But this is more than just another quirky decoration. Upon closer inspection you’ll find a door within; a portal into the crown jewel of High Voltage: the workspace Mitch Levin shares with his wife, Susie, and his daughter, Madison.

The finished products of Levin’s artistic toils line the walls, interspersed with Susie Levin’s duel-medium paintings and Madison’s Tim Burton-esque illustrations. Charismatic little robots peer down at you from shelves, a giant slinky dog smiles up from the floor, steampunk guitars made from bike chains, sprockets, dials and meters hang against the wall.

It’s like being inside of a toyshop for adults.

The weekend of Oct. 20 and 21, High Voltage will be hosting an open studio event. It is the perfect chance for art fans to come see the space, connect with artists and find some art they’ll fall in love with.

In addition to Mitch Levin’s art, Susie and Madison Levin will display their works, as will all seven of the artists who work in High Voltage. Snacks, drinks, exciting art and friendly conversation are sure to abound.

If, however, you cannot make it, you can still go check out some of Levin’s artwork. For one, the door of High Voltage is almost always open, and you can find Levin working most of the time. Also, right in Boulder proper, inside the new building on the corner of 28th Street and Canyon Bouldevard, one of Levin’s recent masterpieces is prominently displayed, the huge face of Albert Einstein, complete with curly rebar locks and a moustache. It’s an uncanny likeness.

And right across from Einstein’s Bagels, no less.

“I had been wanting to do Albert Einstein for a while, and my landlord’s stepfather, Lou, grew up in The Bronx, and he would go over to his friend’s house a lot back when he was like 10 or 12 years old,” Levin recounts. “And he only met the guy’s uncle a few times, but his uncle was Albert Einstein. So, we got into this big conversation and Clay decided he wanted to surprise his stepfather with something for the new building. So, he commissioned the piece and I made it.”

Weighing in at 500 pounds, the Einstein piece is a relative giant, and an incredible display of craftsmanship on Levin’s part.

There’s no telling what kind of sculptures, pop-art or furniture might be rolling out of High Voltage next. Levin’s inspiration could come from just about anywhere — from a productive trip to the Sustainable Materials facility (a short walk from High Voltage), from a friend who drops off an interesting piece of scrap metal, or even just something as simple as a uniquely shaped rock he stumbles upon while out playing disc golf with his son.