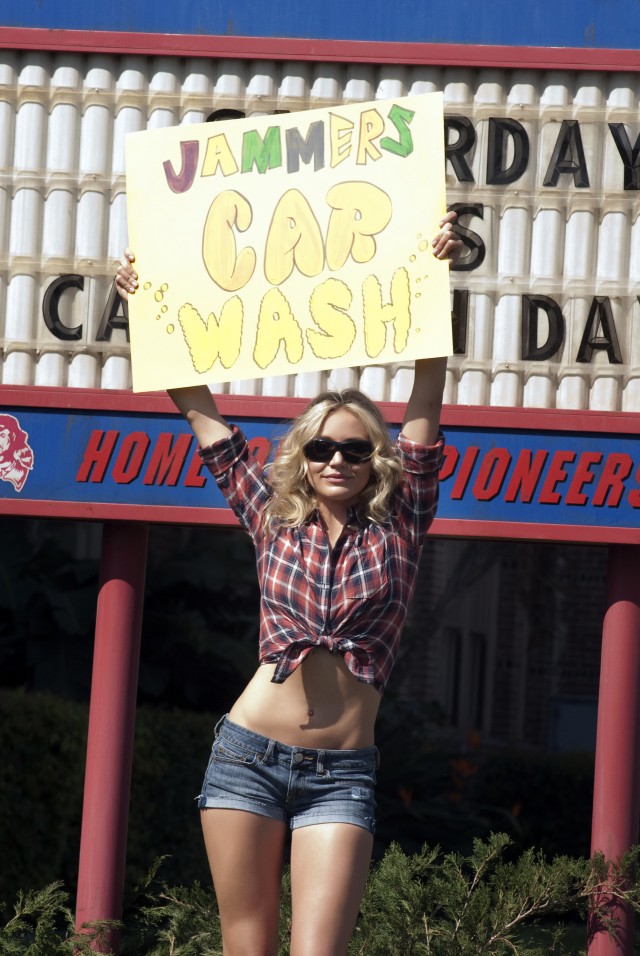 LOS ANGELES — After 17 years of winning over
moviegoers with her mile-long legs, breezy confidence and wide, almost
goofy smile, one of Hollywood’s consummate charmers has had enough. Cut
the charisma and cue the contempt: It’s time, finally, to loathe Cameron
Diaz.

As an unrepentant moral scourge in her new film “Bad
Teacher,” Diaz plays Elizabeth Halsey — an educator who steals, cheats,
lies, sleeps in class, smokes pot in the school parking lot and swears
like a trucker, often in red pen remarks scrawled on the work of her
middle-school students. Dumped by her sugar daddy, Elizabeth’s goal is
to make enough money for a pair of breast implants that she thinks will
help earn her the affections of another meal ticket, a teacher with a
trust fund (Justin Timberlake) who’s as mild as she is wild.

Thirty pages into reading the script, Diaz says she
thought she’d pass on the role. Instead, she made a conscious decision
to try something new.

“I’m trained as an actor to look for a character to
be someone at the end who people like. Reading this script, I was
thinking, there’s no way out of this for this girl,” Diaz says, twirling
her hair and sipping a soy milk latte at a Beverly Hills restaurant.
“She does so many things that are so selfish and narcissistic and closed
off. How can she be redeemed?”

In person Diaz, 38, is perky but guarded, and fond of
the word “amazing.” The script? Amazing. Her costars? Amazing. The set?
Amazing. That soy milk latte? Also apparently pretty darn good. But the
indefatigably cheerful actress confesses she found a certain liberation
in Elizabeth’s dismal disposition.

“Her disdain for life is one that I relished
playing,” Diaz says. “I’m such a cheerleader, it’s kind of fun to play a
character who thinks everything sucks.”

And then, you realize, she’s doing it again: Playing
rotten and R-rated, Diaz may make us like her even more. Which is
exactly what “Bad Teacher” director Jake Kasdan had in mind.

“She’s probably the only actress of her generation
that people are actually excited to see behave this badly,” Kasdan says.
“It’s part of her relationship with the audience at this point that she
is this gorgeous woman who can do raunchy. Cameron appeals to both
genders in a very real way. People just want to hang out with her.”

A native of San Diego and a teenage model, Diaz came
to fame in Hollywood in the 1990s playing sexy but wide-eyed characters.
At 21, she stepped into the first scene of “The Mask” in a slinky red
dress, providing Jim Carrey with an excuse to stammer and gape and
elevating the stock hot-girl role enough to earn herself a string of
indie film parts.

As the high school crush who got away from Ben
Stiller in “There’s Something About Mary” in 1998, Diaz was the naive
center of a gross-out comedy that helped pave the way for lowbrow
franchises like “The Hangover” and “American Pie.” In the movie’s most
famous scene, Mary mistakes a bodily fluid for hair gel.

“Mary, the character, the movie, was sort of
innocent,” Diaz said. “But Elizabeth is definitely a different kind of
woman than existed in the ’90s. She’s driven in a different way. Comedy
is always a reflection of what we can laugh at about ourselves. Humor is
really just people telling the truth. It just depends what truth needs
to be told at that time.”

Now is the time, it seems, for leading ladies who are
in on the joke. “Bad Teacher” comes on the heels of “Bridesmaids,” the
Kristen Wiig movie that has earned $124 million at the box office and
proved that audiences will turn out for an R-rated comedy driven by a
band of mischievous females. Another test of the nascent genre will
arrive in September with Anna Faris’ “What’s Your Number?” about a
frisky young woman wondering just how many men she can get away with
bedding.

“Bad Teacher” was made for less than $20 million from
a script by writers of NBC’s “The Office,” Gene Stupnitsky and Lee
Eisenberg — a sum that would only have covered Diaz’s salary on
“Charlie’s Angels: Full Throttle,” according to Forbes magazine. The
actress took a drastic pay cut to get “Bad Teacher” greenlighted. The
supporting cast includes Jason Segel of “Forgetting Sarah Marshall” as a
gym teacher more suited to Diaz’s character than the rich guys she’s
chasing; Lucy Punch of “Hot Fuzz” as Elizabeth’s goodie-goodie nemesis;
and Phyllis Smith of “The Office” as a complaisant friend in awe of
Elizabeth’s reckless bravado.

“Characters like Elizabeth are mainly written for
men,” Segel said. “We’re reaching a time where women are finally getting
their due as great comedians. There’s something really nice as an actor
about being able to be so nasty with no consequences. Any joke Cameron
thought of, she was able to say and not worry about being likable.”

Diaz isn’t always playing the cheerful girl — in “In
Her Shoes,” she was an aging partier freeloading off her grandmother,
and in “My Sister’s Keeper,” a mother so unsympathetic one of her
daughters sued for emancipation.

Throughout her career, Diaz has both accentuated and
shrouded her beauty — enthusiastically shaking her backside in a pair of
Spider-Man underpants in “Charlie’s Angels” and disguising herself in a
ratty wig and shapeless outfits in “Being John Malkovich.”

In “Bad Teacher,” Diaz wields her lean, 5-foot-9 body
like a weapon. Commandeering the school car wash in a pair of Daisy
Dukes and towering over her 12-year-old students in 4-inch stilettos and
skintight pencil skirts, she is both the embodiment of the sexy teacher
fantasy and a parody of it.

“Cameron knows the power of being a hot woman,”
Kasdan said. “She gets all of those jokes. She’s like an athlete. She’s
got this enormous control of her physicality.”

In what may be the year’s most awkward sex scene,
Diaz and Timberlake share a fully clothed tryst in a hotel room. “The
faces he made are so brave,” Diaz said of Timberlake. “What guy would
ever make those faces? The noises. He was like, ‘I’m creeping myself
out.’ I was like, ‘I don’t even know if I want to know what’s going on
back there.'”

That Timberlake and Diaz are exes in real life, the
actress said, only eased the shooting process. “That would have been
kind of weird to do with someone I didn’t know and trust,” she said.
“With somebody else I may not have known where it stood, but we know
where it stands.”

Diaz is now shooting her next film, “Gambit,” in
which she dons another pair of short-shorts, this time as an ebullient
cowgirl opposite Colin Firth. After her stint as the misanthropic
Elizabeth, her role in the Joel and Ethan Coen-scripted “Gambit” will be
a return to her sunnier persona, Diaz said. “She’s super-engaging and
outgoing and wide-eyed. Everything’s an adventure.”

After “Gambit,” Diaz will star in “What to Expect
When You’re Expecting,” a comedic adaptation of the pregnancy bible told
in intertwining vignettes, a la “Love Actually” and “Valentine’s Day.”

But now that Diaz has played sour, she said she won’t settle for saccharine.

“When I see romantic comedies where at the end you
tie it up with the happily ever after, it makes my skin crawl because I
feel like you never come to a happy ending in life,” Diaz said. “It’s
always just the next progression. That’s what I liked about Elizabeth. I
liked the fact that this was only one stop at the station. She didn’t
make it all the way. Her growth was this increment. She got that one
little inch.”