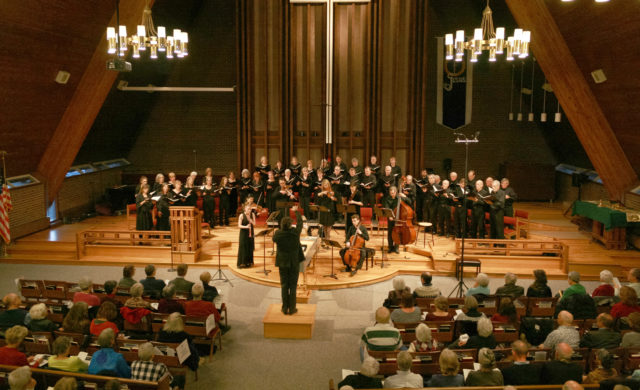 Conductor Zachary Carrettin and the Boulder Bach Festival return to one of J.S. Bach’s masterworks of their repertoire on Sunday (Nov. 11), the Mass in B minor. But if you heard it the last time they performed the same work, in 2015, you should know this time will be different.

In fact, this will be very much a “modern” performance, with no self-consciously historical performance practices. Doing a deliberately non-historical performance seems unusual for an organization devoted to early music, but that decision was influenced both by the large concert hall where it will be presented and by Carrettin’s own philosophy.

“I firmly believe that the acoustic environment, the ensemble size, and the approach that we take with phrasing and tone production and balance should change from concert to concert,” he says. “I hope that what our audiences have come to expect and appreciate is that each time we perform music of the 18th century, there’s something a little different from the last time they attended a concert.

“In fact, this idea of performance practices does not need to be limited to the practices of the time of the composer. I am probably in a very small group of early music specialists who believe that any well-thought and well-executed approach can have depth [and] substance and be a memorable concert.”

Concert is the correct word, Carrettin says, even though the text is that of the Latin Mass. “We’re presenting this as a concert work, and that is what it has become in the last two centuries,” he says.

In fact, the entire B-minor Mass was probably never performed in Bach’s lifetime, and even then would not have been suitable for a service in Bach’s church. It includes music written over 35 years of the composer’s lifetime, assembled and re-appropriated into a final form dictated by the structure of the Catholic Mass — by a resolutely Lutheran composer.

That is part of the mystery and the fascination of the piece, that it includes powerful religious symbolism at the same time that it functions so well as a concert experience. “Of course there is text painting, and of course there are intersections of the liturgy and the music, of course there is a Trinitarian structure to the work with multiples of three, culminating in 27 movements,” Carrettin says.

“We could look at all of that, but I think that there’s a place where the theoretical, and the presentation of a concert work, need to come to terms with one another. The numerology and the painting of the image of a cross in musical notation and many of these inspired details in the score are wonderful to read about and to study, but ultimately we want to have a riveting concert experience.”

The B-minor Mass is broad enough and deep enough, Carrettin believes, that it will speak on many different levels, depending on the religious beliefs of individual listeners. “We are presenting it as a concert work but there are spiritual or religious aspects in our presentation that can be interpreted freely by the audience,” he says.

One added layer of meaning that Carrettin finds particularly significant is that the performance falls on Nov. 11 — Veterans Day in the U.S. and Remembrance Day in the British Commonwealth, a holiday that began as a celebration of the end of World War I exactly 100 years ago.

“However one wants to look at this magical piece of music, by programming this concert on Veterans Day we seek to engage the deeper aspects of this musical work regardless of what they mean to each audience member,” he says. “As audience members enter the space they will be given a flower and asked to remember a loved one that they have lost, and to place the flower on the stage.”

While the performing forces are larger than most BBF performances, the B-Minor Mass clearly fits into the festival’s overall mission. “Some audience members love to hear what they’ve never heard before, some love to hear their favorite pieces of music in a live performance,” Carrettin says. “We offer performances of works that have never been played in 200 years, and we offer repetitions of masterworks that we perform every four or five years.”

The B-Minor Mass is an opportunity, he says, “to be part of an experience, from J.S. Bach to the present, that seeks to connect with our humanity.”