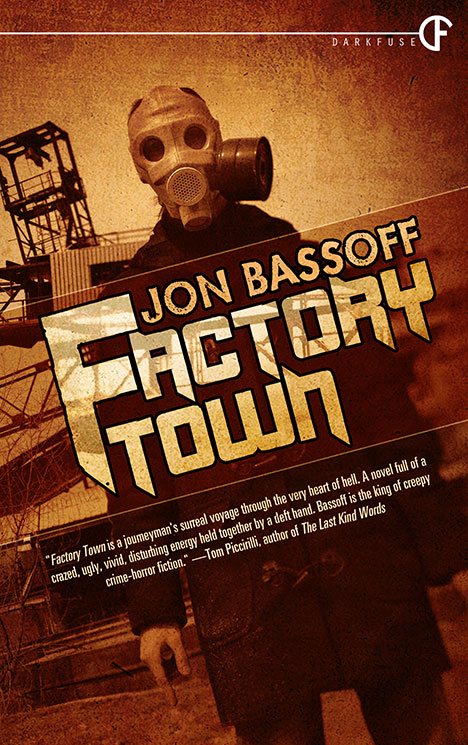 Alot of books get sent to the BW newsroom. So many that we play the pre-Christmas game of feeling the manila envelopes and trying to guess their contents, the most popular answers being supernatural young adult romance, TV talking head’s unified theory of something or other, “stunning debut novel” and a metaphysical guide to fill-in-the-blank.

None of us saw Factory Town coming.

The newly released third novel from Longmont writer Jon Bassoff is a study in bleakness, following the doomed quest of investigator Russell Carver to find a missing girl in the industrial wasteland of Factory Town. Factory Town, which Bassoff will read from at the Boulder Bookstore on Thursday, Nov. 6, is equal parts horror, detective drama and psychedelic dream sequence — what Bassoff calls “gothic noir.” And if you’re looking for a read to get you in the Halloween mood, it’s hard to do much better than the sort of literary nightmare Bassoff packed between Factory Town’s covers.

“Someone said once that if you read a mystery book, even if it’s poorly written, you’ll keep reading because you want to find out what happened,” he says. “But for me, I stopped reading those kind of books because I got more interested in narrators, in unreliable, crazy narrators.”

And an unreliable narrator is exactly what he created in Carver. Is Carver a private investigator or a killer? A man or a child? A sane man surrounded by an insane world, or just as batty as everyone else in Factory Town? There are times when it’s not even clear if Carver is living or dead.

“Surrealism isn’t for everybody,” says Bassoff. “I get that. I respect that people want a more linear narrative. But I feel that it’s there, if you can search for it and find it, and I hope people find it.”

One tactic Bassoff used to highlight the surrealism was the elimination of quotation marks.

“My narrator being very unreliable, I wanted to have this idea of thoughts and dialogue becoming interchangeable so in some ways it becomes difficult to know if a character is talking, or it’s just their thoughts,” he says.

Bassoff says a major influence for taking that approach was The Unconsoled by Kazuo Ishiguro.

“It has these wild, dreamlike, narrations and it really stuck with me,” he says. “It was a book a lot of people hated, but it got me on that style where things move from one place to another, or characters become other characters.”

But perhaps the most prominent character in Factory Town is the town itself, a nightmarish toxic dump of a town, populated entirely by violent lunatics escaped from an asylum. There is more rust than steel, more rot than wood. Characters are missing limbs and covered with boils. There are no children and no one will say why. The whole place is lorded over by a mysterious cowboy, and is a far better place to die than live. One of the many questions readers find themselves pondering is whether Factory Town is actually hell, or just hell on Earth.

“For me, and I’m sure for some people, it’s that idea of the post-industrial world,” Bassoff says. “Detroit and other places that are falling apart. I’m a teacher. And my first job was teaching in Harlem. And there’s parts of Harlem that are like that, where everything around you is crumbling and despair. The narrator is drenched in guilt. And I wanted the environment to reflect that.”

That level of decay described beneath the poison sky might be difficult to find for filmmaker Xavier Gens, who optioned the book for adaptation.

“The screenplay is not done. Obviously, we’re going to have to change a lot,” says Bassoff. “It’s fun to see someone else’s interpretation.”

It’s a running collaboration for Bassoff, whose second book, Corrosion, was also optioned by Genf and may start shooting next year.

“We have a director. There’s still a lot of stuff that needs to happen with financing. I’m trying not to get ahead of myself. I’ve heard enough stories of things falling apart.”

But Bassoff isn’t waiting around either way. He’s already getting his fourth book, The Incurables, ready for release in 2015.