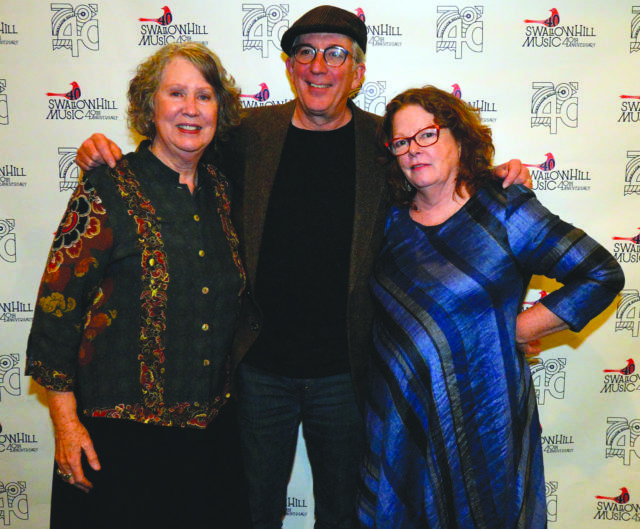 The music started about 40 years ago at a party at Mary Flower’s house in Denver. Singer Mollie O’Brien recalls the gathering in 1980 very clearly.

“I had heard about Mary’s guitar playing right away when I got to town. That was the first time I met Rich Moore,” O’Brien says.

O’Brien and Flower went on to play in a few groups together including the Velvet Torpedoes. O’Brien and guitarist Moore were eventually married and now tour as a duo, and Flower is a celebrated blues and folk guitarist. All three have remained friends and enjoyed long careers mining the well of American roots music.

They have sat in on each other’s sets over the decades but until this month O’Brien, Moore and Flower haven’t played a concert together.

This convergence of talent is ideal since O’Brien and Flower were among the 21 women musicians inducted in 2019 the Colorado Music Hall of Fame as part of The Mother Folkers, the self-described “most carefully pronounced group in folk music.” The ground-breaking collective performed locally starting in the mid-’70s.

“It was great to get together again. We’re all a little more seasoned now than we were in 1979,” O’Brien says with a laugh.

“Those were formative years when you could gig all over town playing all kinds of music,” she says. “I had a great time. I remember opening for Tom Rush at Tulagi’s and going to see the Ophelia Swing Band with Mollie’s brother Tim.” Flower now lives in Portland where she teaches, performs and runs guitar camps.

“I was having a potluck at my house in Wash Park,” Flower remembers. “I invited Rich Moore. I’ve always considered him to be a great guitar player. I had heard rumors about Mollie and she came, too.”

After hearing O’Brien sing, Flower says she had the same reaction most listeners have:

“I thought, ‘What a voice!’ It’s been amazing to listen to her change and adapt to soul, and big bands and now working as a duo with Rich,” Flower says.

As a vocalist, O’Brien is known to ignore the walls between folk, jazz, blues and soul and to occasionally blow the roof off a club or concert hall. Just give a listen to her electrifying version of the Beatles’ “Oh! Darling.” She culls songs to possess from the great writers ranging from Tom Waits and Jesse Winchester to Gillian Welch and Memphis Minnie. Her recordings include duets with her brother, bluesy solo albums and recent collaborations with Moore.

Besides singing on the Grammy-winning True Life Blues: The Songs of Bill Monroe, the West Virginia native was a member of the Hopeful Gospel Quartet on A Prairie Home Companion.

Flower was a finalist at the National Fingerpicking Guitar Championship and is well-known among guitar geeks for both her fingerpicking and slide guitar skills. She breaks out her 1949 Gibson “square neck” lap guitar for the bluesier numbers.

Women who play slide guitar are still very much a rarity in folk and blues circles.

“I remember when I saw Bonnie Raitt in Denver and I just decided I wanted to be a really good guitarist. That’s the stuff!” Flower says. “All these years later I’m disappointed at how few women players there are. I’ll have a guitar camp and there will be 35 guys and three women.”

Flower has recorded 12 albums including Misery Loves Company on Memphis’ Yellow Dog Records and the recent Livin’ With the Blues Again, produced by the Little Village Foundation. Her encyclopedic knowledge of blues, ragtime and swing comes out in her original songs that sound like they were written 75 years ago.

Moore says he’s eager for any opportunity to play guitar with Flower.

“We’re both fingerstyle guitarists and both have an appreciation for the blues,” he says. “We just have that musical communication that isn’t that common. We lock in right away when we play.”

Flower says Moore’s talents include being a stellar arranger and accompanist to O’Brien’s singing, as well as a skilled emcee and storyteller.

“I hired Rich to teach at one of my guitar camps,” Flower says. “He has so much knowledge about guitar licks and techniques, but he also has this wacky sense of humor that is wonderful. It lightened everything up at the camp.”

While Flower is in the neighborhood, she and Moore will lead a guitar workshop Jan. 26 at Swallow Hill in Denver.

When O’Brien and Moore perform, she sings and he mainly accompanies while lending an occasional vocal harmony. O’Brien is looking forward to blending bluesy voices with Flowers.

“Mary has such a thread running through her work connecting to swing and early blues. I love singing with her. It’s like singing with a sibling,” O’Brien says.

For their Colorado shows, the trio is working up songs they can do together including guitar duets and even three-part harmonies, a prospect that Moore finds “challenging,” he says.

O’Brien and Moore have released two albums and continue searching for just the right tunes to add to their wide-ranging repertoire.

As he says, “The music still calls to us and we still want to get out and perform.”