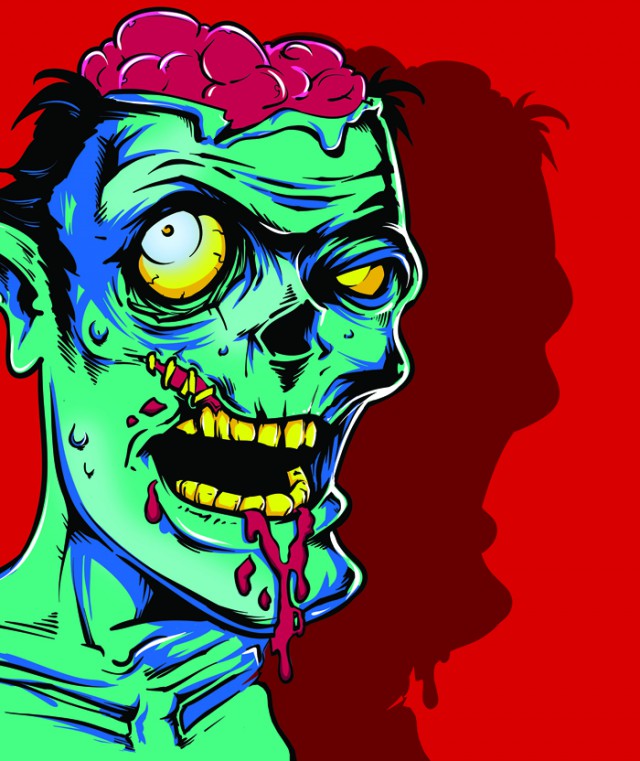 Zombies are on the rise. And I’m not just saying that for the pun.

But why? What’s the meaning behind the phenomenon? Why do people like zombies so much?

Good debaters will tell you: Black-and-white, yes-or-no questions are misleading and often just plain wrong. But in the zombie world, a lot rides on one simple choice: Slow or fast?

“I prefer slow, but I’m clearly in the minority,” says Max Brooks, author of World War Z and The Zombie Survival Guide. “I get why fast zombies are in. You gotta keep people interested.”

Brooks might feel he’s in the minority, but zombie experts of all kinds agree with him: slow rules. Fans of the undead cite George Romero’s trademark lumbering, shuffling corpses in 1968’s Night of the Living Dead as the model zombie.

Andrea Wood, an assistant professor of media studies at Minnesota’s Winona State, says the Romero tradition is too powerful to ignore.

“I prefer slow-moving zombies. I fall in the camp of Romero purist fans,” she says. “I think there’s something more thrilling about the slow, steady onslaught of the zombie horde.”

Zombie survivalist Matt Mogk, who authored Everything You Ever Wanted to Know about Zombies and founded the Zombie Research Society, says fast “zombies” like in 28 Days Later aren’t zombies since they don’t die and come back to life. They’re just infected with a virus.

“I think as a traditionalist, as a lover of Romero, I would lean towards the slow zombies because it’s more traditional,” Mogk says.

Tradition means quite a bit in debates about zombies, even though the creatures aren’t saddled with centuries of legend and myth like werewolves and vampires are. This community’s Bram Stoker is filmmaker George Romero, and with good reason: Night of the Living Dead radically altered the zombie narrative.

Previously a Haitian myth about people enslaved by spells, Romero’s zombies are a totally different breed. In his film — in which they’re only called “ghouls”; “zombie” was applied later — nuclear radiation from a fallen satellite causes the recently dead to rise, shuffle around, attack the living, and eat their flesh.

And they do, which was pretty shocking in 1968. In a review for the Chicago Sun-Times, master critic Roger Ebert relates how horrified and stunned the audience was at the film: “The movie had stopped being delightfully scary about halfway through and had become unexpectedly terrifying.” Since then, hundreds of zombie films have probably dampened the impact a little bit, but the movie’s still used as a standard to judge all others.

Part of its staying power is that Night of the Living Dead isn’t just a scary movie. Romero uses zombies, experts say, to talk about us.

“I loved his stories because they’re so packed with social commentary,” Brooks says. “He uses them to create ways of looking at society. Zombie stories are a safe way of exploring the apocalypse without it being too real.”

Kyle Bishop, an assistant professor of English at Southern Utah University, says that’s a role horror movies often play. “Like all good horror, it’s feeding our anxieties: the fear of getting infected, the fear of disease.”

“I would say across the board, almost every zombie narrative is a barometer for what we’re worried about right now,” he says. “Let’s look at our horror to see what we’re afraid of.”

In 1968, we were afraid of radiation and space exploration changing us. These days, zombie films reflect our fears about infection, terrorism and a lot more, Wood says.

“Backstories speak to the cultural anxieties of the moment when the films were made,” she says. “Night of the Living Dead spoke to Cold War fears in American consciousness. More recently we have narratives about infection.”

Mogk agrees: Zombies are a way to channel big issues in the real world and deal with them.

“I think zombies are popular because it’s a fun way to deal with the concerns we face every day,” he says. “Even economic disaster, zombies are perfect for that. More so than any other monster.”

One of the key ways zombie films comment on society is the creation story — how zombies are made. That’s one of the strengths of such a young monster, Wood says.

“The origin narrative is flexible because the zombie is not as entrenched a being within the literary Western European culture as vampires or werewolves,” she says. “Creators can take liberties with where zombies come from.”

For some, though, there’s value to leaving some questions unanswered.

“I think it’s scarier if you don’t know where they came from or how you get it,” Bishop says, pointing to The Walking Dead as an example. “I really like it when it’s unexplained.”

But there are other things that Bishop would really like to know. Like — as with Denver’s recent zombie crawl and the thousands who will dress as zombies this Halloween — why do people pretend to be zombies? “I can understand why people would dress up as vampires,” he says. “They want to emulate the sexiness and the power. But I’m not sure why people dress up as zombies. Is it because we don’t want to think?” Experts on the topic seem pretty bewildered. What’s the attraction to pretending to be a zombie?

“You got me,” Brooks says. “They scare the crap out of me. At a zombie crawl, they’re all having fun, and it’s like, ‘Wow, they just crawled out of my nightmares.’” Wood says zombie walks started to critique consumerism and capitalism — invoking a common image of consumers as zombies — but now the attraction’s probably to be someone else for a while.

“There might be something kind of liberating in the idea of playing the undead,” she says, “imagining you don’t have to care about things like debt and anxieties anymore.”

To Mogk, the appeal to being a zombie is a basic one among humans: to be accepted.

“Zombies are the only club that will take all comers,” he says. “You’ll see some family with their kids all dressed as zombies. Then you’ll see a scrubby punk rock dude who they wouldn’t want to walk down the street next to. Nobody’s an outsider.”

It’s a nice thought for zombie crawls and Halloween parties. It’s probably not enough to make a survivor lower the shotgun in a film anytime soon. But that’s one of Brooks’ fears: He envisions zombies gradually becoming less threatening, scary and authentic with time, a term he calls “getting boy-banded.”

“Eventually rock and roll morphs from Sid Vicious to the Jonas Brothers,” he says. “Same thing with vampires, we went from Dracula to Twilight to make it peachy and G-rated. I guarantee you somewhere someone is working on a way to take the fear out of zombies and market them to children.”

But it hasn’t happened yet. So grab your fake blood and white makeup and practice your shuffle and moan. Just please, don’t say, “BRAAAIIINS.” Zombies don’t have such high standards.