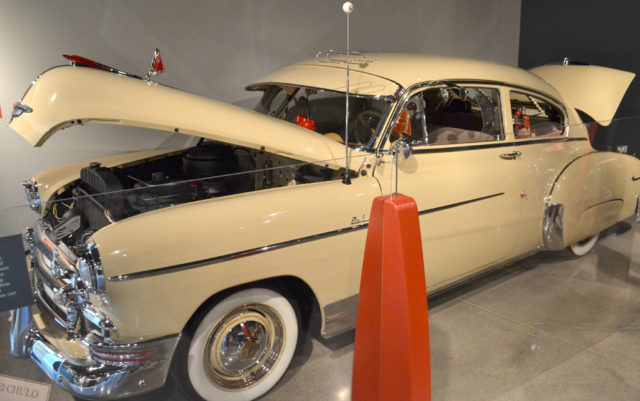 When a woman dresses up, if she wears a dress, shoes and combed hair she looks plain, right? But when she puts on a watch, ankle bracelet, a hair piece, a diamond ring, paints her toenails, manicures [her] fingernails … she’s accessorized and eye popping,” says lowrider enthusiast Randy Lopez in an email with Boulder Weekly. “That’s what we do to our cars.”

Showing at the Longmont Museum through May 14, Lowriders: Cars & Culture explores the vast world of these unique automobiles, which have an extensive following in Boulder County.

“The lowrider scene in Longmont, it’s pretty extensive; there’s like 200 lowriders just in Longmont,” says Jared Thompson, curator of exhibits at the museum, “We just want to showcase these guys and their skill level and artistry.”

The exhibit hall displays five cars, along with several other tricked-out vehicles, including pedal cars and bicycles designed with the same ethic, giving kids a chance to partake in the car culture without a learner’s permit.

Also dispersed throughout the room are pieces associated with the early days of lowriding culture, from zoot suits to long-outdated hydraulic systems.  The exhibit also features a half-car frame, painted in stages to show the intricate multitude of steps in the exhaustive process of adorning the bodies of these artistic vehicles.

The exhibit was curated in recognition of the large Latino community in Longmont, where lowriders are often associated with Chicano culture. But it also acknowledges that as time passes, people of many cultures are gaining interest in the art form.

As a mechanic, he works on lowriders as a hobby and says he enjoys the fact that every part can be customized to the desires of the owner.

The cars usually have specific indicators that classify them as lowriders, such as a hydraulic system that allows the vehicle to be raised or lowered on command. They are also commonly fitted with 13-inch wire spoke wheels and whitewall tires.

Lowriders are direct descendants of the “hot rod” trend in Southern California during the 1920s, where young men of various ethnic groups would purchase very cheap used cars, cut away parts of the body to accommodate a larger engine and lighten the load.

But the culture did not really take off until the ’70s, and by then it was clear that it was a way for Mexican-American men to celebrate their diversity.

Saturday nights on Whittier Boulevard in Los Angeles became famous for the  vibrantly painted cars bouncing up and down as they drove along low and slow.

Such nights created an atmosphere of celebration for Mexican-American customs, and created the space where a historical and cultural context could begin to be created around these vehicles, as it says in the exhibit.

The tradition of building and sharing lowriders has continued to this day. Tomas and Alberto Quiroz are brothers who own Auto Body and Glass of Longmont. The shop has its roots in the single bay space where the duo originally started out working on lowriders. Tomas has been working on cars for over 15 years, and is the creator of the red Chevrolet pickup truck featured in Longmont Museum’s exhibit.

The brothers now have about 20 bays that they use mostly for their repair work, but also to build lowriders for themselves and their customers. For them, the work is a labor of love, as it takes months at a time to complete the customization of just one vehicle.

“For us, running a body shop, we don’t make a living out of [building lowriders] we do it because we love working on the car,” Tomas says, “We have to be happy, because you’re getting paid for what you love to do.”

According to the brothers, every step in the process is important. At each step it is necessary to visualize where the project is going next and to pay attention to the fine details in order to get a quality finished product.

Lowriders have transcended the mechanic’s bay and joined the realm of art for a reason: The effort and creativity put into the detail of the car can only be viewed as art.

There are roughly eight steps to the painting process of a lowrider, depending on the finish of the vehicle. First stripping off the old paint to get the car down to its metallic shell makes way for several layers of primer that will hold the paint properly to the frame. Next, several layers of paint get added to the car, and refined until there are no bumps, drips or runs, making a smooth finish. Custom details from etchings to pinstripes are then added.

Beyond the paint job, lowriders generally have a lot of custom work on the interior of the car as well. For example, the seats and console can have all of the original material replaced with leather, stitched with intricate thread designs, creating patterns that reflect the artist’s tastes. The steering wheel can be replaced with different sculpted pieces of glossy metal, and the windows of the vehicle can be etched to showcase any type of design.

While some cars lend themselves to these modifications more easily  than others, any car can be lowered with the type of suspension that gives lowriders their name. As long as the car has its tires replaced to compensate for the difference in height, it can become a lowrider.

For the Quiroz brothers, it’s at the very end of this long process, which takes months of work and thousands of dollars to complete, that the car is finally presented to the customer.

“My favorite part is when the customer comes to pick up the car and they kind of have an idea of what the car is looking like,” Alberto says. “But to see the smile on their face, and handing them the keys, seeing the satisfaction in their face is [the best].”

Kevin Rodriguez, who works with the brothers at their shop, believes this is art in its finest form.

“The work that these guys do on these vehicles is pure artistry,” Rodriguez says. “It’s hard for people to fathom what they bring out of their minds to apply to a vehicle to make it turn out the way it does.”