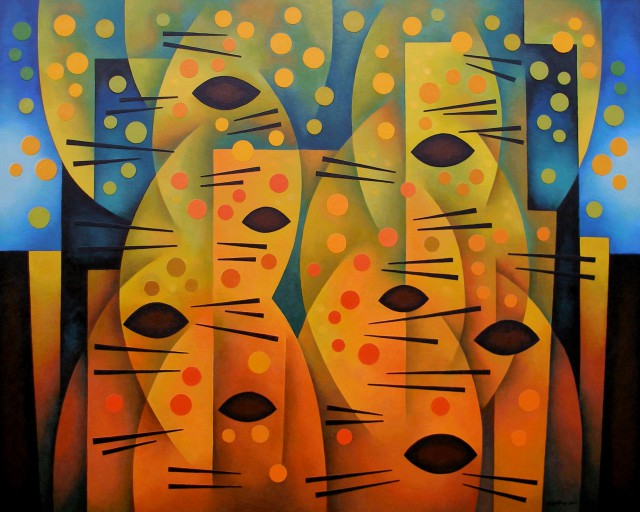 Displayed in the Canyon Gallery at the Main Boulder Library through March 3, the exhibit challenges visitors to bend their minds and grasp their surroundings in a new way. The show is courtesy of the William Havu Gallery in Denver, which represents the artists. Greg Ravenwood, Canyon Gallery curator, curated the show.

A journey beyond the obvious begins in the main gallery where viewers will see the artists’ novel outlooks in a glance. Cooper’s tiny black, white and red chairs pop up on top of display columns. Sushe’s abstract paintings burst with color blends and organic forms to unveil nature’s interior. Tracy’s oilon-panel paintings capture Colorado’s beauty through exaggerated shapes and bright colors.

“Time” came together both inside and outside Cooper’s studio. The project started with a concept that Cooper perfected in a computer drawing. Then, Mike and Ann Eisenberg, professors in the computer engineering department at the University of Colorado at Boulder, invited Cooper to their lab to learn the art of laser cutting Plexiglas. Thrilled with the material, Cooper chose a local firm to cut Plexiglas into blue, red, yellow and orange pieces for “Time.” Returning to the studio, Cooper played with the colored pieces until each panel pleased her visually.

Cooper then fused the pieces together with solvent. “Time” lures viewers into bedrooms linked to life.

features two 13-inch-high, slightly skewed bronze chairs facing each other. The chairs, unencumbered by people, appear to be conversing. Cooper plays with perspective in public spaces as well. Two murals on view in the rotunda of the City and County Building in Denver depict the city’s growth from two 20th-century perspectives.

Felix sees trees, weather, woods and other natural wonders as colors and shapes. The artist’s abstract paintings in many mediums invite visitors to abandon their notions about nature and enter new territory. Sushe’s work is inspired by abstract painters working during the 1930s and ’40s and by the Transcendental Painting Group in Santa Fe that was founded in 1938. The Transcendental painters’ goal was to change the appearance of the physical world by using color, light and design in imaginative ways.

In “Aspen Grove II,” Sushe accentuates the beauty of aspens on a crisp, fall day. Orange, red and lime-green ovals shine against a brilliant blue and black background. Tiny circles, as if scattered by wind, fall across the painting. The artist’s intrigue with Asian culture can be seen in “Nothing But Blue Skies,” an acrylic and collage work. The effect is spiritual with pieces of Asian papers scattered around shapes and forms in blue and deep red colors. In “Black Square” and “Orange Stripe,” two works hanging next to each other, Sushe turns simple shapes into cool designs by commingling colors and forms for a new view of squares and lines.

Tracy Felix’s landscapes are familiar with an edgy look. In “The Flat Irons,” Tracy blends a recognizable Flat Iron view with marshmallow-shaped clouds and deep blue forested mountains dotted with white spots. “Storm over Mount Yale” features violet-black color under white puffy clouds above a snow-covered mountain for an intense look at nature getting ready to go wild. Born near the Sangre de Cristos mountains, the artist’s passion for place that resonates in his art developed while hiking and skiing in the mountains.

Tracy, who now lives in Denver, turns his urban scene inside out as well. In “Shining Denver,” the cityscape is a mix of blue, red and brown vertical shapes against a backdrop of mountains represented by pointed color forms. A white, star-shaped sky sparkles in the city scene.