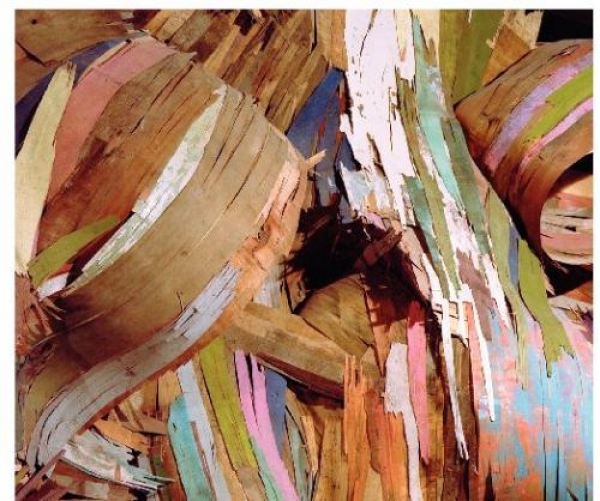 Imagine what flesh would look like if it were made from thin layers of wood, or how a wave in a choppy sea would appear if it were frozen into overarching planks. Picture an animate sense of movement emerging from this wooden mass and visualize shifting colors undulating across it.

Now think of one of these shapes protruding from the corner of a room and stretching across a gallery wall. From Feb. 24 through mid-June, viewers will be able to see a similar sight emerging from the walls on the first floor of the Boulder Museum of Contemporary Art.

The piece on display will be a custom-built, site-specific installation by internationally recognized Brazilian artist Henrique Oliveira, who works in sweeping gestures of wood that consume the viewer with their size and texture.

Oliveira works primarily with reused strips of pliable fencing wood that commonly surround construction sites in his hometown of São Paulo. He often uses this medium to explore the texture of thick gestural brushstrokes that one would find in an oil painting. Oliveira compares this concept to taking a small corner of a densely textured painting and enlarging it to the size of a wall, allowing the viewer to see the subtle details of a brushstroke.

“It’s the idea of recreating the painterly shapes and textures via sculpture. I look at the texture on a canvas and try to enlarge it to occupy a more sizable space, translating the softness and viscosity of paint into the hardness of wood,” Oliveira says.

Many of his installations and sculptures are titled Tapumes, which in Portuguese means both “fencing” and “something temporary.” His installations are often made specifically for the gallery they are shown in and are later dismantled, such as the one for BMoCA.

Oliveira will also have seven acrylic paintings on display, which bring to mind the freedom of line and pulsation of color sometimes present in Abstract Expressionist paintings.

“I think of my work like a combination of painting procedures. It’s a little like a DJ sampling different songs and combining them into new music,” Oliveira says. “I take some brushstrokes from other painters and recreate them, putting them onto the canvas in layers.”

This approach results in brightly colored, swirling paintings where chaos and order intermingle. Paint eddies in tides of color, then washes out in fluid stripes and stratum.

“In the end, most of my paintings are like landscapes. There’s always this dialogue between the physical surface and the image that results,” Oliveira says.

“They have all the liquidity of paint and the velocity of the gestures with which I apply it, but [it has] been controlled and transformed into patterns.”

Boulder artist Jessica Moon Bernstein will also have a site-specific installation on the upper level of BMoCA. Her piece, which is made out of severed bicycle inner tubes, is reminiscent of an undulating mass of sea anemones in a teeming coral reef. The inner tubes are cut into smaller hoses and then arranged in a tightly packed mat with the orifice of the tube facing the viewer. Bernstein used these mats to cover the majority of the walls in the upper gallery so that the viewer is enveloped by the work.

“My art has always dealt with environmental concerns,” Bernstein says. “With this project, I’m taking something man-made that’s considered trash and repurposing it through this process of renewal.”

Bernstein estimates that she used 10,000 inner tubes that she gathered from local bike shops to complete this project, which she titled Ourrubberos. The word is a variation on the term “ouroboros,” which is an ancient symbol depicting a serpent eating its own tail, representing cyclicality and recreation. Bernstein found this applicable to her reincarnation of the inner tubes, which offers commentary on the effects of mass production and unrestrained consumerism.

“Going to bins behind all the bike shops in town and seeing this endless supply of used inner tubes made me think how this is just one town, and that the same thing is happening all over the world,” Bernstein says. “It’s a lot of rubber, and it’s constantly being produced and constantly being thrown away. It brings up an interesting concept about the responsibility of owning something and then the leftovers of that ownership.”