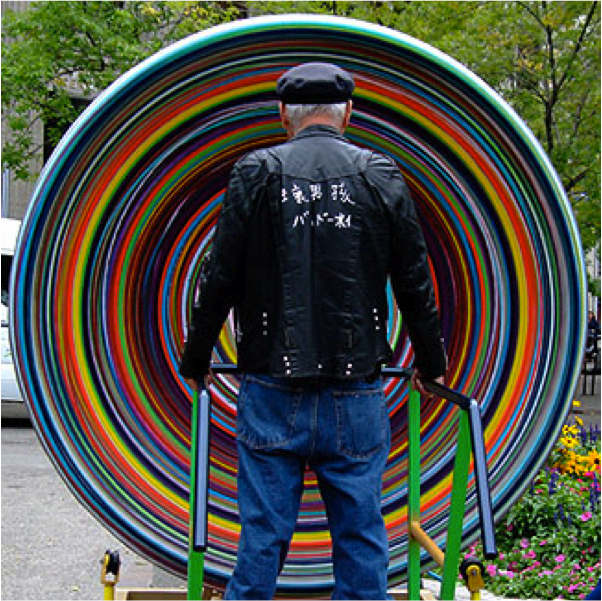 We made a commitment to the community to have a series of discussions about public art,” Matt Chasansky, manager for the City of Boulder’s Office of Arts and Cultural Services, told the audience in the Canyon Theater on Sept. 29. “So we’re here to make good on that.”

The crowd was small enough that the four speakers didn’t bother with microphones, instead sitting on the stage, eye-level with the 20 or so who had come to take part in what on the surface seems like incredibly mundane and esoteric bureaucracy: a Q&A with a city public art selection committee.

Esoteric bureaucracy? Yes. But mundane? No.

Though it had rotated membership since, this is the same panel and the same public that only months ago clashed over a much-ridiculed proposal to install giant red letters spelling the word “yes” on the library. And now that the city has launched its nine-year Creative Cultural Plan, there is the potential for a lot more public art on the way, and a lot more clash if not unrolled properly.

Throughout the evening, Chasansky, who moderated the event, spoke to a desire for transparency.

“Process is so important to public art,” said Chasansky. “A lot of times, there’s a misunderstanding about public art in this country. It’s democratic. A lot of people, when they have art dropped fully formed onto their laps, they don’t get to see that process.”

To give an inside look, Chasansky discussed a variety of different processes for how proposals for public art are sought — some hewing closer to open calls and others being more curated by city officials.

“Bureaucrats like myself never get to pick the art, which is a shame, because I have great taste,” he joked.

Chasansky then broached the topic of the next piece of public art for Boulder: a series of installations from “artists working around the city to create a diverse variety of experiences.”

“Those are very simple statements that took us a long time to wrap our mind around,” Chasansky said.

There was then a series of slides showcasing some examples of the type of installations that the city was hoping to commission.

While those slides showed in the background, Chasansky put some introductory questions to the three present members of the Public Art Selection Committee, Joan Markowitz, a curator for the Women of the West Museum, Felicia Furman, who is a board member at The Dairy Center for the Arts, and Sandra Firmin, director of the University of Colorado Boulder’s art museum.

A big question was what they felt the criteria of being temporary meant for the work and for the process.

“The idea of doing a temporary art project really appeals to me right now because what we’ve seen now, and going back 30 years, is that trying to find consensus for a permanent piece — we haven’t found a lot of success,” said Markowitz.

Firman felt that the idea of it being temporary expanded the available mediums, and made the work more responsive to contemporary events.

“I think it shifts the conversation fully formed to something that’s a big from a finished piece that has to be more experimental,” she said.

In a clear nod to the failed “yes,” Chasansky also asked the board about what happens when the public doesn’t particularly care for a piece of public art.

“What would you say to them?” he posed. “I think my mother had only one mantra that she repeated over and over again: That’s what makes this world interesting,” said Firman. “So I’m going to say that.” “I’m going to say ‘Go talk to Sandra,” Markowitz joked. “I don’t expect people to love everything.

I think actually, if everyone loved everything, then we’ve failed. That’s failure.”

All three panelists agreed however that if a piece fell over and squashed someone, that would constitute failure.

But it wasn’t quite as smooth when Chasansky opened the floor to questions from the audience. One of the first questions was from an audience member who wanted to know how to submit a proposal, and was told that this project was not accepting proposals.

“This one is an invitational,” said Chasansky, who added that it provides more of a “curatorial approach,” something this project needed since it was a series.

“As a comment, I’m surprised, because I remember the backlash over the ‘yes,’ which seemed to be because the public didn’t have much input and this seems like a closed process,” the questioner said.

“Yeah, but only in terms of commenting on pre-selected pieces,” the man said.

“I understand the curatorial process, you’re taking this time,” another questioner said. “But down the road, there are wonderful artists in this community who have not had the opportunity to get their work into the public. Down the road, do you have the intention to do more of an open call? What can we do to help our 3,800 visual artists in Boulder County?”

Chasansky said both yes, and that he is interested in finding other ways beyond just commissions to grow artists in the community.

Another question posed concerns over what would happen with the temporary pieces once their time was up, something Chasansky said would be worked out with the artists ahead of time.

Another question asked how the art’s success would be measured.

“How engaging is it?” said Markowitz. “We want to see people engaged.”

The panel was also asked of the likelihood of seeing more bottom-up than top-down art, graffiti or other crowdsourced work, something the panel expressed general support for.

“I think that’s the trend these days is to really include public participation,” said Furman.

After nearly two hours, the already small audience began to dwindle and things were brought to a close.

Please Touch the Art–A Conversation with Jen Lewin, the next in the city’s series of public art discussions will go down on Monday, Oct. 6 at The Studio (Boulder) at 3550 Frontier Ave., Unit A2, Boulder.