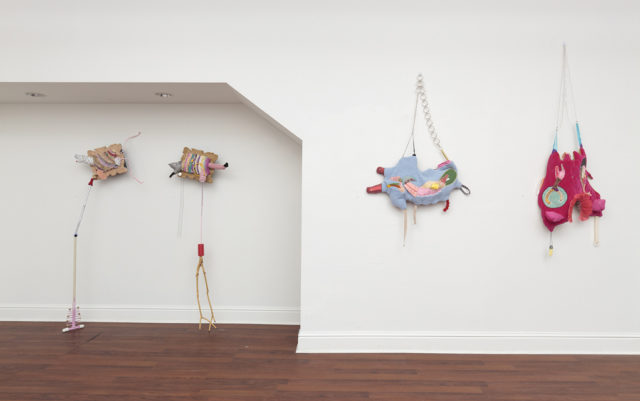 At first glance, it’s not quite clear what Jennifer Pettus’ artwork represents. Upon further inspection, it’s still not clear. But that’s the point.

“I’m never trying to make a definitive statement with my work,” Pettus says. “I’m trying to open it up and leave it to question instead of refining it to one topic. The goal I work with in general is to kind of blow things up, rather than put a box around them.”

In her new exhibit, Plot Twist at the Firehouse through June 25, Pettus showcases her fiber-based mixed media sculptures. The pieces feature various types of fabrics and objects assembled into unusual shapes. While many of the materials Pettus uses are easily recognizable — rubber gloves, snaps, suspenders, sticks, googly eyes — their meanings and functions are left up to the imagination.

The one clue Pettus does provide is in the exhibit’s name. For Plot Twist, she drew inspiration from theater. With props and costumes in mind, she wondered how her pieces would be used on stage.

“I think with a lot of my work there’s a function that isn’t disclosed,” she says. “There’s something about that I like. People are prompted to figure out what the rest is. What am I looking at? What is it supposed to be used for? The hanging pieces are leaning more toward costuming; the standing ones are more theater props. I want to imply a function, but I don’t want to impose a function.”

Pettus was involved with theater as a kid, and she says its influence continues to seep into her work. Just as a “plot twist” is unexpected, she hopes the show will be the same.

“You go to the theater and productions have these tools they use to take you on this journey,” she says. “I was kind of hoping to do that visually here to some extent: defy expectations of what people are going to see in an art gallery.”

Pettus’ interest in art started at an early age. In college, she began studying art and had an aha moment in a basic sculpture class.

“I realized you could make art out of anything,” she says. “To me, it felt more accessible. I could make art that included material that we see in our everyday lives that maybe people would connect with more. I certainly did. I connected with art that wasn’t just sort of an oil painting on a wall or a metal sculpture.”

She uses mostly found objects, frequenting thrift shops and garage sales. One of her pieces can include a variety of things from multiple genres: metal, clothing, jewelry, sticks, furniture, toys and more. She collects items knowing that eventually they’ll find their way into her art.

“There’s a little bit of hoarding involved,” she says with a laugh.
The found objects give viewers visual cues that can guide meaning. A couch leg can insinuate a piece is something to be lounged on or a button can propose it’s something to be worn. While we know the purpose of a doorstopper, Pettus places it in an odd location that questions its past and future function.

By working with used items and antiques, Pettus infuses history into her art — taking the old to make something new.

“I’m always looking for something that has a story of its own: What it’s been used for, and how can I bring that story into what I’m making, making another story out of its story,” she says.

A lot of her process involves what she calls “making the stuff to make the stuff.” She utilizes various techniques including embroidery, quilting, needle felting, flocking, hand stitching and pencil drawing on fabric — all of which she taught herself to do.

“After my first child was born I had a show scheduled. I needed to figure out a way to make work with a fussy baby who needed to be held most of the time,” she says. “I had pencils and fabric, so I started drawing on fabric with the hand that wasn’t preoccupied. I created an entire body of work literally one-handed. I loved the limitations of making do and the convenience of learning at home but also the resulting frailty of the work.”

She chose many of the techniques she uses because they specifically don’t require specialized training. And after becoming a mom, she was spending a lot more time at home. In the end, her art mirrors the flow of her everyday life.

“In my ‘real life,’ I feel like I’m switching gears constantly between trying to be an artist, trying to be a mom, trying to do this or that. That is naturally going to find its way into my work because that’s naturally how I function,” she says. “So I like that sort of back and forth. You’re on one train of thought and then you’re on another.”

Pettus draws a lot of inspiration from the home. She likes the association with the feminine and domesticity.

“I think a lot about things that are valued in our society, and how women are often undervalued, especially women’s work. And craft has always been a lesser form of expression,” she says. “I’m always trying to highlight things that are maybe not as visible in the world — things that have been thrown out or cast aside or things that haven’t been given the same kind of voice as other things have been. The handicraft is part of that — highlighting it as an art form, rather than something that is simply functional or a lesser
art form.”

When crafting a piece, Pettus plays around with different elements, combining whatever feels right. She works on many pieces at once, allowing her to jump around. She lets it come organically and admits she can’t really explain the reasoning behind her artistic choices.

In the past, she’s called her work a “calculated hodgepodge.”

“It’s really a description of putting these disparate materials together in a way that makes sense, but I can’t explain how it makes sense,” she says.

“Hodgepodge is one of those colloquial terms that I find interesting. It brings a little humor into the work, which is another way to get people engaged. It can mean chaos or that it’s not well thought out. In this case, I try to temper that yes, it’s a hodgepodge, but it has a system, and even I’m not privy to exactly how that system works.”

As her art is governed by intuition, so is the meaning behind it. She’s telling a story, but she doesn’t know the story she’s telling.

“I don’t want to be analyzing what I’m doing all the time. That would sort of kill the joy of making the work,” she says. “I don’t know that I want the answer to the story. I really enjoy the journey in watching other people sort of figure out what’s going on.”