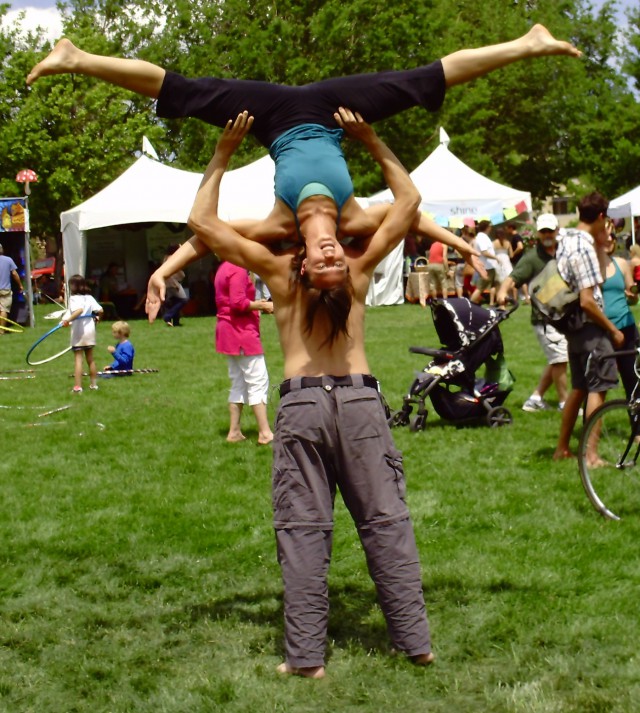 Right: Mia and Joe from Cat’s Gymnasium in Boulder, who did not want their last names used, demonstrate the shoulder-to-shoulder pose during the Hanuman Festival on June 18.

Jason and Chelsey Magness had only been married five days before they decided to stick together — literally — for 24 hours.

The newlyweds attended the Hanuman Festival, a four-day, community-oriented yoga and music festival in Boulder, where they took the vow to be in constant physical contact with each other for 24 hours.

“Originally it was supposed to be 24 hours,” Jason Magness says. “And then at the end of it we kind of just spontaneously tried to make it all the way home since we hadn’t been home since we married.”

By the time the couple had left the festival and successfully convinced airport security to allow them to maintain contact on their way back to their home in Bend, Ore., they had maintained contact for a total of 54 hours. They were practicing love conservation, and they believed they could symbolize their emotional connection by maintaining a physical one.

“The [airport] supervisor got it,” Magness says. “She met her husband and married him three days later in Vegas, so she was a very big proponent of love conservation. She basically found a loophole for us and there was no specification on the age of the child, so she let me carry Chelsey through security.”

Jason and Chelsey Magness are both teachers of acroyoga, a hybrid of acrobatics and yoga, and the two were in good company at the festival. Scattered around the lawns of Boulder High School were pairs lifting each other on their shoulders and backs in fluid motions.

The festival, having just wrapped up its inaugural year, centered around bringing participants to not only take classes, but to spark their enthusiasm to make a change for the better in the lives of those around them, festival founder Valerie D’Ambrosio says.

“The way I teach yoga is that we have to love ourselves,” she says. “It’s about understanding the self, and once you do, then you can go out there and really make your mark in the world and take your gift and make change.”

The festival was full of various kinds of yoga practitioners and the classes offered a wide selection to students with options such as meditation, vinyasa flow, arm balances and inversions, and chakra flows.

D’Ambrosio says when coordinating with teachers for the event, offering such a variety was her goal.

“We were looking for all styles of asana,” she says. “[The teachers] were all super enthusiastic.”

Teachers from across the U.S. participated in the event, included Simon Park, Darren Main and Tiffany Cruikshank. Also teaching at the festival was Seane Corn, a founder of Off the Mat Into the World (OTM), an organization that partnered with D’Ambrosio to put on the event.

The organization focuses on igniting grassroots social change through yoga. Corn says she chose to partner with the Hanuman Festival because of the festival’s drive to encourage yoga practitioners to become inspired to make positive changes in their communities.

“It was a natural partnership,” Corn says. “We want to work with like-minded people and Valerie is as much committed to service and activism with Hanuman, and we wanted to support that.”

The environment of encouraging individuals to make an impact on a larger scale attracted hundreds to the festival, some from different parts of the country.

Desiree Ouellette, a native of Washington state who was in town with her husband for the festival, says she came to the festival looking for a shot of inspiration.

“I’m always searching for inspiration,” Ouellette says. “I love the spiritual aspect of the classes here because it takes my mind off myself and focuses it toward helping others.”

Despite having dreams to see the Hanuman Festival begin take hold in other cities across the U.S., D’Ambrosio says the festival will continue to be held in Boulder in the future.

“I’ve never put on a festival before and even though there were hiccups and fires we had to put out, I do have a dream to have it expand into big cities,” she says. “But we will definitely continue to have it in Boulder.”

For more information on the Hanuman Festival, visit http://hanumanfestival.com/home.