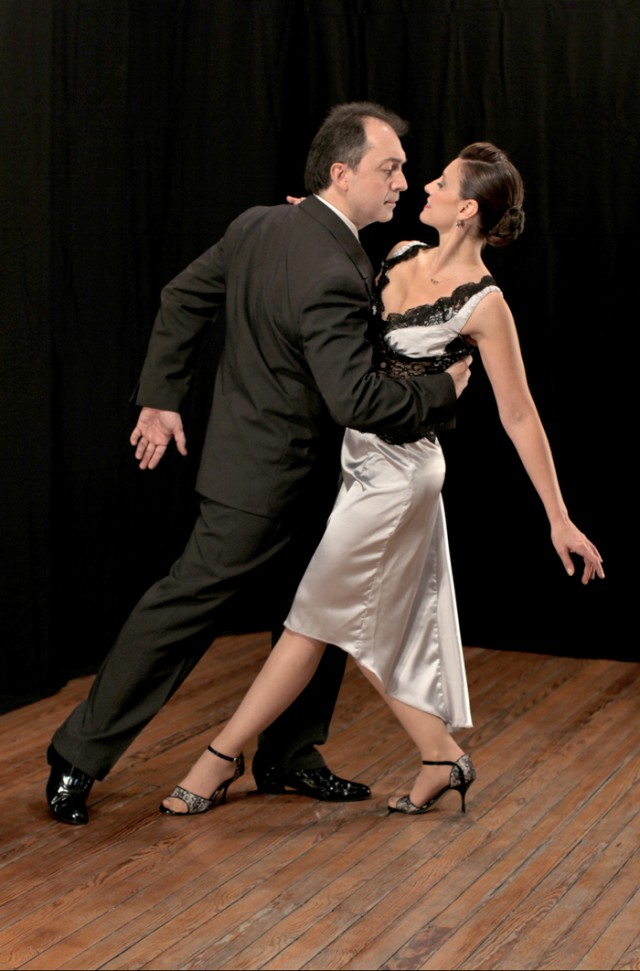 To hear a person talk about tango is to witness a blushing love affair. They’ll speak of the heart, of an unspoken connection between partners, of passion; they might even go so far as to call it an addiction. To hear tango dancers describe their art is to be a voyeur of smoldering intimacy, one that is only understood by those who are in on the secret.

And soon enough, Boulder, too, will be in on the secret of tango. Gustavo Naveira and Giselle Anne, professional tango dancers who teach workshops all over the world, will open the Boulder Tango Studio on Sept. 28.

The studio is currently under construction in the Avalon Ballroom, a space that is run by the Village Arts Coalition, at 6185 Arapahoe Ave. in Boulder. To establish a presence in Boulder before their studio opens, Naveira and Anne have brought in prominent tango couples Donato Juárez and Carolina del Rivero as well as Fernando Sanchez and Ariadna Naveira (Gustavo’s daughter), for a weekend of workshops, practicas, milongas and performances this upcoming weekend, from July 12 to 14.

The event, called Yunta Brava, will take place at the Avalon Ballroom.

“Both are internationally ranked couples,” Naveira says. “They could be two of the best tango couples of the moment.”

Naveira says he and Anne have travelled to every continent but have chosen Boulder as the place to settle down and raise their young children, all the while teaching the passionate and improvisational dance to the Boulder community.

“Boulder is a kind of paradise. It’s one of the best places in the world. Very different from other United States cities,” Anne says.

The Argentinean couple has been dancing together for 20 years after meeting at a tango festival in Sitges, Spain.

According to Naveira and Anne, the studio will feature classes throughout the week as well as a number of three-day weekend seminars. They will also host Friday evening practicas and Saturday night milongas, which are group dances that require couples to maneuver around one another on the dance floor.

A milonga is essential to the community aspect of tango, and is a tradition that evolved in the late 19th century in Buenos Aires. Naveira likens the history of tango in Argentina to that of jazz in the United States.

“The golden age of tango in the ’40s and ’50s was full of artists, musicians and singers,” he says. “However, one of the problems is that the dance doesn’t have documentation, only from the 1930s on. There is not documentation to prove how the dance developed to what we have now. It is very difficult to study the dance.”

In response to this difficulty, Naveira and Anne have developed a comprehensive curriculum. The dancers have developed a series of specific moves to be taught in an almost academic program, similar to the step-by-step way in which ballet is taught.

“We are planning to do a very gradual development for someone who wants to learn to start from zero until they really get high-level,” he says. “Parallel to that we will have a program to train teachers. There will be three levels, and each level will take at least one year to complete. The training for the teachers will include going through all that knowledge.”

“It is said, and it’s absolutely true, that to dance tango is a very, very good moderate exercise,” Naveira says. “It’s good for the heart, and many doctors are recommending tango in Buenos Aires.”

But much of tango is not in the steps, the couple says.

“We don’t dance to choreography,” Anne says. “I think this is another aspect, to live a new experience each time you dance.”

“It’s magical what can happen,” she says. “It’s something that’s co-created with two people; one person is not responsible alone. And each person is making something unique each time.”

The dance relies on the chemistry between partners in creating the irreplaceable experience that Rich describes. Its textured variance, its unexpected lilts, its tendency to speed up and slow down simultaneously — these things are only achieved by a deep bond and bodily harmony between partners. Naveira and Anne’s dancing is both perfectly unified and seemingly unanticipated from moment to moment.

“There is no other dance that you can find something so strong, so intense. The whole dance is based on this connection. This creates an attraction and people become addicted,” Naveira says.

They hope that Boulderites will become equally infatuated with tango.

“We want more people to play with,” says Rich.