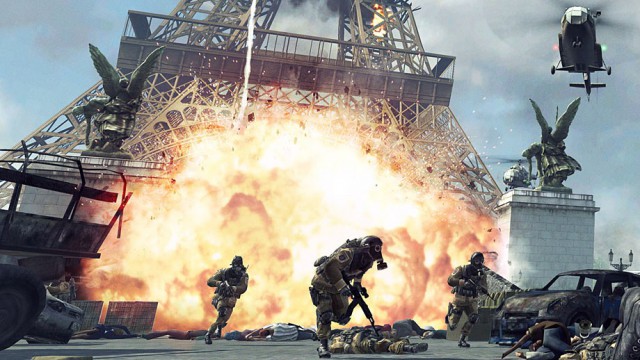 The drama surrounding Modern Warfare development studio Infinity
Ward and former studio heads’ beef with their bosses at Activision, and ultimately the firing of the studio heads, had fans
questioning if the quality of the Call of Duty spinoff would suffer. But with the game breaking sales records by selling 6.5
million copies of Call of Duty: Modern Warfare 3 within 24 hours of it being released, the back story
apparently didn’t matter. The Call of Duty franchise has cemented itself as an
unmovable bastion of the video game world similar to Mario, Madden and Zelda.
And Modern Warfare 3 backs it all up.

When we were last in the Modern Warfare world two
years ago, we were killing traitors, trying to save our people and finding out
where the hell Makarov was, the character who basically started World War 3.
While it’s a bit difficult to follow all the details of the story, your
missions are clear and concise and when you’re in the middle of the action, the
story doesn’t matter. You’re just trying to survive. Just like all of the Call
of Duty games, the firefights are intense, fast, loud and crazy. There are
bullets coming at you from every direction, enemies constantly trying to creep
up on you to catch you off guard and explosions going off everywhere you turn.

Good thing there are plenty of places to hide
behind while you do your best to take out enemies one by one. And the weapons?
There are just too many to count. On any given war-ridden street you can pick
up a variety assault rifles, sniper rifles, machines guns, shotguns, pistols
and even rocket grenade launchers. The controls are just as simple as previous games
with an easy targeting system, weapon switch out and usage and your movements
across environments. If anything, they’ve been tightened up.

Speaking of environments, although the game is
linear for the most part — you know, not much exploration — the design and look
of all the locations are superb. New York, London, Paris and Somalia are just
some of the locations you visit and do battle, and every place is gorgeous. I
mean, if you can find bombed out buildings and war-torn cities gorgeous. The
New York battle on the Hudson River, specifically is just fast-paced intense
eye-candy.

Of course the most popular portion of the Call of
Duty franchise is the multiplayer. The multiplayer is the deepest it’s ever
been. There’s a revamped reward system called Pointstreaks that give you
points, upgrades and unlocks for completing a variety of challenges. To put it
simply, it’s addictive. We don’t see you getting bored with this one anytime
soon.