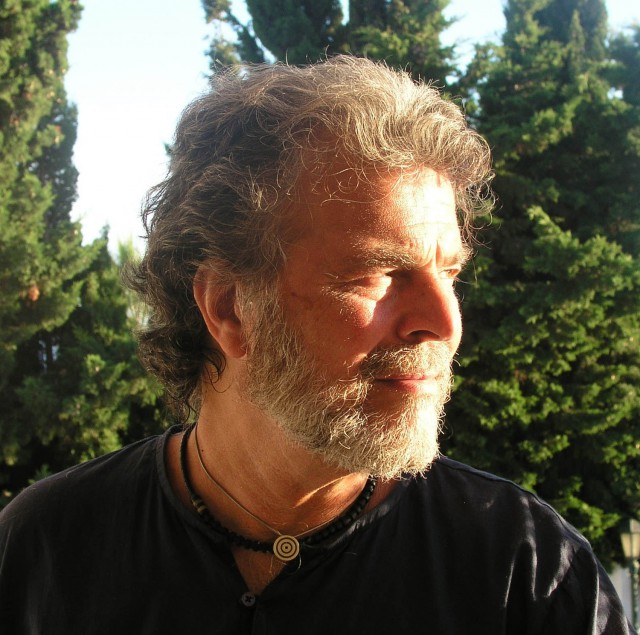 Robert Venosa, one of
the foremost masters of the visionary art movement, died on Tuesday, Aug. 9,
marking the end of an eight-year journey with cancer. He was 75.

Before Venosa started painting the luminous, transportive paintings he is now famous for, he lived a
plush life in New York, wearing hand-tailored clothing and working as a
commercial artist for his own advertising agency. When the ’60s rolled around,
Venosa realized that “materialism didn’t hold the final promise,” according his
wife, artist Martina Hoffman. Venosa closed his agency, sold his apartment, and
began a hippy lifestyle, living in a van, practicing yoga and pranayama, eating
a vegetarian diet, and experimenting with being “a holy man.”

His searching led him
to Europe, where he began studying with the fantastic realist painters Mati
Klarwein and Ernst Fuchs. Venosa took their tutelage very seriously,
transitioning from being a commercial artist who designed album covers to a
fine artist, depicting images of light and higher states of consciousness. The
path of his rich and varied life continued to bring him into contact with
legends of the creative world; his list of friends and acquaintances included
such names as Alan Watts, H.R. Giger, Timothy Leary and Miles Davis.

While in Europe, Venosa traveled to Cadaqués, a village on the coast of Spain, in hopes of meeting the great surrealist master Salvador Dalí. Venosa simply looked him up in the phonebook, and asked Dalí’s maid if he could speak to the maestro. Dalí picked up the phone; Venosa said that he wished to meet him. Dali brusquely asked, “Okay, are you beautiful?” When Venosa replied, “Yes,” Dalí said, “Well be at my house at seven o’clock.”

It was in Cadaqués that Venosa also met his wife and partner for 30 years, Hoffman.

“He was a painter of
the light; there was nobody like him in the whole visionary art family that was
able to capture the source the way he did,” Hoffman says. “He didn’t paint any
symbols that were associated with any religion. He just basically painted the
energy, and he did it so well. He took the classical tradition from Europe and
he brought it here, leaving us these gateways into the realms of the super-conscious.
That was his path on Earth.”

Venosa’s legacy will
endure not only in the scores of mystical paintings he created, but also with
the countless number of students that he shared his technique and passion with
over the course of his long career. Alongside Hoffman, Venosa had worked to
pass on centuries-old techniques to artists of all abilities during the
workshops they held across the world. As a teacher, he was patient and
encouraging, with a sharp eye for spotting opportunities for improvement.
Venosa taught his last workshop here in Boulder in the fall of 2010.

A student from that
workshop, Justin Kephart from Denver, reflects on his experience.

“I can’t really
express what a blessing that class was for me, what a blessing finding Venosa
was for me,” Kephart says. “I had never painted before; now I paint every
chance I get. Ayahuasca
Vision [one of Venosa’s
paintings] sits
aside my easel, always reminding me of what’s possible as I
struggle to overcome my own limitations in rendering my own vision.”

Venosa’s gift to the
world of painting was to project the direct and masterful translation of
spiritual planes, angelic visions and meditative states into the boundaries of
canvas and paint. The ripples of inspiration spreading forth from his work will
continue to expand and motivate those who have been touched by it.

“His transition
was graceful and accomplished in the same composed and calm manner that he
exuded throughout his life,” Hoffman says. “Even in death he gave those
surrounding him a powerful initiation into the scared mysteries of the unknown.
… We will carry him in our hearts forever, remembering the light he shone on so
many. %uFFFDHe so appreciated the light that others shone upon him.”

A “Memorial
Life Celebration” honoring Robert Venosa’s life and art will be held on Sunday, Aug. 21, from 3 p.m. to 5 p.m. at%uFFFD Boulder Events Center, 2805 Broadway. Boulder Events Center is across Balsam Street from Boulder Community Hospital. There will be an after-party at Tonic Herban Lounge at 2011 10th St.