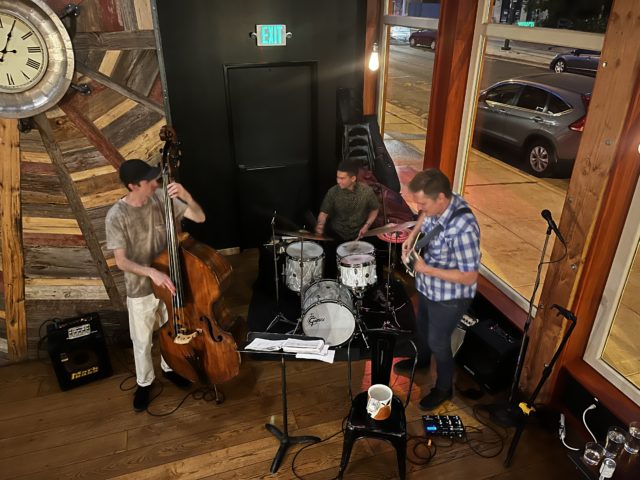 Anthony Lopiccolo is from Detroit, but as a jazz lover he appreciates the music’s deep history in the Five Points area of Denver. That made 2801 Welton St., a building that dates back to 1884, an auspicious place for Lopiccolo to open Goed Zuur, a restaurant that focuses on sour and lambic beers, meet-and-cheese boards and—since last fall—free concerts by some of Denver’s best jazz musicians.

“The history in Five Points was a huge reason why I wanted to open in the neighborhood,” Lopiccolo says. “It’s two-fold, really—because of the jazz history here and me always having been passionate about jazz music, especially because of how awesome the jazz scene is in Detroit, and listening to jazz with my dad growing up. Opening in Denver’s only historical African American neighborhood was also a big thing for me. Everything was either a bar or a café or closed, and I wanted to try to do something new.”

Goed Zuur, which means “good acid” in Dutch, was inspired by a trip Lopiccolo took to Belgium. It has a full menu on top of its lauded meet-and-cheese boards, and the restaurant also features organic wines, a cocktail menu and, of course, incredible beers you’re unlikely to find anywhere else.

“There isn’t any place like what we have,” says Lopiccolo, who boasts that Goed Zuur is the only tap house that focuses solely on sour/lambic beers. “It’s really the Belgian style that was the big inspiration for our tap list, and that’s what we’ve been driving for.”

Though it’s only been open for five years, Goed Zuur is more well-known outside Colorado than in the Denver area, and won Imbibe Magazine’s 2018 award for Best Beer Bar in America. Goed Zuur creates collaboration beers with a number of breweries, and puts out an acid jazz series every year for the Five Points Jazz Festival. Lopiccolo says the restaurant also creates collaboration cheeses with Vermont-based Parish Hill Creamery, and generally tries “to be as involved as we can with producers we’re passionate about.”

The same goes for the jazz Goed Zuur features every Thursday, as well as every first Friday, according to local guitarist Cole Rudy, who plays in the blues-rock band Dragondeer and curates Goed Zuur’s musical menu.

“They go through a lot of painstaking effort to make what they have stand out, to not only be high-quality but also make sure every ingredient has a story behind it, a relationship behind it,” Rudy explains. “Anthony [Lopiccolo] wanted someone to be able to sort of direct the music portion of their business to reflect the same thing as their food. I talk with every artist I book about that, because I want it to match the quality and the effort that goes into every other little bit of that establishment. It’s the opposite of the corporate vibe.”

Five Points is growing and changing like so many Denver neighborhoods, for better or worse, and Rudy has a unique perspective because he also ran the Meadowlark’s jazz series at one point and saw RiNo transform around it. He has also lived in Five Points several times and wants to preserve what’s great about it.

“My personal goal, and what I’m grateful to get to do, is to bring in music that reflects the heritage and culture that is Five Points and Denver. We want to uphold that tradition. Anthony and I both have a hardcore love for that neighborhood, and I’m just as scared of gentrification as everybody else. That is a classic stretch of Denver and it’s one of the last untainted parts of the city proper, and my hope is that when it does happen the business owners and residents can come together and really keep the vibe of the original neighborhood there.

“The list of people who’ve played there goes on and on—Miles Davis, Charlie Parker, Dizzy Gillespie,” Rudy says. “I think Goed Zuur fits in really well because they’re not a franchise or a chain; they’re not just another W Hotel bar.”
Rudy often plays Goed Zuur’s jazz nights himself, and he’s having a blast bringing in not only some of the best Denver jazz musicians (Gabe Mervine, Hunter Roberts, Taylor Clay, etc.) but heavyweights from Europe and New York City, including Downbeat award-winner Rico Jones.

Rudy and Lopiccolo both say that building a reputation for a Belgium-inspired bar, restaurant and jazz club in Five Points has been slow-going and, at times, awkward, but they’re committed to showing the neighborhood Goed Zuur is something special.

“I think if some of the older folks that have lived in the neighborhood a long time actually gave us a chance they could see how great of a jazz thing we’ve started,” Lopiccolo insists. “We don’t really get people in the neighborhood that come in for the music, which seems silly because it’s free; it’s there. We’re kind of one of the only white-owned businesses in the neighborhood and I’m sure that has something to do with it. The housing market is nuts, too, and I’m sure people have had to tighten up on their budgets. We get more love out of the country—from London and Japan and Belgium—than in our own neighborhood.”

As for the music itself, Lopiccolo says, “The level of talent that’s being curated [by Rudy] has been phenomenal but, just because we’re not marked as a jazz club, it doesn’t seem to catch wind fast enough. These guys are selling out Dazzle and then it’s hard to get 20 people to come in here to see them play for free. There is a jazz scene in Denver that’s more than a couple of places that we always think of. It’s growing.”