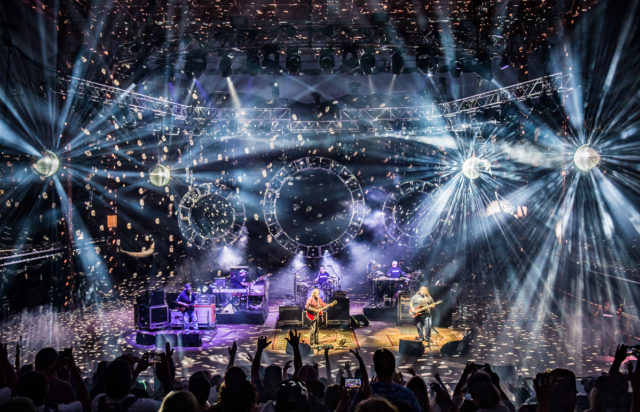 When Widespread Panic takes the stage at Red Rocks this weekend for a three-night run of shows, it will mark the Athens, Georgia-bred band’s 66th consecutive sold out show at the venue over the course of more than 30 years—the most shows any band has played at the storied amphitheater.

“It is a scene to be seen,” says Domingo “Sunny” Ortiz, the band’s percussionist. “[The fanbase] is a big, intricate part of this monster that we are part of. They’re kind of monsters themselves … our fans have watched us grow, and have grown with us, you know, so they are a big part of this circle. I know families that are in the second and third generation of fans.”

Although the respect and gratitude that the band feels for this intensely devoted fan base is obvious, Widespread Panic is committed to giving back to their community, as well as the audience. They’ve created and supported a long list of charitable organizations throughout the years, including Tunes for Tots, Nucci’s Space, Hannah’s Buddies, and Drumming for Success.

“With Tunes for Tots, since we started it in 2005, we’ve raised around $3 million for the arts, for music, and the arts, for schools in Georgia and other parts of the U.S.,” Ortiz says, “but, again, it’s all because of the fans, the fans are the ones that create that movement that make that happen—we just happen to be a part of that element.”

Panic’s evolution and ever-growing success are also due, in part, to the universal life-long passion for music they all share. Since he began playing drums in 1964 at the age of 12, Ortiz has been always committed to a constant learning process, persistently seeking ways to develop and hone his craft. He speaks of waiting outside of concerts as a youth on many occasions, just to ask the drummer a burning question about their technique, and of sleeping in bed with his drum at age 17 to cultivate a stronger connection. It seems as though he was successful in that cultivation; it is this devotion and fervor for music that unifies and propels the group as a whole.

Ortiz has been previously quoted as saying that he and Todd Nance, the original drummer, “became one” onstage. Ortiz expands, saying, “It’s non-verbal communication, to where we were actually conversing with one another. I think most percussionists will tell you, we try to complement everything else. We try to look at the big picture, so to speak, and focus on complementing the arrangement of the song.   I think the emotion is all part of the connectivity of making it sound as if it’s one. It’s just like breathing in and out, in and out. How you breathe is a big part of, believe it or not, our syncopation.”

In an age where music piracy is a serious problem for artists and fans alike, Widespread Panic has chosen to make music more accessible to the fans that promote, support, and sustain it. To date, almost 7 million songs/files have been downloaded through LiveWidespreadPanic.com, the band’s free access site to archives of their live music. This unique business model, wherein live concerts and not album sales drive the band’s revenue, has been profiled and lauded by Forbes, Wall Street Journal, and the New York Times.

In 1990, Widespread consisted of Michael Houser on lead guitar, John Bell on rhythm guitar and vocals, Dave Schools on bass, and Todd Nance and Ortiz as drummer and percussionist. An honorable mention must be given to producer John Keane, who has been there from day one, and who Ortiz calls the “unsung hero.” Keane remixed and remastered the band’s most recent release, Miss Kitty’s Lounge (May 2022). It’s the 14-song compilation of demos that ultimately led to the group’s first record deal with Capricorn Records in 1990. After completing the ensemble with keyboardist Jojo Herman in 1992, fate has altered the band’s lineup a bit over the years. Michael Houser and Todd Nance have since passed and are now replaced by Jimmy Herring and Duane Trucks.

“With Mikey and Todd,” Ortiz says, “the best way of how we can keep that dream moving is by showing our appreciation, using our own representation of what their music meant to us or their donation to society or to the music world.”