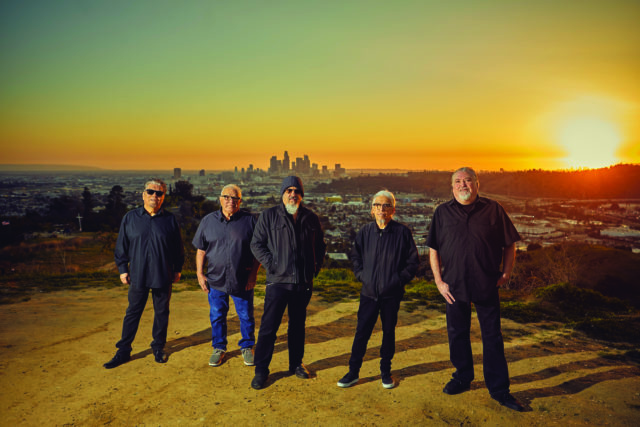 It could be argued that Los Lobos is American music’s Statue of Liberty—a genuine melting pot of rock ‘n’ roll, folk, traditional Mexican music and even punk rock; 50 years with its core original members intact; and a never-ending quest to create exceptional and relevant original music rather than rest on its beloved catalog.

According to co-founder Louie Pérez, the American tradition of democracy is a Los Lobos keystone as well.

“For the last 48 years,” Pérez says, “we respond to other band members’ requests for anything, even if it’s, ‘Hey, can we pull over for a second? I need to run in here.’ We don’t question it. If it’s worth it for you to ask, it means something. Maybe it’s a tribal way of operating—I dunno.”

The new Los Lobos album, Native Sons, is a collection of songs from classic Los Angeles artists Pérez and his bandmates cherish, from the Beach Boys and Buffalo Springfield to the Blasters, and democracy played a big part in the song selection.

“Well, much like the way the Lobos universe operates, [bassist] Conrad [Lozano] said, ‘Let’s do “Sail On, Sailor.” It’s one of my favorite songs.’ And we said, ‘OK.’ And that was it. That’s how we’ve always operated. It’s a form of democracy, and respect for each other as friends. We started this band as friends; we were friends before we even had a band. We have roots. This band didn’t come together through classified ads.”

In fact, Los Lobos had been a unit for a decade before releasing its first proper album, 1984’s How Will the Wolf Survive?, on proto-alternative label Slash Records. The four core Lobos—Pérez; Lozano; and singer-guitarists David Hidalgo and Cesar Rosas—met at Garfield High School in Los Angeles. After getting into music via rock ‘n’ roll, they made a living as Lobos Lobos in the 1970s playing traditional Mexican music at countless weddings and parties before being integrated into the legendary L.A. punk scene that included bands like Black Flag, X and the Blasters (from which Los Lobos lifted multi-instrumentalist Steve Berlin). Eventually Los Lobos was opening for groups like the Clash, U2 and the Grateful Dead on its way to becoming one of the most respected recording and performing acts in the world.

When Los Lobos became a household name in 1987 with its cover of “La Bamba,” Pérez was introduced to millions of MTV viewers as a drummer.

“That’s, like, punk rock all the way,” Pérez—who these days usually plays a jarana on stage—says when asked about phasing in and out of being Los Lobos’ full-time drummer.

“Punk rock bands back then, they literally would figure out what instrument they were gonna play on the way to the gig. We needed a drummer and I had always fooled around with it. In 1980, when we became an electric band full-time after having been together for about 10 years, we needed a drummer, so we made one. I became a drummer all through those first years of the band’s touring, all the way through ‘La Bamba.’ But by the time we were recording, in the studio I didn’t play much drums. I left that to the pros.”

“Our songs got more complicated rhythmically,” Pérez explains, “and as a songwriter I wanted to hear those songs the way they should sound and give them the musicality that they needed. I showed up to rehearsal and strapped on a guitar and that was it. I just got back to playing guitar again. I never felt weird about that, because it didn’t feel like I was being replaced. I replaced myself. I was the one that said, ‘This is the way we should go.’”

“I’ve had the strangest career,” Pérez muses, “starting off as a guitar player, then going from playing electric rock ‘n’ roll to playing traditional Mexican instruments to being a drummer, and going back to playing guitar again, and I think my guitar playing is, like, in arrested development. When I play guitar it’s like when I was playing in the early ’70s. It’s OK—it just makes for a strange musical career.”

That strange career has brought Pérez—whose mother, born in Mexico, actually lived in Greeley for a time before winding up in California—through Boulder, Denver and Fort Collins many times since Los Lobos finally hit the road in the early ’80s.

“We traveled through the U.S. and there were certain places that resonated,” he says. “Colorado did because of the natural beauty, the physical beauty of it, and the scene that was going on there. It was a cool place to be. We have such a history of playing Chautauqua—the barn—and some of the joints back in Denver and the mountain communities. Colorado has always been a mainstay for us, and one of my best friends grew up in Boulder. I remember Pearl Street before it was really a mecca for tourism. I remember the radio station above a camera store, and the Tibetan store of course. It does mean a lot.”

Pérez says he was kicked out of parochial school because “someone decided to stick 165 joints in a rubber band in my locker,” and that twist of fate—ending up at Garfield High School—resulted in Los Lobos forming and Pérez spending most of his life writing lyrics for former Garfield classmate David Hidalgo to put music to and sing. The Los Lobos classic “Saint Behind the Glass” is the only song Pérez is known for singing.

“I’m in a band with two of the greatest vocalists in rock ‘n’ roll, as far as I’m concerned,” he says. “I’d much rather have David sing these songs. He’s a great interpreter of songs; in the tradition of, like, Sinatra, he can take a lyric and just turn it into something. He takes a lyric and gets inspired in a way that when he sings it, it’s incredible. Plus, we’ve been writing songs together for 50 years, so that helps out a little bit.”

“‘Saint Behind the Glass’ happened because they chased me around the block a few times and found me hiding underneath a car and made me sing it,” Pérez adds. “I meant that one not for me. When I write songs, I can hear David singing, and so when I sit down and write I have to believe that David is going to sing it. I’ve got to believe, ‘David would say this in a conversation.’ That’s how I go about that. That’s how it works.”

Near the end of our conversation, I felt compelled to admit to Pérez that as a kid in Pittsburgh, seeing Los Lobos on MTV was my introduction to Latino culture, and that the lyrics he wrote for “Good Morning, Aztlan” inspired me to study Aztec history. It was a long way of asking Pérez something I’ve always been curious about: how Latin America perceives Los Lobos.

“That’s really great, and it was the byproduct of what we’ve done, the fact that we can demystify what the Mexican-American experience is and open the door to maybe looking at Mexico and all of those things,” Pérez says. “I’m not going to say that we were messiahs when it comes to that, but up to that point the only reference point anybody had to Mexicans and Mexican-Americans was some movie about street gangs or some old cowboy movie with banditos, so I’m kind of proud to say we were part of the solution, part of the demystifying.”

“At the same time, for the longest time, Mexico didn’t look too fondly at Mexican Americans. Like, ‘Where are you from? Are you Mexican or are you American?’ There was pushback for a long time. Young people in Mexico are now very fond of Chicano culture, and it took a few generations for that to happen. From the first shows we played in Mexico that weren’t very well-attended to going and having 5,000 people in a plaza there for us, things have changed considerably. It really means a lot to be able to change things here in the U.S. and it means a lot for us to be respected by Latina America in general.”

Despite that respect in the Americas as well as around the globe, Los Lobos has yet to be inducted into the Rock and Roll Hall of Fame, despite being nominated—and despite the induction of some bands that might have much higher record sales but not nearly the relevance, influence, longevity or critical acclaim.

“We operate as an American band with Mexican roots,” Pérez says. “I think we’re proud of both things. We’re 20 months away from our 50th anniversary. People are starting to say, ‘It doesn’t look like these guys are going anywhere.’”