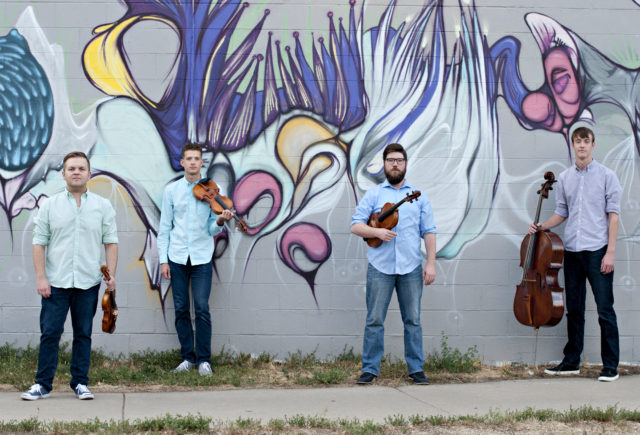 The Altius Quartet is on the move.

Formerly quartet-in-residence with CU’s esteemed Takács Quartet, Altius has found themselves very busy, building their already-blossoming career. Since completing the residency, the group — comprising Andrew Giordano and Joshua Ulrich, violin, Andrew Krimm, viola, and Zachary Reaves, cello — has kept Colorado as their home base while recording two albums, taking a trip to Beijing to collaborate with composer Bright Sheng, completing a tour of California and giving other performances in Boulder and elsewhere.

A major work on the Jan. 21-22 program is taken from Altius’s recent album by Shostakovich, the personal and darkly expressive String Quartet No. 8. Written in a time of despair for the composer, it is dedicated “to the victims of fascism and war,” but it is above all a reflection of Shostakovich’s own bleak thoughts at the time.

As daunting as the Shostakovich 8th Quartet is for many players and listeners, Reaves says he finds the music very comfortable. As the son of professional musicians, “that was music I had grown up hearing,” he says. “I was around [music by Shostakovich] pretty much all of my life.

“I know for some people Shostakovich is a little bit too out there, but I’ve found that if you give it the right context, it goes over well with audiences.” To that end, he says, the quartet will talk about the piece before playing it.

Stretching from the 18th to the 21st centuries, the music in the concert comes from four very different times.

“Art and music always reflect the lifetimes they were written in,” says Reaves. “It was easy for Haydn to sound light and chipper, because he’s writing for his environment [at] the Esterhazy Palace. Mendelssohn is writing very much for himself — he’s always wearing his heart on his sleeve.

“In the case of Shostakovich, the world in the 20th century is becoming much more global. We’re talking about World War II. He was in the middle of it and experienced so many horrible things. I always say it would be inappropriate for Shostakovich to write like Haydn, because that wouldn’t reflect the time that he lived in.”

The newest piece is JP Merz’s Through Fog, which the Altius Quartet has played on many of their programs, including the concert at Carnegie Hall. After the CU premiere, the composer revised the score for Altius’s players.

“We wanted to play this piece because we’ve played it a lot, but also because JP was a graduate student at CU,” Reaves says.

The three concerts the Takács Quartet will play later in the spring feature CU faculty members as guest performers.

“The college of music feels like a family” Karoly Schranz, the quartet’s second violinist, says. “We have such a close connection with the faculty, it’s always a great feeling to play with them.”

For the concerts Feb. 4-5, tenor Matthew Chellis and pianist Andrew Cooperstock will join the Takács, who will perform Vaughan Williams’s Four Hymns for tenor, viola and piano with the quartet’s violist, Geraldine Walther. They will play a Mozart quartet, and with Cooperstock the Quintet No. 2 for piano and strings by Hungarian composer Ernó Dohnányi.

On March 11-12 the guest artist will be guitarist Nicolò Spera playing music by Boccherini and Castelnuovo-Tedesco. Also on that program are another Mozart quartet, and the only Beethoven to be heard this spring, the Quartet in C-sharp minor, Op. 131.

The Takács season ends April 29-30, when violist Erika Eckert and cellist David Requiro come on board for Tchaikovsky’s String Sextet, “Souvenir de Florence,” a work that the Takács has never played before. Also new to the Takács will be Dohnányi’s String Quartet No. 2 in D-flat major. Filling out that program will be the Shostakovich Quartet No. 11.

On the Bill:
Altius Quartet