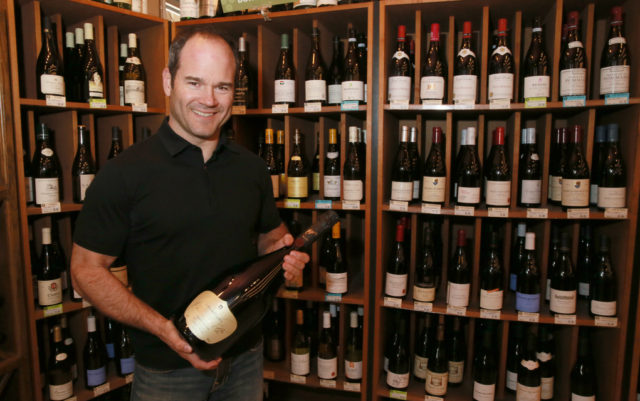 “To succeed — it’s got to be from the moment you decide you’re going to do it until the end — you have to be relentless with your pursuit,” says Brett Zimmerman on the patio of his wine shop, Boulder Wine Merchant. He’s talking about what it took to pass the series of courses required to become a Master Sommelier (MS). There are only 150 or so in the U.S., and though Zimmerman says the exams —  which the Court of Master Sommeliers developed to test one’s ability in wine service, knowledge and blind tasting — are challenging, it’s the years of adjusting one’s life that makes becoming an MS so difficult.

“You have to basically change your lifestyle,” Zimmerman says. “If you’re used to getting up and hanging out, reading the newspaper… no, no, no, you have to get up in the morning, you’ve got to devote X amount of time in the morning. When you’re done with your [work] shift, yeah, everyone’s going out to get a beer, you have to be like, ‘No, I’m going to go home and study for another couple hours.’ You have to do that not just for one week, you have to literally do it until you pass the exam. So seven, eight, nine, 10 years, however long it takes to do that. You incorporate blind tasting for two, three, four days a week for 10 years. But you can’t just turn it on and off, you have to be dedicated.”

Zimmerman says the only thing that can sustain someone through the examination process is passion. If you’re not committed to passing the exam, and prepared to bounce back from failure, you simply won’t pass the last of four parts necessary to receive the MS designation.

Zimmerman knew early that he wanted to pursue a career in food and wine, and with a few fortunate experiences and people dropping into his life, he’s built about as well-rounded a career in wine as one can. It started in Boulder (where, by the way, Zimmerman was born at the hospital across the street from Boulder Wine Merchant). He went to business school at the University of Colorado while working at Laudisio’s and Flagstaff House, two fine dining establishments that have staked their reputations on excellent service and great wine programs.

The allure of what Zimmerman calls “the theater of service” was enchanting, and appealed more to him than a pursuit in finance, which is what his friends and peers were undertaking.

“I kept finding myself being most passionate about food and wine and beverage service, so when I was getting close to graduating, basically … all my buddies were going to work for Bear Stearns, for JP Morgan, and I was like, ‘You know what, I’m putting myself to sleep just thinking about it.’”

Zimmerman chose passion over money. He chose to know wine through the pursuit of knowing everything about it, as opposed to making a high salary and dropping it on fancy bottles at top restaurants. If he had any doubts about his choice, he had plenty of opportunities to see the other side while working at Chicago’s Charlie Trotter’s, where guests flocked to experience the restaurant’s trendsetting wine program. He saw it working in Michael Mina’s high-end restaurants in San Francisco, where Zimmerman felt like he “was kind of swimming upstream while everyone was riding the wave of the dot-com boom.”

“I was one of the remaining people working in the restaurant business. People were like, ‘What are you doing, man? You can make $5 million doing this, that or the other thing, and I was like, ‘That’s just not my thing,’” he says.

He saw it launching restaurants at the Bellagio, where high-stakes gamblers might spend up to $60,000 on wine on any given night.

And yet, he didn’t flinch. He came back to Boulder after his nationwide apprenticeship, and crossed paths with Bobby Stuckey, who was on the precipice of achieving his MS pin and opening Frasca. Tasting wines every Saturday with Stuckey solidified Zimmerman’s decision to take the two remaining MS courses. He had amassed a varied and impressive catalog of experiences, was launching the restaurant Mateo with Chef Matthew Jansen, and had the invaluable resource of access to several Master Sommeliers — not only Stuckey, but Sally Mohr and Wayne Belding, from whom he would eventually buy Boulder Wine Merchant; Jay Fletcher in Aspen, and wine experts at The Little Nell, also in Aspen.

Mentorship, Zimmerman says, is a linchpin of the MS program; those who have gone before know the unique challenge the program presents.

“I would say we all share the common bond of sacrifice,” Zimmerman says of the MS community. “To get through the Master exam or Advanced exam, at some level you will experience failure. You will. Period. Everybody has. Some more than others. But it’s humbling — that beat-down you take, the fact you just have to redouble your efforts time and time again and get back up on the saddle and be like, ‘You got to do this again.’”

Ultimately, Zimmerman has proven that he made the right choice to follow his passion. His hands are still in a number of arenas, including consulting for a beverage company, development of a canned cocktail, running the Boulder Burgundy Festival (now in its eighth year) and, of course, operating Boulder Wine Merchant. Zimmerman knew that simply passing the MS exam was useless, both personally and for the wine-drinking community, if he didn’t utilize the information he had gathered.

“You don’t just get through the [MS] exam, it’s not like the draft, like, ‘OK, I’m going to sign this $500 million contract. Like any industry, you’re only useful if you’re a good employee. If you have all this knowledge and you pass the exam but you’re a train wreck of an employee, you’re going to be hard to employ,” he says.

That’s an attitude we in Boulder County benefit from. To have access to the knowledge of an MS via Boulder Wine Merchant, without the barrier to entry that a fine dining establishment possesses, is a rarity — Zimmerman estimates only five or six other wine shops in the country are operated by Master Sommeliers. But Zimmerman says he gets more out of it himself because he’s able to share the world of wine with a much more diverse community.

“When it’s all said and done, the connection to the community is what’s so important. When I bought this store, I didn’t want to sit in back and run an online store, grabbing warehouse space in East Boulder and sitting behind a computer,” he says.

Zimmerman says people come into the shop often to see him, and cull information and buying tips, just as they would ask for Stuckey or any other MS in a restaurant. But providing wine at various price points, from small producers all over the world, is where Zimmerman says the value of his store is most evident.

“Anybody can spend $50 on a bottle of wine and have it be good. The reality is we spend most of our time going through and kissing a lot of frogs before finding the princes when it comes to that under-$10, under-$15 category on the shelf,” he says.

But that effort has been worth it; to be able to go in and grab a monthly special bottle of wine from an artisan producer for under $10 that’s been vetted by an MS is spectacular. Zimmerman says he tastes up to 100 wines a day to curate his store. It also helps him curate his own wine cellar, which he says has grown so big, he’s “got a problem.”

The real problem, though, might be deciding what to pull out and drink. We’ve got Zimmerman, but where does he turn when he needs some inspiration?

“I think wine drinking for me is kind of like a wardrobe,” he says. “Take a look outside and decide how you’re feeling, what are you cooking, what’s the weather like, what’s the time of year, those kinds of things make the decision easier.”