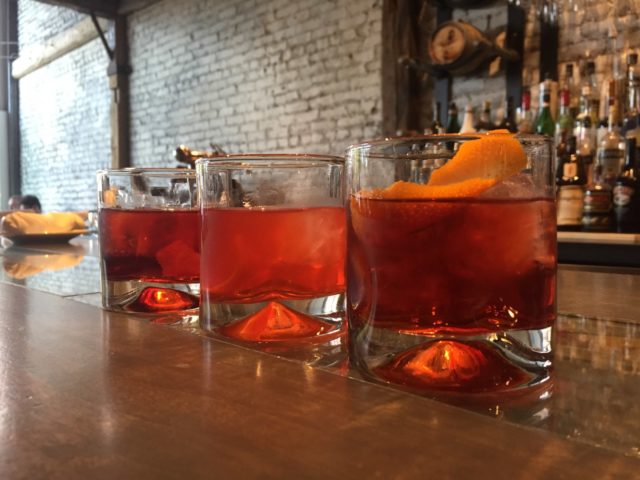 In the Olympic sport of hammer throw, bulky men and women grip a handle, which is attached to a steel wire with a heavy metal ball at the end of it, and torque their bodies into quick pirouettes. The speed propels the “hammer” into motion, and at the end of a few revolutions, the athlete releases the hammer and hopes it flies far.

The success of the hammer thrower comes down to speed, strength and technique, which makes it an easy analogy to Mike Milakovic, a former hammer thrower and Olympic hopeful, who now mixes and slings artisan Manhattans and negronis at Boulder’s Wild Standard.

The journey that led Milakovic from college athlete to cocktail artist at Wild Standard has been as circuitous as a hammer thrower’s approach, too. Milakovic grew up playing football in Indiana before joining the college team at Ball State University. It turned out, though, that the college game wasn’t for him.

“So my coach said you should walk on the track team and go throw the hammer and see if you like it. And I like sports, I love being active, so I was like, ‘Cool,’” Milakovic says. “I tried out for the team and broke all the school records. I’ve always had a passion for the Olympics since I was a kid watching downhill skier Bill Johnson win in ’84, so I kind of thought that might be my sport.”

“I thought I trained hard until I went to Hungary, and they’re just monsters. Kids are 12, 13 years old, they’re out there six hours a day,” Milakovic says.

He came close to making the Olympic team, gaining entry into qualifiers and making the top-15 in the world a few times. But, ultimately, after 10 years chasing the Olympic dream, standing on a podium was out of reach.

“I lived the Olympic dream, I never achieved my goal, but I lived my dream,” Milakovic says.

He coached for a few years, but in the end learned, “There’s not a lot of money in hammer throwing, [even] in the Olympics if you do make it. When my days of being a hammer thrower were done, I was like, ‘I’m good.’”

But being exposed to other cultures, particularly Hungary’s, allowed Milakovic the opportunity to taste and experience cuisines outside of the U.S., despite an Olympic training regiment that certainly forced him to watch what he ate.

“I absolutely indulged as much as I possibly could,” Milakovic says. “I remember being in Austria and getting my first wienerschnitzel, a big, huge piece of fried meat. Most of the food in Hungary was pretty unhealthy. I did the best that I could. When we did go out to eat, well we’re training 40 hours a week, what could it hurt?”

Milakovic was also able to sample Hungarian wines, which he calls “phenomenal.” When he started working at Wild Standard, he found the bar stocked with unicum, a traditional plum liquor that tastes a little like Jagermeister.

“I remember drinking a little too much of that when I lived in Hungary,” Milakovic says.

Eventually, Milakovic was able to find a balance between his old passion for athletics and his new passion for food. He launched a health food company, Mike’s Mighty Snacks, which sold kale chips and broccoli crunchers, after finding the people he was helping coach needed a healthier snack.

“I was challenged by my clients to figure out if you take all that [bad] stuff out of food, how’s it going to taste good?” he says.

He’s taking the summer to find new snacks to launch in the future.

When he started working at Wild Standard about a year ago, he found a chef, Bradford Heap, who shared a commitment to serving healthy food with his belief in responsible ingredient sourcing and elevation of plant-based menu items. That extends to Milakovic’s bar, where he serves as bar manager, generating menu items and mixing drinks himself, even though alcohol and health wouldn’t seem like they go together.

“At Wild Standard, my mission has been to create a new drink menu that falls more into not using the refined sugars and syrups. Most of the syrups are maple or honey, monk fruit. It brings more of a healthier twist,” Milakovic says. “I’ve always looked for places like Wild Standard that are more on the healthier side.”

Still, he acknowledges that alcohol is alcohol, no matter what you add into it.

“A friend likes to joke with me, ‘You use organic vodka because you don’t like toxins even when they’re toxins,’” he says.

Now, Milakovich’s creations are on full display during Negroni Week, through June 10, an international celebration of the Italian cocktail, which also happens to benefit a multitude of charities. The negroni, which has seen a resurgence in popularity thanks to the craft beverage movement, consists, basically, of gin, vermouth rosso and campari, a liqueur which gives the drink its distinctive bitterness and red color. But it also leaves room for creativity.

“It’s one of those classic cocktails and you can kind of do some interchangeable things with it, which I think is the fun thing about it,” Milakovich says.

Milakovich is serving up negroni variations that switch in Four Roses bourbon and Cynar amaro; Vapor’s barrel-aged gin; and tequila and Gran Marnier. The potential variations of the cocktail are virtually limitless, as evidenced by Milakovich’s revisions, and he says there’s nothing he won’t try in the name of creativity.

“I mean as long as it’s made correctly and not thrown into a shaker and doing that whole thing with it,” Milakovich says. “I know there are kind of hard-and-fast rules about some cocktails, like Old Fashioneds and Manhattans. But to me, the aspect of bartending that I enjoy most is being able to interact with guests at the bar. ‘How can I make this cocktail for you?’ If they want to do a negroni with whatever, I’ll try to make it for them.”

For the athlete-turned-artisan, it’s fitting that adaptability is what he values most at his Wild Standard post.