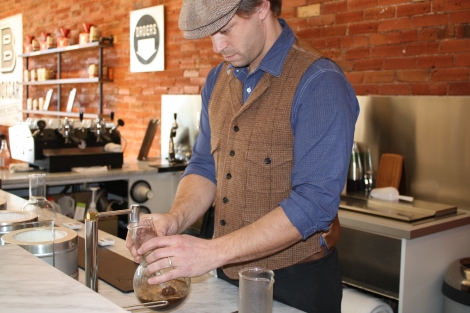 Safer than a pub crawl and more energetic than a wine tasting, next month Boulder will play host to an event sure to generate plenty of buzz among those in attendance.

The Caffeine Crawl grew out of a desire to give individuals an opportunity to learn, share and experience the passion of area coffee and tea houses. While enjoying a special taste of what these artisans are brewing up, patrons can interact on a personal level with those who experiment to give us more than our morning cup of joe.

Last summer the Caffeine Crawl made it to Denver as part of its nationwide tour. This year organizers are showcasing the Pearl Street scene and the vibrant caffeine culture percolating through the area. Stops on the tour include The Laughing Goat; Boxcar Coffee Roasters; Ozo Coffee; The Cup Espresso Café; and Piece, Love and Chocolate.

The tour will begin at 10:30 a.m. on Sept. 8 with groups of 20-25 people heading out to different establishments — to avoid diluting the experience by overcrowding. Guides will host each group, leading them through the tour and providing intimate knowledge of the establishments and caffeinated beverages along the way. Apropos of Boulder, the Pearl Street crawl will be the first true crawl on foot, after more sprawling forays into larger cities like St. Louis, Kansas City and Vancouver. The intimate layout will allow attendees to walk or bike the entire circuit, providing an excuse to burn off that excess energy.

At The Cup, the fair trade organic outfit with locally roasted coffee from Conscious Coffees and hand-crafted pastries and sandwiches, turning their amped-up customers on to new tastes goes hand in hand with their community-based philosophy. General Manager Adam Westlake supports the idea of a coffee house tour in the area.

“It’s always great when you can expand coffee knowledge into the world,” Westlake says. The Cup will be offering perhaps the most unique take on coffee when it serves crawlers their Japanese-inspired concoction.

“What we’re going to be representing is the Kyoto style of iced coffee popularized in Japan. It is a slow-drip process that takes about 10 hours to brew a little bit more than a liter of coffee,” Westlake says.

At about one drop every two seconds, The Cup will be working overtime to make more than their usual five cups per day of the syrupy racing fuel. As Westlake says, the slow-drip method makes for “a really clean, smooth, heavy-in-the-mouth, viscous coffee. It’s probably one of the more caffeinated things that we produce.”

Justin Hartman, owner and manager of Ozo Coffee, plans to use several different methods to brew a special espresso from a single origin farm somewhere in the world. Crawlers can then discern for themselves the subtle nuance each extraction method imparts on flavor.

“We’re excited to be a part of this event. We’re trying to take coffee to the next level,” Hartman says. By stopping in during the Crawl, participants can “learn how much of a craft roaster we really are, and how we take that science and art and combine the two in a café setting,” Hartman says.

One stop along the tour doesn’t necessarily serve coffee, unless you consider espresso truffles to be in the same category. Piece, Love and Chocolate might seem like a strange pairing for a caffeine crawl, but store owner and professional chocolatier Sarah Amorese seems to think the Caffeine Crawl is a good pairing for her creations.

“We’re a chocolate shop, and since we’re the only one on this particular Caffeine Crawl we feel that we have something original to offer,” Amorese says.

That something original has been around our hemisphere since before Europeans first arrived centuries ago.

The Caffeine Crawl is the brainchild of Kansas City-based The Lab. Aware of the parallels between the up-and-coming coffee craft industry and Colorado’s other booming beverage frontier, Crawl organizer Jason Burton cites the kinship that forms over a cup of coffee. In its second year of promoting these types of events all over the country, The Lab seeks to generate the same synergies between local businesses and the community that the craft brewing industry provides.

“Just like beer events, there’s a cool camaraderie that develops at these crawls, and it all stems from a love of coffee,” Burton says.

For those on the tour, a little marketing can go a long way — especially if within a passionate group.

“Obviously people are very devoted to their caffeine cause and their beverage love, so we’re hoping that it will bring some new people to our establishment who may not have otherwise come into our shop,” Amorese says.

Those who plan on taking the crawl Sept. 8 need to buy a $25 ticket, which covers entry into each establishment as well as samples of each location’s specialty that day. Participants will also receive a program, bottled water and a goodie bag of Boulder Crawl souvenirs. Tickets and information are available at www.caffeinecrawl.com.