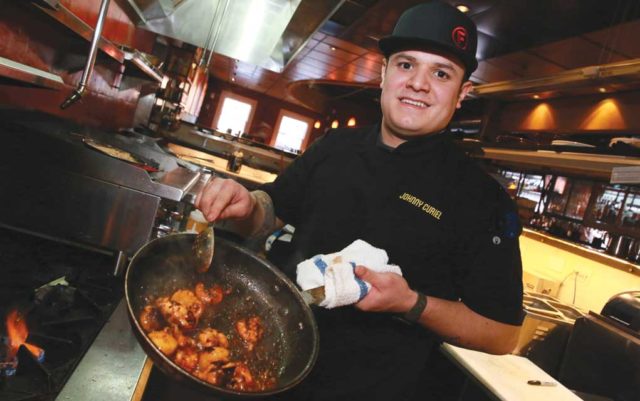 Johnny Curiel is the ideal candidate to bring real regional tastes of Mexico to Colorado, like grilled panela cheese with huitlacoche, corn gremolata and salsa macha.

Born in Guadalajara and raised in Breckenridge, he traveled and tasted in 29 Mexican states including Jalisco, Baja, Chihuahua, Veracruz, Yucatán and Oaxaca.

The one thing the new chef at Boulder’s Centro Mexican Kitchen didn’t encounter in Mexico were restaurants serving Mexican cuisine.

“Mexican food is not all enchiladas, burritos and tacos. If you go to Mexico, you find out that every region serves their own food style and they are very competitive,” Curiel says.

His roots are purely culinary. “Everybody in my family was a chef. When I was little I would come and hang in the kitchen. My father would seat me on a milk crate. All I saw all day was chopping, cleaning beef and cooking,” he says.

When Johnny was 12 the family moved from Guadalajara to Breckenridge to open a family-style Mexican grill. His father, John Curiel, wouldn’t let him work until he was 14. “My father had me start in the dish pit. He said I had to appreciate every job in the restaurant starting with the most important one,” Curiel says. When the chef recently had to let his dishwasher go at Centro, Curiel could be found washing dishes again.

Despite the kitchen lineage, his father didn’t want him to become a chef. “He wanted me to be able to do something else. I said: ‘No!’ I wanted to stick to what I really loved: cooking. I couldn’t imagine doing anything else,” Curiel says.

When he was 18, he announced he was going to travel through Mexico and cook. “I went there to really learn the cuisine and cooking traditions in different states. I took one class that was just on mole sauce. I tasted about 40 different kinds of mole,” he says.

Curiel eventually cooked for chef Richard Sandoval (of Tamayo and Zengo) and Troy Guard in Denver and jumped at the opportunity to work with the Big Red F restaurant group that includes Zolo Grill, Jax Fish House and Centro. 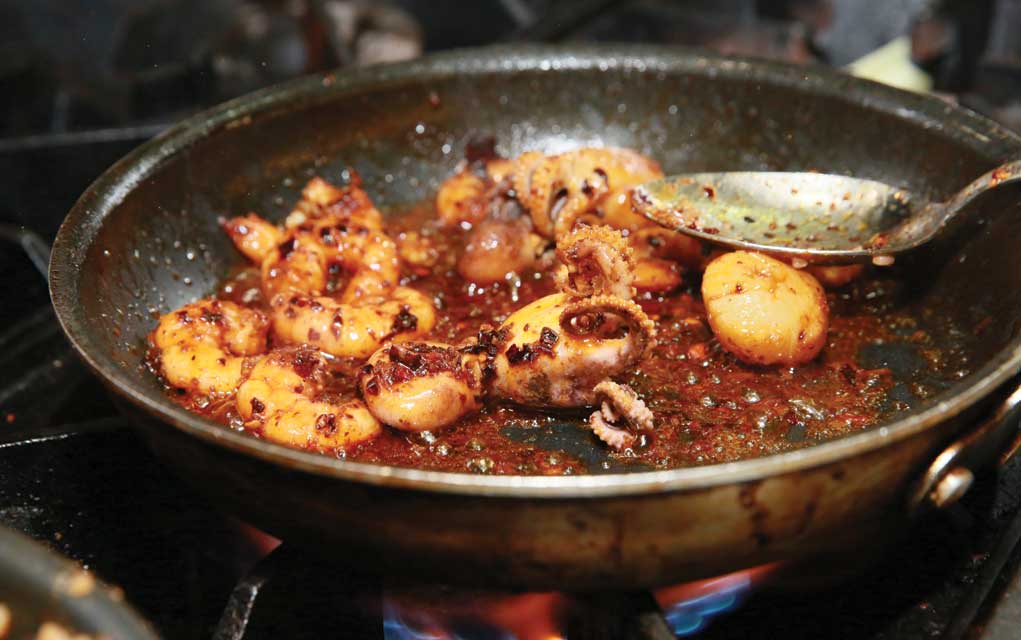 Given the opportunity to craft his own menu, Curiel curated a collection of regional specialties. “I wanted to bring the food I tasted [in Mexico] to Boulder, like the lamb tacos we used to get on Sundays. For our lamb tacos, we slow-roast lamb necks, pick off the meat and then braise [them] in vinegar with chilies and spices,” Curiel says.

Another traditional dish is Curiel’s hoja santa relleno: roasted sacred leaf stuffed with queso Oaxaca and queso fresco. “We bring up vegetables from Mexico — I work with a farmer there to get things like hoja santa, epazote and corn smut or huitlacoche,” Curiel says. The hoja santa or “sacred leaf” plant produces aromatic, velvety, heart-shaped leaves that taste a little like fennel or anise.

Centro’s “standard” Mexican items are not typical. The Oaxacan-style tamal is stuffed with chile rajas and queso fresco and wrapped in banana leaf. Smoked chicken and Oaxaca cheese fill enchiladas, sauced with salsa cruda. The knife and fork burro is stuffed with lamb barbacoa and Curiel’s mole negro.

“We have some sauces with only three ingredients including salt. The black mole has 38 ingredients,” he says.

Seafood preparations range from smoked fish salad with pickled onions and a poached egg to tumbada, a Yucatán dish with gulf shrimp and bay scallops, garlic and guajillo peppers to grilled seabream Zarandeado from coastal Nayarit, served with a hash of raddichio and Brussels sprouts and salsa verde.

Curiel says he is happily at home in Boulder.  “Unlike other places, people in the restaurant business here are part of a community, not a competition. Boulder diners are committed to eating healthy and are vegetarian, so I adapted some of the recipes. I made a vegan mole verde sauce that came out pretty good,” Curiel says.

When cooking Mexican cuisine at home, his advice is just to keep it simple. “It doesn’t have to have a dozen ingredients and squiggles of sauces. Get fresh produce and support the farmers. Roast fresh peppers. Griddle fry the corn tortillas. Do not buy ingredients in cans. Make it from scratch so you know what you are eating,” Curiel says.

The culinary research never stops. This month Curiel, along with chefs Dave Query and Jamey Fader, will cook a collaborative dinner at Jazamango restaurant in Todos Santos, Mexico.

Happy 30th anniversary to Ras Kassa’s Ethiopian Restaurant. Now in Boulder and Lafayette, the eatery originally opened as a cool roadside diner near Eldorado Springs. … The rustic Jamestown Mercantile hosts a Jan. 30 dinner featuring food and wine from Italy’s Alto Adige region with Master Sommelier Brett Zimmerman. On the menu: Baked fennel with radicchio-speck salad and beef filet with juniper red wine sauce. … The Chocolate Lovers Fling is 37 years old. I attended the first Flings as a chocolate dessert judge. This year’s Fling, Feb. 3 at the Omni Interlocken Hotel, includes a chocolate tasting, auction, dinner and dancing. The Flings have raised more than $3.6 million to support domestic violence prevention. safehousealliance.org. … Planning on joining a local CSA this summer? Meet the farmers and sign up at the CSA Fair sponsored by the Boulder County Farmers Markets Feb. 12 at the Rayback Collective. bcfm.org. (Plan ahead: The first Saturday farmers market is April 7.)

We loved the fried egg BLT with avocado, greens and aioli at BRU in east Boulder, and a hoagie layered with soppressata, salami, mortadella and provolone paired well with BRU’s Beezel Belgian-style Golden Strong Ale. My favorite taste was the simple, true sourdough bread the kitchen bakes in huge rounds in the wood-fired oven. Big chewy slices are served toasted and buttered.

“A spokesman later said egg custard tarts had proved the best for throwing, because they were deep and large, while lemon meringue pies held together well during flight.” —BBC News.