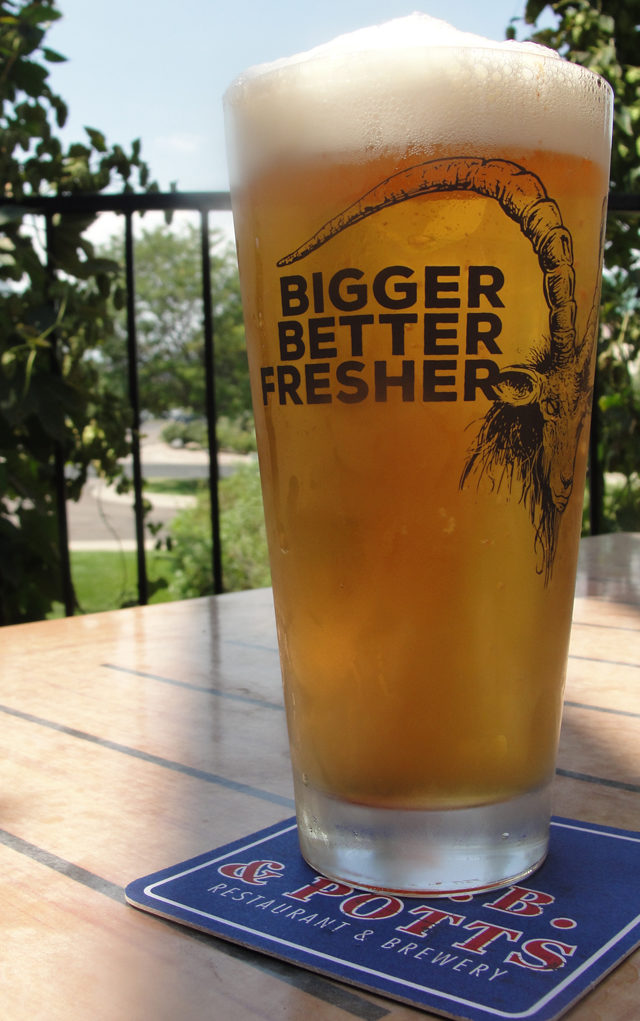 As it has become increasingly apparent, hopheads, lager lovers, wheaties and stoutettes are growing up and having families. That means a night out drinking isn’t likely to involve going to the local microbrewery, where running children might slam into a fermenting tank or trip over a drainpipe. But just because Mom and Dad have to take the kids to a restaurant with a good insurance policy and a large menu doesn’t mean they want to see the usual suspects of fizzy yellow beers on tap. That may have been the case a generation or two ago, but today’s parents are used to drinking flavorful, unique and fresh beer.

That is where places like C.B. & Potts come in. Here you can give the little one anything from chicken fingers to pasta while you put down a hoppy IPA or a robust porter.

The first C.B. & Potts opened their doors in 1974 in Fort Collins as a standard tavern; 21 years later, they got into the brewing game and started producing beer under the moniker “Big Horn Brewing Company.” Now Ram International Restaurants, based in Lakewood, Washington, owns all eight C.B. & Potts locations in the Centennial State, which has stabilized and streamlined their “deluxe tavern” approach. And with the spacious and inviting interiors and rooms full of activities, these deluxe taverns are the answer to the family that needs a night out and the parents who need a cold beverage.

Bernie Tonning is the man in charge of the suds at the C.B. & Potts FlatIron Crossing location. Tonning — who did a stint at Boulder’s Redstone Meadery and Great Divide Brewing in Denver — works with a ten-barrel brewhouse to put out seven core beers and three seasonal rotators; currently a pilsner, an IPA and a double IPA, Vesuvius (eight percent alcohol by volume), for those who have had a hard day at the office.

All seven mainstays are easy-drinking beers ranging from crushable — Home Town Blonde (4.5 percent) and Buttface Amber Ale (5.8 percent) — to full flavor dinner brews: Total Disorder Porter (5.2 percent) and ’71 Pale Ale (5.5 percent). Of the seven staples, Buttface (think rams fighting for dominance) reigns supreme. It’s a beautiful brown ale reminiscent of Newcastle with loads of malt and caramel, and it goes well with just about anything on the menu.

For the waning days of summer, C.B. Wapper Von Pils (5.5 percent) has a sweet nose with the delectable taste of crisp, clean hops. And once the weather turns for good, Bernie’s Destroyer IPA (7.6 percent) awaits. You can order Bernie on either CO2 or nitro, the former having a sharper edge and the latter rounding out those corners and sliding the hops right down the gullet.

As the saying goes: Growing old is getting old. But that doesn’t mean you have to give up the pleasures of untethered adulthood. You just have to adjust your aim a little.