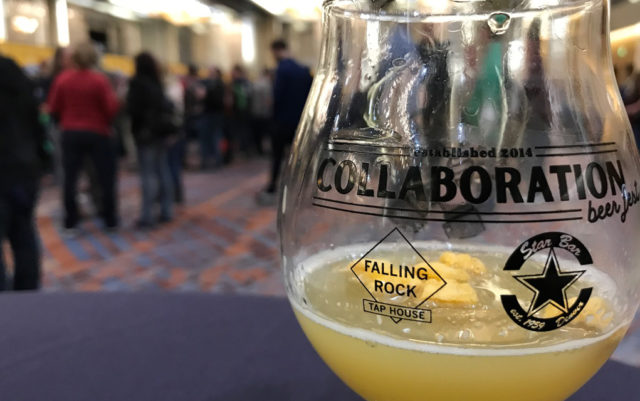 Craft beer is certainly headed into some rather odd territory.

At least that was one of the takeaways from last week’s Collaboration Beer Festival, the sixth-annual beer fest hosted by Two Parts (a craft beer event and marketing group) and the Colorado Brewers Guild. Established in 2014, CollabFest brings brewers together in the spirit of camaraderie and craft community to create something off the beaten path.

And off the beaten path these brewers walked in droves. Black Bottle Brewery and Accomplice Beer Company teamed up to make a Blueberry Protein Milkshake IPA, and it didn’t taste nearly as bad as the name might suggest. As the brewer explained, they used a vegan protein powder, which might account for the beer’s round and full mouthfeel without an unwanted chalky texture. It was kind of like a blueberry pancake that wasn’t cooked all the way through.

Jagged Mountain Craft Brewery, 105 West Brewing Company and Little Man Ice Cream whipped up a Rum Barrel-Aged Imperial Ice Cream Old Ale by using 30 gallons of chocolate cherry fudge ice cream and aged the concoction in Colombian rum barrels. Surprisingly, the beer drank easily — sweet and creamy with a hint of malt still making its presence known. Not so much with New Image Brewing and Molly’s Spirits’ Pistachio Ice Cream Stout; theirs wasn’t made with ice cream but had a flavor reminiscent of the sweet treat. It was also one of the stickiest beers at the fest, almost as if the brew was laced with chocolate syrup.

And these were just the beginning: Dessert Berliner Weisse with Yogurt, Mango Coconut Gose, Orange Cream Stout, Margarita Imperial Gose, at least two different Piña Colada Milkshake IPAs, a Cinnamon Roll Brown, an Avocado Beer and more juicy/hazy IPAs than you can shake a stick at. Walking around the Hyatt ballroom was like playing spectator to craft beer’s research and development department, and sugar was the star of the show.

No beer exemplified that better than Periodic Brewing, Mother Trucker Brewing and Donavon Brewing’s Kapn Crunch IPA, an Imperial Milkshake IPA brewed with pale malt, brown sugar, wheat, oats and Huell Melon, Southern Passion and El Dorado hops; fermented with a British ale yeast; and dry-hopped with Cap’n Crunch cereal. As an added kick, the brewers floated a few puffs of the Cap’n in each glass to those craving an extra shot of nostalgia.

Kapn Crunch IPA isn’t the first beer on the market to utilize breakfast cereal in the brewing process — though the trend is still rather new — but Periodic, Mother Trucker and Donavon’s commitment to the ethos of the beer comes through even down to the toppings. It’s not a beverage you’re likely to knock back with great frequency, but it is tasty in a confounding sort of way.

The beer market is certainly getting sweeter, but so are American palates. And if the plethora of sugary beers poured at 2019’s CollabFest is any indication, this is probably just the beginning.