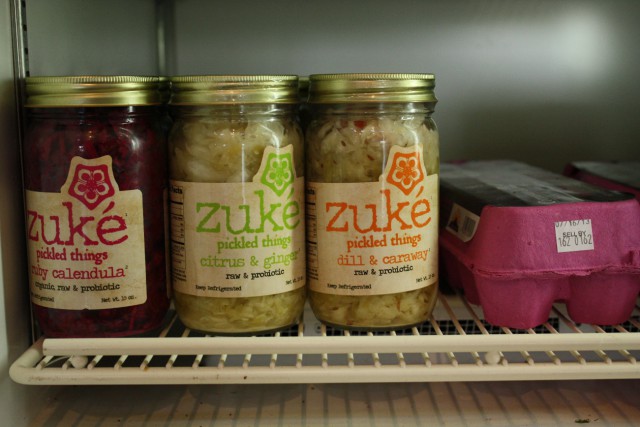 You wouldn’t think things stuffed in jars and steeped in salt, brine, spices or even their own fermented juices could be beautiful. But all lined up, pickles present a range of unique natural colors. There’s something enchanting about tidy jars all in row holding fragrant and shapely combinations of carrots, beets, onions, ginger, cauliflower, cabbage, soybeans and peppers. The result is far from our pickle archetype, but instead presents an artful array of colors, shapes, tastes and textures.

Throughout Boulder County, citizens and businesses alike are lining their shelves and pantries with a similar assortment of carefully pickled goods. A long-standing cross-cultural tradition has found its place in the community, in the form of instructive classes and local products.

Three Leaf Farms and Cure Organic Farm in the Boulder area offer classes in these time-tested techniques, classes that fill up quickly, according William Kelley, chef at Zucca Italian Ristorante and teacher of the pickling class at Three Leaf Farms.

“First day we had sign-up for this class, I mean granted it was only eight people, but it filled up on the first or second day,” Kelley says of the upcoming July 20 class.

Both Kelley and Marilyn Kakudo, pickling instructor at Cure Organic Farm, have noticed a resurgence of interest in the craft of pickling. So why the sudden interest in a process that has been in use for thousands of years?

“I think people are trying to eat closer to home. And here in Colorado since we don’t have produce year-round, the only way you can really eat local in the winter-time would be to preserve in some way,” says Kakudo, who teaches the six-person class at Cure Organic Farm.

Kelley, too, has noticed an increased awareness of pickling, particularly in the broader foodie world.

“Right now what’s trending are means of preservation like curing, smoking and pickling,” says Kelley. “Nationwide, you read a lot of articles from Bon Appétit to Food and Wine to publications in Chicago, New York, L.A.; all across the nation they’re doing pickles and whatnot. In Colorado we do have a little bit more want or even need to do it, because it gives us an extension of the season.”

But the term “pickling” is not limited to one specific technique. Quick pickling, fermentation pickling, relish pickling — all of these methods have received greater interest and recognition.

Kakudo will teach traditional pickling at her class at Cure Organic Farm, and attendees will leave with three jars of traditional cucumber pickles. Kelley, however, plans to cover all three techniques.

“I will be going over every process of pickling, from the quick pickle to the fermentation to the relish,” he says. “But we’re going to be making quick pickles to allow the people from the workshop to have something to take home with them.”

And amateur picklers seem to be open to different techniques, though fermented pickles are of particular interest to health-conscious consumers because of a recent wealth of information on the positive benefits of probiotics.

Boulder-based company Esoteric Foods has broken into the local fermented pickle market with its variety of krauts, and in two years has expanded from its first sale at Lucky’s in North Boulder to selling its products in more than 65 natural grocers. Co-founders Mara King and Willow King will also teach a class in pickling on Sept. 10 at the Lyons Farmette.

“For us fermentation in some ways is sort of a philosophy, if you will,” says Willow King. “It’s like this sort of magical interaction between the world we can see, the vegetables, the salt, the things that we’re touching, and this invisible world, which is all the microbes and the friendly bacteria that come into the process and make the food this super-vital, healthy, raw food that then, when we ingest it, kind of invigorates the whole digestive and immune system.”

Willow King credits the success of their Zuké “pickled things” to the supportive Boulder food and entrepreneurial community as well as the growing awareness of the health benefits of fermented products.

“I think there’s a real renaissance of sort of hands-on, do-it-yourself food processing,” Willow King says. “People are getting a lot more interested in where their food comes from, and once they know where it comes from, and how things are made, which is really how this business was born.”

In keeping with the conventional purpose of pickling, Esoteric Foods is trying to create much of its product at the end of the season, when there is excess crop production.

“We’re trying to buy as much local produce as we can when it’s plentiful, pickle it and then have it to sell throughout the winter until we break back out into spring,” Willow King says.

Pickles are not just practical, either. Many picklers are partial to the aesthetic qualities of pickled varieties. Willow King’s favorite Esoteric Food product is the Zuké beets, dulse and kale recipe, pointing to the deep purple color as part of her attraction to the recipe.

“My kids are huge fans of them,” she says. “You can always tell when they eat them because they have these big purple mustaches.”

King pickles for her young children, as does Kelley, who praises the process for its ease and low cost.

“I have three children, and a wife and a dog,” he says. “It gets expensive buying vegetables, unless it’s the summertime. The seasonality of it marks up the price. Pickling gives me the opportunity to have that type of ingredient to utilize on my own without having to necessarily pay for it.”

But many people do pay for their pickled goods, which can be found at local vendors for not-so-minimal prices. Lafayette vendor Isabelle Farm Stand carries Esoteric Foods products as well as the canned and pickled creations of Boulder-based MM Local.

The employees at Isabelle Farm Stand are no strangers to the pickled revolution. A big underground food movement is “starting to bubble to the surface and pickle,” says the farm stand’s wholesaler, Tyler Bair.

The place is teeming with farmers, all of whom seem to be extremely familiar with pickling. And most of their farmers do their own pickling, according to employee Annie Beall.

“Everybody gets the leftovers, and the best way to use them is to pickle them,” says Beall. “I bet there are a few of them around, they’d probably give you tips.”

There is one thing all picklers agree on: It’s easy to do. With one caveat: Be wary of the health risks of pickling at home. Kakudo warns about the hazards of air entering canned goods during the brine pickling process.

“There’s a whole science and food safety issue about canning; whenever you can food you have to make sure you’re canning food that has a certain amount of acidity,” says Kakudo.

According to a study by the Centers for Disease Control and Prevention, many home picklers and canners are unaware of the risks of Botulism, a serious illness caused by the bacteria Clostridium botulinum, which can find its way into canned goods if pickling methods aren’t executed properly.

Pickling in vinegar also tends to diminish some of the nutritional content of food, according to Kakudo and Kelley.

“The rule of thumb is that any time you take something from a raw state and you cook it or manipulate it, especially when you add intense pH levels on each side, you are going to break it down and it will lose some nutritional value,” says Kelley. “It’s definitely better to eat fresh and raw as far as nutritional value is concerned.”

Most pickles are used to augment a meal, whether through texture, spice or even color on the plate, and according to Willow King, many cultures have used fermented pickles to aid in the digestion of meats.

“It’s also just sort of a side, so you always have a pickle as a palette cleanser or a flavor enhancer with each course,” Willow King says. “There’s lots of fun creative ways to use it.”

Willow King suggests using Esoteric’s krauts on salads, in sandwiches and even in something like a fish taco. Kelley uses pickles at the Zucca Italian restaurant as a subtle palette enhancer.

“It’s a nice accoutrement to our paninis for lunch, our antipastis, our saloumis. We utilize pickles in lots of different ways. I’ve got pepperoncinis on my calamari dish, we have pickled red onions in our pork chop dish.”

And the vinegar brine in non-fermented pickles doesn’t have to go to waste, according to Kakudo, who suggests using the solution in place of vinegar during cooking.

However, the outburst of published books on pickling, pickling classes and pickling companies is still in its relative youth. It has yet to be seen whether the pickling craze will last as long as the preserved goods themselves.