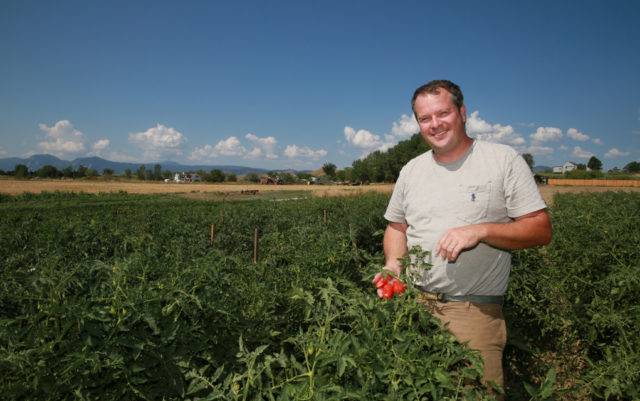 Eric Skokan had no idea how difficult it would be to grow a carrot.

“Literally something as granular as a carrot seed causes so many problems. How do you get them into the row spaced out well enough that you don’t spend the rest of your summer thinning them out?” he says.

So his first plan was to plant more seeds. Early in the season, he’d pick out the baby ones, which would create space for the bigger ones. The problem was that carrot seeds are so small, you can’t help but dump a lot of them in on each pass.

“My rows of carrots looked like a Chia pet. Like a solid carpet of tiny, tiny carrots,” Skokan says. “And then on your hands and knees, you’re pulling out thousands of individual carrots to make space. Completely wrongheaded. It just doesn’t work that way.”

That’s when an old farmer told him, “Oh, Eric. No one’s told you the carrot trick.”

“The carrot trick. Of course,” Skokan jokes. “The carrot trick is to mix your carrot seed 50-50 with play sand. The grains of sand are the same size as the carrot [seeds], and so when you sprinkle them out, you’re sprinkling 50 percent sand and 50 percent carrots, thus spreading out the individual amounts of carrots, right? And of course once I did that, everything became a lot easier.

Skokan is a lot of things. He’s a James Beard Award-nominated chef. He’s a farmer at the 130-acre, organic Black Cat Farm, likely the world’s largest farm-to-table enterprise. He’s an author, a student and a father. And yet despite those flaming chainsaws he manages to juggle every minute of every day, he speaks with such alarming patience that you can’t help but think he’s got something big figured out, even if it took a while to get there.

“In years one, two and three, it was every bit as hard as you can imagine. Let your mind wander through a sea of disasters in terms of farming and restaurants and integrating the two, and pretty much every one of those happened and often multiple times,” Skokan says.

Skokan didn’t know that he was “going to be a farmer, and have eight tractors and a combine,” when he began the Black Cat endeavor. But he remembers the moment out of which it was born. On a trip to the Basque region of France, Skokan and his wife, Jill, sat down for a meal at a restaurant where the owner, chef and waitress was just one woman named Marguerite.

“I saw her after our order leave the kitchen and go into her big garden,” Skokan says. “And then she came back 10 minutes later with an apron full of stuff from the garden, and then just a few minutes later the dishes started coming out of the kitchen. And at the time I was the chef at the Stanley Hotel, where when I needed to make a dish, I started up our forklift and I unloaded full pallets of premade things out of a tractor-trailer.”

On American Airlines napkins he still has, Skokan charted out what would become Black Cat on the trip home. The business plan was to “get as close as I can to the experience Marguerite gave us.”

Skokan had already turned the lawn all around his house into a big garden. But farming on a large scale provided a bigger challenge, one where failure was as abundant and free-willed as the weather.

“A big part of the success of the farm has been my determination to keep going despite the failure,” Skokan says. “My goal is when I grow a new crop, the first year, I hope to score a C-plus. I do a ton of research and give it a try, and if I score a C, C-plus, then I’m elated. And then the next year, I’m shooting for a B. And then maybe the third or fourth year, I’m shooting for an A.”

Skokan is a self-proclaimed voracious reader and relies in part on the wide variety of guides from American agricultural universities on how to grow almost anything. He also relies on a team of farmers at Black Cat and institutional knowledge passed down from other farmers in the area. Collectively, it provides solutions to the inevitable pitfalls on the farm.

For instance: “At the end of the first year, I had grown a spectacular number of turnips which were inedible,” Skokan says. “They were about the worst thing ever and I had this massive pile of them, and I decided that I needed to raise pigs so that they could eat up all of my mistakes, which, in the end, it turned out to be a wise thing because I grow a lot of mistakes along the way. And a farming friend of mine said, ‘Yeah, Eric, pigs are a farmer’s way of sweeping things under the carpet,’ and it’s true.

So do a staff of cooks that Skokan’s worked with for years, and a small team of farmers that he often relies on. Every day, crops are cut at the farm, where they’re cleaned and packed, and then shipped to the restaurant on 13th Street, where a team of chefs unpack the bounty and get to work. Within 14 hours, Skokan says, what comprises up to 90 percent of your vegetables at Black Cat goes from ground to plate. (Contrast that, he says, with the average bunch of kale, which takes a month to go from farm to plate, and is thus grown for durability, not flavor.)

Skokan says whether the dish or the crop comes first happens in both directions. For instance, he grew up in Virginia “eating [his] body weight in boiled peanuts” and thought it’d be neat to plant some in Colorado. It would at least be an interesting challenge, and he found his farm hands had experience growing the crop in Mexico. Conversely, the 14 varieties of carrots grown on the farm, for example, serve different purposes — from forearm-sized carrots for asserting presence to sweet, baby carrots for roasting and cooing at. Some crops, like the hailstone radish, are efficient because the greens of the plant make for pleasant salads.

Because Black Cat grows such a wide variety of plants on the farm, Skokan says cooking at Black Cat is daunting. Young chefs may know what to do with an artichoke, but can they manipulate a similar-tasting, but differently-constructed cardoon? Do they know that arugula goes from spicy to way too spicy after the first few 95-degree days of summer?

“Often, when they seem frustrated, I’ll say, ‘Hey, you know what? … Hitting a target is hard, but we give you a moving target every day. That’s really hard. Keep that in perspective; you’re not supposed to be good at it. It’s going to take a long time for you to become good.”

It’s abundantly clear Skokan loves what he does. He loves farming, it seems, more than anything else. After a while, that alarming patience with which he speaks comes off much more like joy, a quality that’s not getting a lot of press in 2017 America.

Indeed, Skokan says he often feels “like Jimmy Stewart in ‘It’s a Wonderful Life,’” mostly because of the support from the community, but surely, too, because of his ability to find joy in the chaos itself, bad radishes and all.

For a longer conversation with Skokan, listen below.