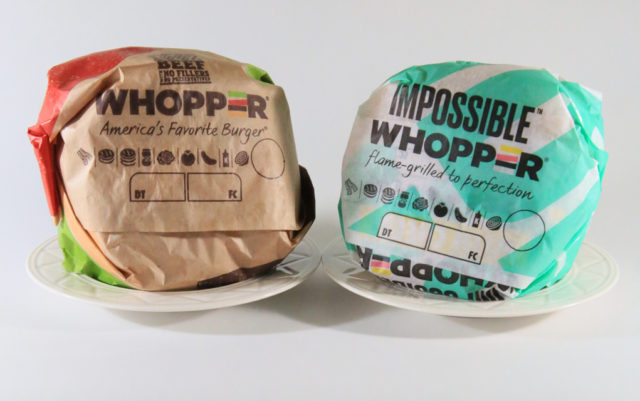 There was a Whopper to the left of me and an Impossible Whopper to the right as I sat at a local Burger King franchise. It’s fair to say that it wasn’t the ideal environment for an organoleptic analysis — appraising the look, aroma, taste and texture.

I had been pestered by ads promising that the plant-based Impossible was indistinguishable from the original Whopper. There was only one way to find out.

They look identical. Both the Whopper and its Impossible cousin feature fresh white onions, iceberg lettuce and tomatoes along with special sauce on a sesame seed bun with a pickle. The pinkish-grayish patties seem like an afterthought in this sandwich experience. Both versions fell apart as I tasted them.

At one point I was biting one Whopper and then the other and I lost track and couldn’t tell which I was tasting. The bioengineered Impossible does tastes similar to the beef edition, but I’m not sure that’s worth bragging about. Both patties have Burger King’s distinctive flame-grilled flavor but lack the juiciness of a griddled Wendy’s burger.

Impossible has used science to add the memory of meatiness with a smidgen of umami and general savoriness. The original Whopper has a little softer, moister chew than the Impossible, which adds little nuggets in the grind to mimic hamburger mouthfeel. Each cost more than $5.

In the end, I’m not sure flavor matters much. You’re not really supposed to appreciate the nuances of a fast-food burger. It’s a familiar feeding opportunity.

According to the manufacturer, Impossible Burgers are mainly made of water, soy protein concentrate, coconut oil, sunflower oil and unspecified “natural flavors.” The secret to its taste mimicry is in the yeast extract, cultured dextrose and especially soy leghemoglobin, the key to a slightly “bloody” look and flavor.

Nutritionally, the Impossible Whopper is no dietary gem, packing 630 calories, 34 grams of fat, 10 mg of cholesterol, 1080 mg of sodium and 58 grams of carbs. That’s without the fries and a Sprite. The iron and protein levels are similar to beef, as are vitamins B1, Niacin, B6, B2 and B12, which are added in.

No doubt it would be better for the planet if most beef burgers were replaced by plants. The company points out that Impossible Burger uses less water and less farmland that beef and produces significantly lower emissions. However, when you are sitting at Burger King observing the energy use, sugary drinks, the drive-thru lane and the landfill waste generated, including giant, plastic, one-use cups, it’s hard to view it as “green.”

Billed as “100% Whopper, 0% beef” by the company, the Impossible Burger is neither vegetarian nor vegan. “For guests looking for a meat-free option, a non-broiler method of preparation is available upon request,” BK notes online. The “savory flame-grilled patty made from plants” is cooked on the same broiler used for the beef and chicken patties so it gets smeared with second-hand meat grease. You have to put in a special order to get it microwaved or baked separately to get it meatless.

My Field of DreamS

Back at the end of last winter I started growing random greenery that now fills the railing on my apartment patio and attracts bees and butterflies.

I was given a packet of organic heirloom seeds for Long Island Cheese winter squash “long remembered as a great pie squash by people in New York and New Jersey.” I started them one morning, and they sprouted rapidly. I picked up seeds for Heavenly Blue morning glories and Autumn Beauty sunflowers. A friend gifted me a basil plant, and I bought a yellow pear tomato plant at a farm stand along with a “mystery” chile plant whose variety tag had been misplaced.

I was cleaning the pantry when I found a few organic white popcorn kernels scattered on a shelf. I figured “why not?” and got the corn to sprout.

The harvest is happening. I discovered that the chile plant is cayenne. Some of the spicy red pods have been roasted and are sitting in olive oil in the fridge. Others will get dried. Before the first freeze I’ll bring the chile plant inside for the winter.

I’ve gathered basil leaves to freeze and use in roasted tomato sauce using overripe tomatoes I got at a farm stand. When the basil plant started putting out flowers I clipped them and put them in a bottle of white vinegar in the fridge. It will make a fragrant salad addition. The handful of tiny golden plum tomatoes have gone directly into my mouth.

The winter squash has produced mainly blossoms. I stuffed some of the yellow flowers with whole milk ricotta, egg and basil. I dredged them in flour, fried them in olive oil and topped with tomato sauce. Finally, one tiny squash appeared so the season will persist. Two popcorn kernels survived to become short plants now bearing two tiny tasseled cobs. I don’t expect to harvest any popcorn on my patio but that’s OK. It’s my personal Field of Dreams.

The final Lafayette Farmers Market of the season is Sept. 27. … If you have a full fruit tree in your yard you aren’t harvesting or would volunteer to glean fruit from local trees to fight food insecurity locally, contact fruitrescue.org … Stop by the Rocky Mountain Fresh farmers market booths while you can to grab a bottle of limited edition Grandma Tutu’s Roasted Tomato Sauce. Grandma herself makes this delight using farm-grown roasted tomatoes, peppers, onions and garlic plus olive oil and balsamic vinegar.

“The olives bobbed peacefully in fragrant buckets of vinegar and thyme. At night the men ate heartily, flat bread and white cheese, and were happy in spite of the pain.” — Different Ways to Pray by Naomi Shihab Nye